MOSFETs blowing up on BLDC motor controller upon battery connection 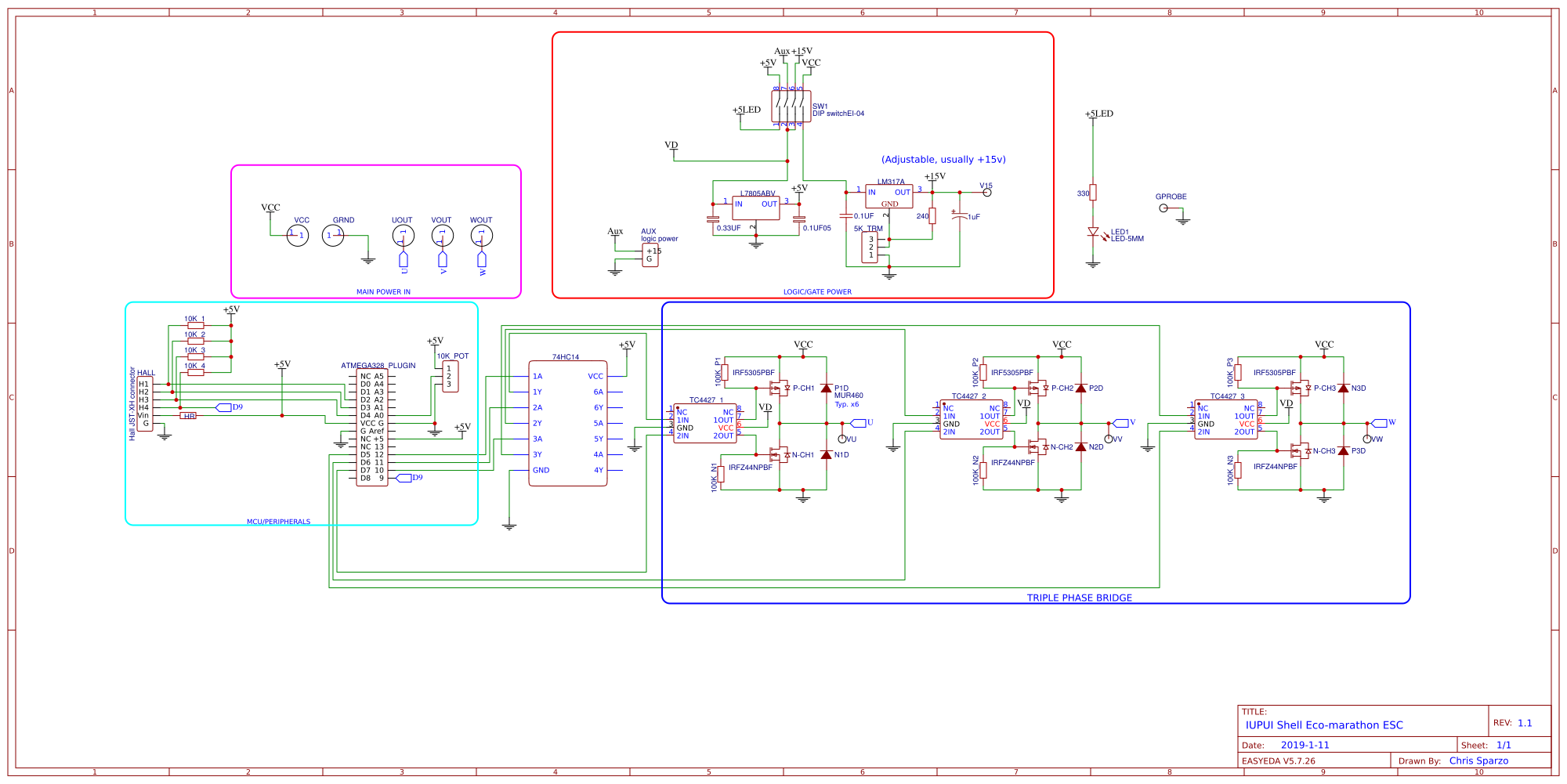 I'm trying to build a sensors motor controller for a 500 watt bicycle hub motor. The problem I am having with it is when I connect power (4500 mAh 12s lipo) I usually destroy a transistor or two immediately.

At first, I figured the problem was too much current in the MOSFETs so I got bigger ones capable of 120 amps, 480 amps pulse (much more than the battery can even do) and it still broke the transistors, although not quite as loudly.

Next I figured that timing could be the problem, so I left the MCU disconnected when I applied Vcc - issue still occurred.

I then added pull-up/pull-down resistors on the bridge to make sure they weren't in some kind of floating phase - issue remained.

Let me clarify a few things about the schematic:

High side are P-channel, low side are N-channel, 100k resistors on the pull-up/pull-down, schmidt trigger mainly to invert signal to P-channel so they are active high from MCU (ATmega328). No gate resistors (from what I read this only slows down switching which could make matters worse).

I really am lost as to what the problem could be here. I still haven't tried putting pull-up/pull-down resistors on the drivers or messing with the code too much, because I figure the code doesn't have much to do with it at this point since the issue occurs without hooking up motor or MCU. I wanted to stop for a minute and see if I'm missing something obvious before I go on, because I feel like I'm just rapid firing trivial changes at this point.

There's a lot amiss here. The TC4427 is only rated to 18V on the Vdd pin. You don't show what the Vd supply is set at, but it needs to be at the Vcc that is applied to the top FETs so that it can pull the gate up on the P channel FET to turn it off. Vcc with a 12s battery is going to be 40-45V... If Vdd is connected to Vcc, you'd then (assuming that the TC4427 hadn't failed) be applying the full 40+V to the gates - these are only good for 20V. You'd need to generate a high side gate drive supply at Vcc less a suitable drive voltage (10-15V). Lastly, and certainly not least, look at the body diodes on the output FETs - the high side one will always be conducting. The source and drain pins should be swapped.

I'd suggest looking up a reference design for a bridge and gate driver circuit. You can find ones that use drivers that don't need the inverters, have shoot-through protection (that prevent both FETs being on at the same time) and incorporate a bootstrap supply for the high side FET). Most use N channel only, since the Rds of the N channel FETs is a lot lower. 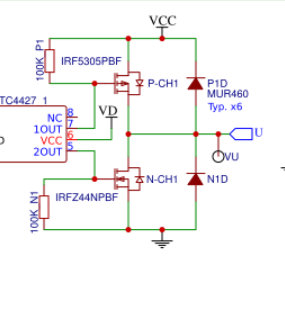 As soon as you turn the N channel MOSFET at the low side of your h bridge on, the body diode of the P MOSFET becomes forward biased, and a large undefined current will flow, probably taking them both out.

Not the answer you're looking for? Browse other questions tagged mosfet power-electronics brushless-dc-motor phase or ask your own question.

8
Blind Driving a Brushless DC Motor BLDC
0
BLDC Motor running fine for 1 minute, then stuttering
12
High Voltage PWM Motor Controller - Mosfets Explode
1
BLDC motor taking excessive current
0
Can I use this BLDC controller for RC motor for friction drive eBike?
0
Need help for using N-Mosfets to switch on either one battery or the other
0
BLDC motor shaft getting hot