Troubleshooting a faulty filter circuit in a PAL CRT display

I have an old CRT monitor (Phillips CM8833) which I am attempting to repair. When displaying a composite PAL signal, it only shows a black and white image, but it is still able to display RGB signals correctly.

The composite signal is filtered into chrominance and luminance portions, with the chrominance signal sent into a TDA4510 color decoder. The U and V output are fed with the luminance (Y) into a TDA3505 control chip (which can also switch between the composite/YUV and RGB inputs, hence the RGB is unaffected). Here's an overview of the circuit:

I see the indicated signals at test points 9 (input) and 8 (luminance) but not at test point (chrominance), which suggests a fault with the filter circuit between points 9 and 7:

I've desoldered and tested all of these components individually, and all the resistors and capacitors appear to be within specification. (I've also replaced the TDA4510, as a precaution.) The inductor, S555, doesn't have a value listed on the circuit diagram or the parts list, but it matches the value of the color bands on its side (red, violet, black, gold, making 27uH).

I've been reading up on the operation of PAL systems, and I think that this monitor is using a bandpass & notch filter to isolate the chrominance and luminance signals. (The CM8833 service manual mentions adjusting S533 to calibrate the "4.43MHz blanking circuit in the luminance circuit", which suggests it's using a notch filter.)

I'm left with some questions:

This parallel resonant circuit includes both caps in parallel to tune at 6.0 MHz. This is the sub-carrier channel in PAL for audio.

The resistors form a 'T' pad attenuator to reduce reactive loading effects on previous source from shifting phase, while attenuating 18dB then raising the load impedance on LC tank to reduce the resonant Q and increase bandwidth, BW of the tank circuit to about 1MHz. 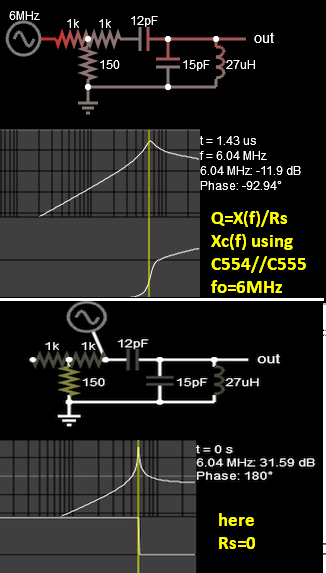 The R pad is necessary to prevent reactive loading effects ( phase shift) on the previous stage shared with video yet raises the source impedance to parallel resonance to reduce the Q and sensitivity to component tolerances or drift but resonance still provides a gain of 6dB with a -3dB BW of about 1MHz,

For it work as the Chroma Burst resonator, L555 must be around 52uH 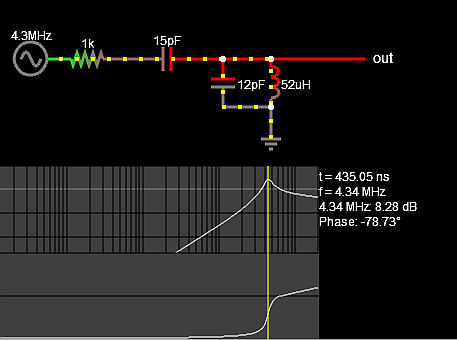 Not the answer you're looking for? Browse other questions tagged filter repair video crt or ask your own question.

4
How much resistance is too much resistance for a video switch?
2
How can I separate the sync signal from a composite video signal?
2
Can a composite video line doubler be made using simple hardware components? (composite -> progressive scan)
3
SCART to VGA adapter - green picture
3
Rainbow artifacts in composite video
0
How to bypass the functions of an IC
1
Composite Video Driver Design - PAL
0
What sort of filter is in this old TI application note?
0
Replacement NTSC colorburst crystal won't oscillate
0
PAL Video - Horizontal Color Pixels