I have a transformer with 2 input leads and 3 output leads. I hooked up an LED to 2 of the output and put a dead AA battery on the input and the LED blinked for a second. I have no data on the transformer, but I am wondering if it is possible (and if so what is the schematic or instructions on how to do it) to put a low voltage oscillator before the transformer. I know how to work with 12 volts with a power MOSFET and a 555 timer, but my question is if this is possible with low voltage. Any information is great.

If you don't know anything about the transformer then just give it a try and see what you get - a blocking oscillator can be made with just about any transformer, so the chances are pretty good it will work first time. There are a couple of variations of the "Joule Thief" (blocking oscillator) circuit, here is the most basic: 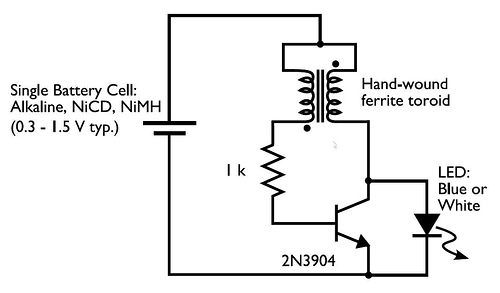 The transformer does not have to be the hand wound toroid shown, and the transistor can be any general purpose NPN bipolar. Note the windings must be connected in opposite polarity (dot convention) You may have to vary the resistor a bit to achieve desired operation (frequency should increase with resistance)
As it happens, I wrote a blog entry a while back on the blocking oscillator circuit used in a buzzer, which was itself part of a cheap "mole repeller". It discusses the operation in a little more detail and shows an alternative topology, so may be of some use to you (you want the bit under the heading "what frequency does the buzzer run at?")

EDIT - to clarify about the connections and some caution:

Since you have a centre tapped secondary, you should be able to use this assuming it's a standard centre tap - the centre tap would the topmost connection to V+ in the circuit above, then one lead to the resistor, and the other to the transistor collector.

In all cases, make sure you have a load (e.g. your LED) connected before you apply power - otherwise you may get pretty high voltages developing at the transistor side, which will damage it. Also, as Acme Fixer points out wisely, if it's a mains transformer you will get high voltage developing at the primary winding, so make sure these are insulated well. The currents will be low from a much stepped up and half dead battery, but could still give a nasty zap so treat with caution.

The winding with three leads is most likely a low voltage AC with a center tap, such as 12VAC with each side giving 6VAC. You can use them to build the Joule Thief circuit already shown, but remember that the other winding with two leads is most likely a 120VAC or 240VAC winding, and can give you a shock once you get the circuit running. Use only a 1.5V battery but no more for a single LED.

Here is a Joule Thief simulation that you can use to see exactly how the circuit operates, by moving the waveform probes around to see the relationships among the voltages, currents and (very importantly) the flux build-up/ramp-down inside the transformer! https://www.systemvision.com/design/joule-thief-transformer-physical-design

This is in the free, on-line SystemVision simulator. You can make a copy of the design and then make any changes to it that you want. You just re-simulate to see the result of those changes. This "virtual test-bench" is particularly useful to see the effect of the physical properties of the transformer, such as the core size, material properties, number of turns on the windings, etc. Enjoy!

Not the answer you're looking for? Browse other questions tagged transformer oscillator or ask your own question.

0
Why Led lights with 3 AA batteries and not in pairs?

11
Low power, low voltage, slow (0.1Hz) oscillator?
6
Vacuum tube LED flasher
1
How to control squarewave oscillator with comparator output? (LM339)
4
How is a sine wave created by an oscillator?
0
PWM with Oscillator does not dim LED display as expected
0
Inverter using Wien Oscillator
1
connect an oscillator to a transformer
0
How to check for quick oscillations without an oscilloscope
2
Understand the Joule Thief circuit
3
555 timer that does not output low when reset