What are the names of all possible logic gates with 1-or-2-bit input and 1-bit output?

This seems to be a silly question, but the fact is that when I tried to search for related information, none of the search results gave me satisfactory answer.

I just found this Wikipedia article by chance, which names all 16 gates (operations).

Most of the two-input gates have a single name (AND, OR, etc.), but single-input gates are named not only after the logical function (NOT), but also after the effect they have on the signal or the function they have in the circuit ("inverter", "((non-)inverting) buffer/driver").

The gates marked in red are not widely used, so there are no common names for them. Implementations actually exist in configurable multi-function gates (74xxx1G57/58/97/98/99), but only as a side effect of the configurability. The SN74LVC1G97 datasheet describes them as "(N)OR/(N)AND gate with one inverted input", and that is probably the easiest way to understand them: 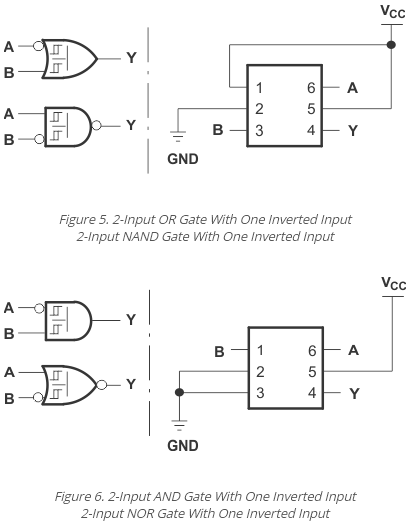 What you label as Gate-1011 in your table is known as an "IMPLY Gate" in this source. Another name for your "Identity gate" is called a "Buffer gate"

However, there is no official source for what you're looking for that contains information on name convention for complex logic other than just slapping other logic gate names together. You are looking for names of potential logic that contain conditional and/or combinational logic that depends on the state of particular input variables where they are time-independent, meaning that you will get result instantly as if it was a mathematical function.

But if you're asking for an official name to spots in red above, there is none (yet). I believe that the example you provided above, NXOR is probably as close as you're going to get. Why there's an "N" before the "X" is probably an that all inputs are getting negated before entering the block diagram itself. This wouldn't be true for NOR and NAND, however, as it would be NOT-NOR and NOT-NAND, as you have pointed out.

Perhaps you can make something up, i.e. ONOR gate with one of the inputs negated and NNOR where all the inputs are negated.

The three main logic gates include: NOT, OR, and AND. Everything else may contain one of these three. For instance, a NOR gate could simply be a OR gate with a NOT gate at the output of the OR gate. (With transistor logic, this is a different story.)

Wrap up: There is no official source that would give names to every single possibility. This is probably because we simply don't care to name it. Unsatisfying, yes, but whether or not we're simply that dedicated to give it a name is entirely subjective. Who really cares? If the excuse to give them names is to have completeness, then how often would we even use these names if we gave them names?

Not the answer you're looking for? Browse other questions tagged digital-logic truth-table or ask your own question.

5
Making 2-input AND gate, 2-input OR gate and NOT gate using only the "SAND" gate
2
Inclusion gate as universal gate

32
Why have two NOT gates in series?
6
How does a non-FPGA (ie a PC with a CPU, RAM, hard drive) mimic logic gates?
5
Making 2-input AND gate, 2-input OR gate and NOT gate using only the "SAND" gate
1
Understanding D flip flop function - what this thing does
2
Help building Digital Logic Circuit (from truth table and state diagram)
0
create truth table of subfunctions based on main function truth table
3
Difficulty in understanding the analysis of worst-case signal propagation delay in an array multiplier
0
8 bit Analog to Digital, Then Convert to a 1 to 8 level LED display