How to debounce a low pulse switch for automotive lighting

Hoping you guys can give me a hand with some wiring that I can't quite figure out!

Background: I'm trying to rewire a set of automotive lights - these are normally controlled by a computer but I'm trying to bypass that. I'm using the original light switch which is low pulse, and all the original stuff past the fuse panel, including the relay to drive the lights themselves, so I'm just handling sending a control signal out to that.

Current Setup: Right now I've set up a latching relay that is triggered on the low pulse of the oem switch, and sends 12V to the lights to turn them on. It's working in general, pressing the button turns the lights on, pressing it again turns them off. It looks something like this: 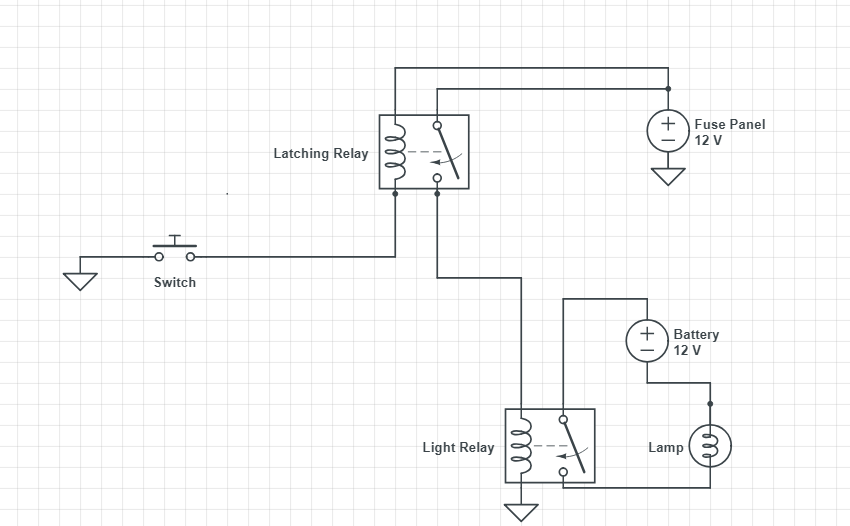 The issue: The switch bounces, resulting in inconsistent behavior. Lights flipping on and off rapidly when you press the button once, etc.

I'm pretty sure what I need is some kind of RC debounce circuit, but I can't wrap my brain around how to do it without short circuiting something. I only have access to the one wire coming from the switch, which is grounded when pressed.

I feel like there's something I'm missing here to make it work, any help would be greatly appreciated. I'm hoping that this can be solved without adding too many more components (a capacitor and resistor or two?) but I keep thinking my way in circles.

EDIT: Realized my diagram may be confusing. The 'Latching Relay' is not just a basic relay, it's a small circuit that's functioning as a latching relay. It's a black box to me though, I just supply +12V, Ground, and the low pulse input, and it toggles my 12V output. The issue is it's bouncing when I pulse the switch

With no information on what is in the box we can only guess. The first thing I would try would be to put a capacitor across the switch; .1 uF would be a good choice, maybe more?

Adjust the resistor value till you get the response characteristics that you want. Depending upon the sensitivity of the circuit in your "black box" latching relay you may also need to install a second resistor between the top of the capacitor and the "coil" of the latching relay.

You forgot to add a reverse diode across switch rated for coil current. This will clamp the voltage on the release of the coil to dissipate the coil current. e.g. 1N400x

Not the answer you're looking for? Browse other questions tagged switches relay automotive debounce or ask your own question.