How much mains leakage does an Ethernet connection to a PC induce, and what is the operating leakage path?

It seems that some users on another Stack have reported GFCI nuisance trips caused by mains leakage through twisted-pair Ethernet cables connected between computers on different branch circuits, or more specifically, between a computer with a Class I, chassis-mounted, supply conforming to IEC 60950 connected to a grounded receptacle with UL 943 Class A GFCI protection, and a switch that is a Class III appliance with a Class II power supply, connected to a grounded, but unprotected, receptacle on a different branch circuit.

While, conceptually speaking, the idea that there could be a leakage path through the data cable makes some sense, and I have seen Ethernet reference circuits that have termination RC networks from the port-side center-tap terminals in the magnetics to chassis ground as well as a 1nF capacitor between chassis and signal grounds, it seems to me that it would be very poor engineering for this leakage path to allow the mains leakage current to rise to a magnitude exceeding the IEC 60950 standards.

What is the magnitude of this Ethernet-connection-induced leakage current rise, what factors in the design of the equipment involved control this rise, and can someone describe to me the precise leakage loop involved?

The ethernet connection leakage current should be negligable, with UTP. Every port has a array of transformers for high frequency, the leakage at 50 Hz common mode will be very low. 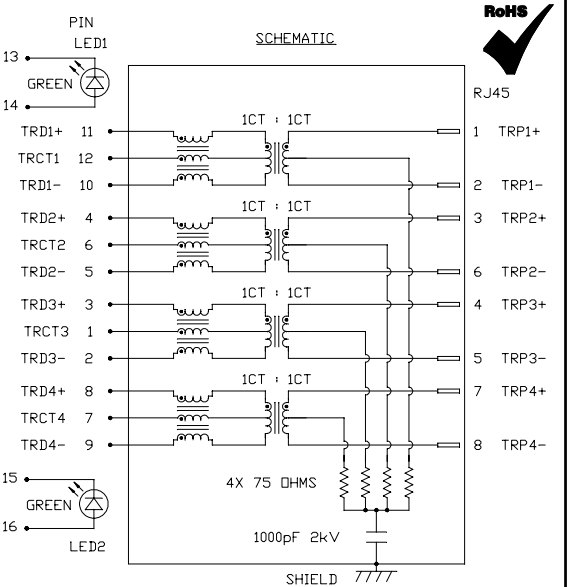 However, if shielded cable is used, S-UTP or CAT7 cables, there will also be made a chassis connection between the two devices.
Then the power supply leakage enters the equation, and those may leak several milliamperes.

The simple act of reversing the plug might remove the nuisance tripping of the GFCI/RCD.

I had some original experience at work where we coudn't get the new portable generator to power more than one computer even though the old one did. We eventually bisected it to the GFCI outlet in the new generator.

Later on, I had to track down why my AFCI breaker kept tripping. The electrician I called tested the AFCI breaker by bridging a resistor between power and ground. That tripped it. He said that AFCI breakers work by detecting ground faults. I originally said he was nuts, but it turns out it was true.

And that's just that one capacitor. I haven't been able to locate the indicator LEDs yet. I've noticed that the connection indicator LED on quite a few computers will light even when the board is unpowered but not when unplugged. Conclusion: that LED is tied between the Ethernet cable on one side and the ground on the other, and that ground is often the neutral wire rather than the house ground (two wire devices ...).

Now the electrician was in fact telling the truth. Old series AFCI breakers would trip at something like .1 amps of ground loop by specification. The gigabit switch I was using at the time was a two wire device (no dedicated ground) so all of that current had to go into the neutral wire. New AFCI breakers have since been fixed to work by other means than ground fault detection and replacing the AFCI breaker was the solution.

GFCI outlets are documented to trip at .004 amps. Guess what happens when you run Ethernet cables between devices on different circuits where one of them doesn't have a ground wire. And I'm pretty sure from the bisection that most of these cheaper power supplies were tying the motherboard ground to the neutral wire not the ground wire despite the ground wire being available.

Tripping a GFCI usually occurs when there is a missmatch between the current going in and the current going out. While there could exist mutual inductance between cables, I don't think it would generate enough current because properly designed Ethernet ports have megaohms of impedance at DC. I'll find some impedance graphs for the chokes tomorrow, but if I remember right there is high attenuation for lower frequencies through chokes, and highly unlikely to pass much current 60Hz through DC.

If the cable was improperly built there could be a pathway there.

Not the answer you're looking for? Browse other questions tagged ethernet leakage-current or ask your own question.

3
Does an ATX power supply have any isolated outputs?

4
What does the Arduino ethernet shield connect to?
3
Ethernet phy connection: grounding between chassis, connector and IO
1
Non-isolated mains circuit and Ethernet
2
Adding a resistive path between live conductors and earth - safety issues
0
Does the 802.3 Ethernet standard provide a recommended circuit design?
4
Isolation transformer and AC potential between grounds
3
What is GMAC/EMAC and does it define a physical connection to an ethernet chip?
6
How does Ethernet magnetics work?
0
how can homeplug device send ethernet down mains wiring