I'm creating a soft-latching circuit for my project, using a 2N3906 PNP transistor and an N-Channel IRLZ44N MOSFET. The circuit is fairly simple; Once switch one is pressed, it brings the gate of the MOSFET high, which turns it on, which also brings the base of the 2N3906 low, effectively turning it on allowing for current to flow from the emitter to collector then to the gate of the FET latching it on. However, I need a little help understanding the 2N3906.

What is going on here? I would like to try to use some math to calculate these values and not just throw in something that works. I'm very curious why it didn't work without R2, and why I was seeing 2.4V at the gate even though I hadn't pressed the switch.

Also in order to calculate a base resistor for the 2N3906, you need to know the current that is flowing through collector-emitter junction, however, since MOSFETs are not current driven, how do I calculate this? 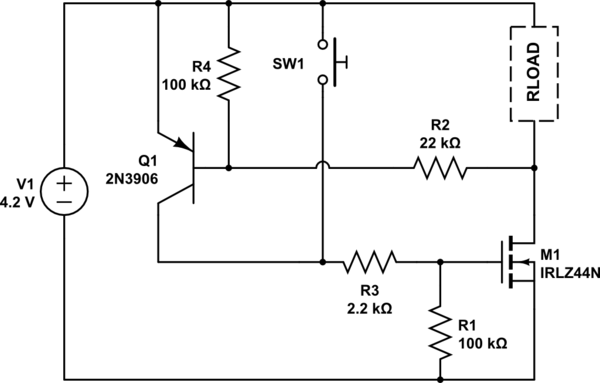 I'm assuming you want to keep using an NFET and a PNP BJT for the circuit. (There are other combinations.) So here's a modification (trying to stay closer to your schematic) that I'd like to suggest for your consideration: 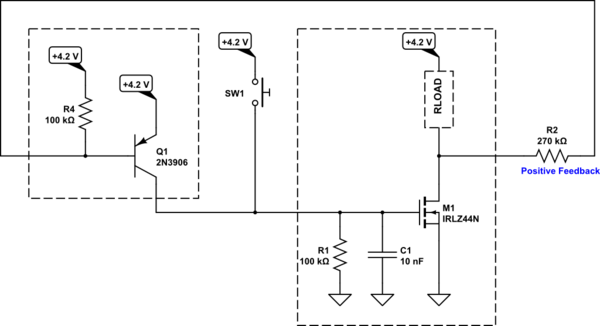 I have a problem with MOSFETs in a circuit like this because of the positive feedback provided by \$R_2\$ and because, when power is applied to the load, this can pull upward rapidly on the gate and trigger things without pressing the switch. So, taking the \$Q_\text{gd}=25\:\text{nC}\$ value from the datasheet on this beast (works out to the low nanoFarad range in my mind), I've added \$C_1\$ to overwhelm it and hold \$M_1\$ off long enough for the circuit to power up okay. BJTs aren't so bad as this, but I went ahead and added \$C_2\$ (much smaller valued) just in case. \$C_2\$ probably isn't needed. But why not?

MOSFETs can have a nasty self-turn on behavior (a reason I use them less often than I might otherwise), made only that much more of a worse concern when you are using positive feedback in a switch like this.

MOSFETs are sneaky. BJTs have their problems, too. But I tend to worry more about MOSFETs in a circuit like this.

Hmm. Look how much I've written and all I've explained is the addition of one component! That's a MOSFET for you. And they cost an arm and a leg, besides.

But the following would be more my hobbyist preference. The switch itself is directly exposed to the MOSFET gate. Static charge in your body near the switch might be an issue. Rather than messing with the existing gate capacitance, I'd prefer something like the following: 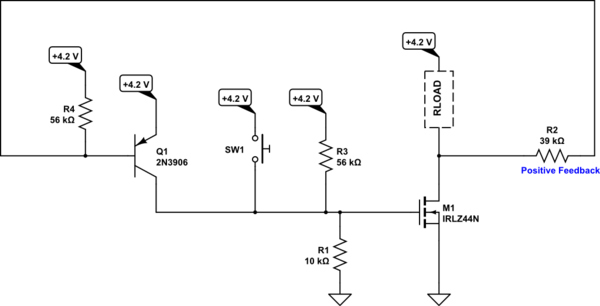 Here, \$R_1\$ and \$R_3\$ are a simple, yet sturdy voltage divider that will easily deal with any static charges near the manual switch that may try to charge the gate capacitance. They also rapidly remove any gate charge when power is removed, resetting the circuit quickly. And finally, they hold the gate (when power actually is applied) to a voltage of no more than \$4.2\cdot\frac{10\:\text{k}\Omega}{10\:\text{k}\Omega+56\:\text{k}\Omega}\lt 640\:\text{mV}\$. That should keep it off until the switch is pressed. Once the switch is pressed, \$R_3\$ is bypassed and that pulls the gate up and turns \$M_1\$ on, which then through \$R_2\$ pulls \$Q_1\$ on and then \$Q_1\$ keeps \$M_1\$'s gate held up after the switch is released. Same number of resistors as you were using before, same parts. Just different values in a slightly different arrangement.

Considering an ideal mosfet (turned on), with the switch open, you could consider the following equivalent circuit for the bjt: 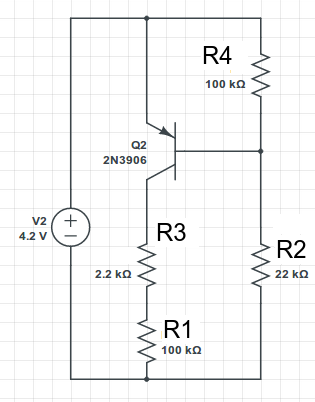 R4 in parallel with R2 (Thevenin equivalent) should be enough to saturate the bjt when conducting with an equivalent collector resistor = R1 + R3.

R2 must also be large enough to avoid burning the BE junction when the mosfet turns on.

Not the answer you're looking for? Browse other questions tagged transistors mosfet bjt latch latching or ask your own question.