CAN bus with star configuration/long stubs

I am assisting in the development of a machine, and have been tasked with achieving high speed CAN (as close to 1 Mbit/s as possible) in a star configuration. The restrictions are: each arm is approximately 2.5 meters long; there are 8 arms, probably increasing later to 16, each with a single node at the end; only a single CAN cable can run out/along each arm, meaning daisy-chaining won't work; there will be one central node which will communicate with all 8 others.

If I implement a very short bus (in the order of centimeters) with very long connections to the nodes branching off it, will that work? Alternatively, could I simply connect all 8 together near the central node and terminate at 2 of the other nodes (making what would essentially be a 5m bus)? The central node will be connected to a PCB at the centre, which will act as a junction of sorts.

EDIT: After further research, I found recommendations that stubs be kept to 0.5m or shorter, which is problematic. My current thought is now to have on the PCB one bus and 8-16 transceivers (not including the central one). Each of the 8 transceivers would then be connected to a separate bus, which would be run out along an arm to the node there. I could simplify to 4-8 transceivers, each reaching 2 arms, which would become the 2 ends of that bus, but this could cause problems if one of the arms were to be removed/shut down.

Try a termination on the end of EACH of the 2.5 meter branches, like this 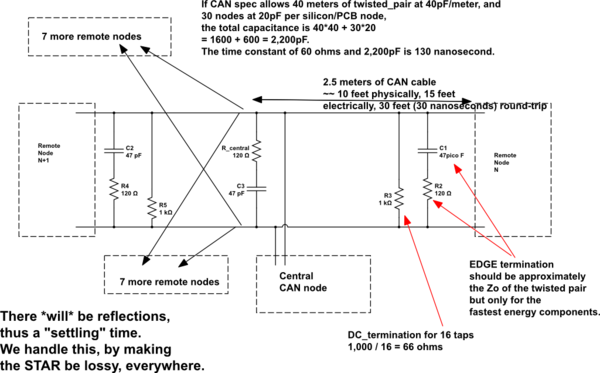 The max length is 2 branches * 2.5 meters each or 5 meters. The STAR reflection time is (assuming 30 nanoseconds round trip for each branch) 2 branches * 30nS or 60nanoSecond; this is twice as fast as the 130 nanosecond RC timeconstant I computed in the top TEXT in the diagram.

After some testing, it turns out that if you just go ahead and make a star configuration, effectively a zero length bus with 8 unterminated 2.5m stubs and a single central termination resistor (I couldn't see a difference between 60 and 120 ohms, though I feel 120 should theoretically be better), it will work - or it did in my case. My PCB is now essentially just an 8-way junction with a termination resistor in the middle, and everything seems to be working perfectly with unterminated nodes.

Not the answer you're looking for? Browse other questions tagged pcb wiring can bus or ask your own question.

8
How to check the CAN bus is free or not
7
Most efficient way to handle addressing / termination in a daisy-chained CAN bus?
2
Issue with the AMIS42700 CAN bus extender
8
Effect of splices on 120 Ω twisted pair cable impedance a.k.a correct way to attach stubs to the bus?
1
Mixing CAN nodes with and without transceivers on one bus?
2
How would I place CAN termination resistors in a 3 ended configuration?
0
CAN Bus: Nodes powered by different Potential Sources
0
Star configuration using CAN Bus, I2C or RS485
1
Addressing scheme with CAN bus