If Manufacturer spice model and Datasheet give different values which should I use?

I'm trying to simulate an LED circuit but I am getting a large difference in results from the simulation vs calculations done using the datasheet information. In this case both the spice model and the datasheet info are direct from the manufacturer. Given the large difference in results, I'm wondering which information I should base my design off of.

In this case the datasheet shows a typical Vf of 2.1v, the spice model seems to be using a Vf of 2.134v. I'm wiring 4 of these LEDs in series with a target of 18mA. Assuming a 9v source if I use a 33.3333ohm resistor (or resistor combination) based on the 2.1Vf of the datasheet I get a simulation result of 13.9mA instead of the expected 18mA.

I'm attaching the specific simulation and Datasheet in this example here as well. I'm using a SML-P12WTT86R model LED from ROHM Semiconductor.

The datasheet is here.

Here is what I got from the spice simulation using ROHM's spice model. 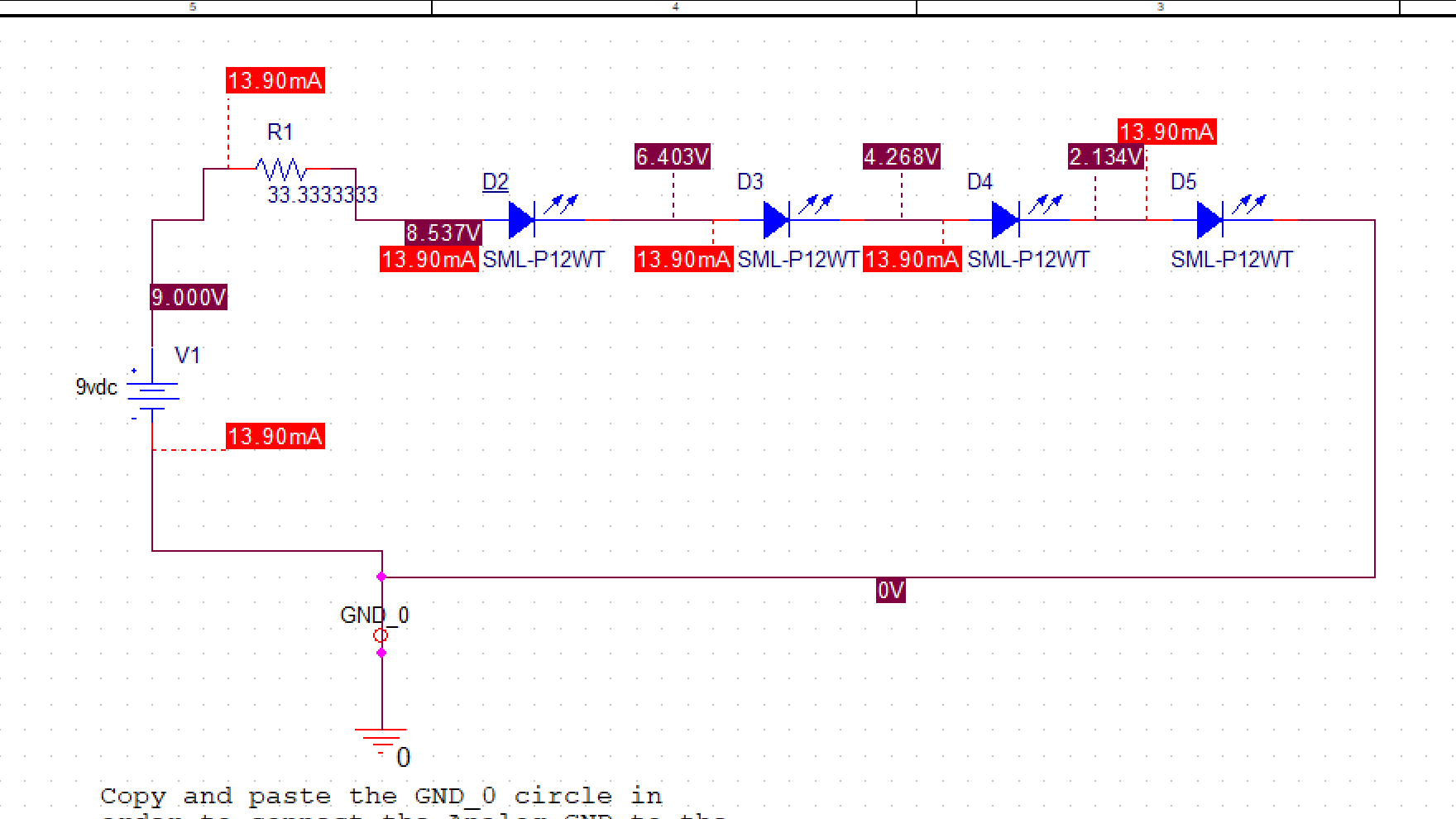 Always follow the datasheet. I strongly recommend looking up some of Mike Engelhardt's videos or attend one of his seminars (Arrow sponsors a lot of them). While you're not using LTSpice, Mike has a very deep understanding of Spice simulation, the good, the bad, and the ugly. The reality is most Spice models are made by people that don't really understand them (aka. interns) and can't be trusted a large percent of the time.

In this case the datasheet shows a typical Vf of 2.1v, the spice model seems to be using a Vf of 2.134v.

The forward voltage will vary due to manufacturing variations and junction temperature. And the variation will be more than 35 mV over realistic operating conditions.

Assuming a 9v source if I use a 33.3333ohm resistor (or resistor combination) based on the 2.1Vf of the datasheet I get a simulation result of 13.9mA instead of the expected 18mA. ... I'm asking since if I'm wrong either the LEDs will be too dim, or they will blow out.

If this application requires the brightness to be controlled so carefully that the difference between 13.9 and 18 mA makes a difference, you should use a constant current LED driver instead of a simple resistive current limiter.

But in most applications, users won't notice the difference in brightness due to this kind of current change. So you just live with some brightness variability to save cost. Modern LEDs are visibly lit even with 1 mA forward current so whether at 13.9 or 18 mA they will be quite bright.

You could also reduce the variability by designing your resistive limiting circuit with more voltage overhead. Either use a higher voltage source (12 V maybe) and a larger resistor, or place 2 strings of 2 LEDs in parallel, so you have roughly 5 V overhead instead of just 1. The trade-off here is of course more power wasted in the resistors.

Not the answer you're looking for? Browse other questions tagged led datasheet spice pspice or ask your own question.

2
How do I model an LED with SPICE WITHOUT access to a Manufacturer's Datasheet
0
How can I work out which pin is which in SPICE model
10
Modelling heat transfer from Power LED to metal bar
0
LTSpice error with the V() function in a subcircuit
0
Does spice model saturation recovery of bipolar transistors?
0
What datasheet should I trust for TIP 35 and 36?
0
How does one find what base current to use in simulating a phototransistor?
2
Why does my SPICE simulation have a different lambda value from my model files lambda value?
1
Diode-clamped five-level inverter simulation with PSpice
2
How can get my LM2776 simulation in KiCAD working