I'm a beginner to circuits. Unlike many other questions, my circuit involves a parallel circuit with a LED on one path but a resistor on the other, as shown in the picture.

Q1: assuming the LED has a 3V voltage drop, does this mean R1 will have to drop 6V even if the LED is on parallel?

P.S. This sort of looks like a voltage divider, but the problem is that the LED does not have a separate ground but is connected back to the same battery, which then makes the circuit parallel and I'm assuming thing work differently. (And it did in my simulator) 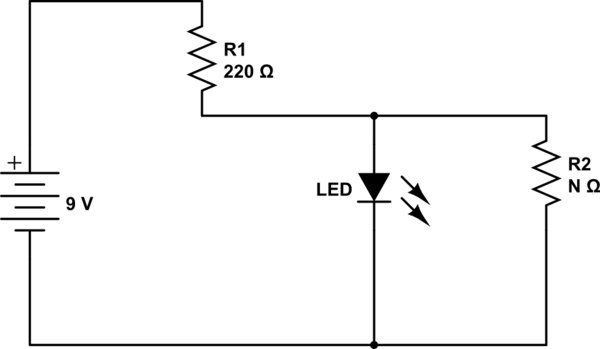 You can follow jonk's approach and you will end with a Thevenin voltage and a source resistance.

If you model the LED as an otherwise perfect diode with a 3V drop you will have two possible conditions:

The advantage of doing it "properly" is that you can use a graphical load line method, or a nonlinear equation solving method to find the LED current if you model it using the data sheet curves or the Shockley diode equation respectively.

On the other hand, if it's an exam question I think I'd opt for the cheap and dirty method. 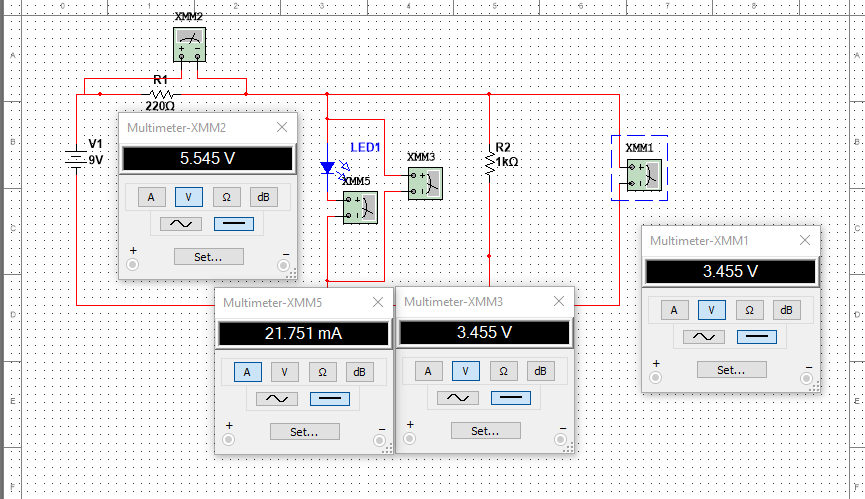 Not the answer you're looking for? Browse other questions tagged voltage led circuit-analysis resistors ohms-law or ask your own question.

3
Calculating LED current flow in a parallel circuit
0
With LED brightness and different resistors, do I talk about the current or the voltage?
1
led resistor calculation, and resistor wattage?
0
One resistor in series and two in parallel for LEDs
0
Confirmation on Diode in parallel with a Resistor
2
How to solve a LED-resistor parallel with a resistor?
0
Calculating the resistor needed for a simple LED and battery circuit
0
Want to understand the led series/parallel and parallel/Series combination circuit
1
Is it OK/Safe to use a parallel resistor to divide current driving an LED chip?