I'm building an attenuator using an Lpad. Do I need to connect '1' to GND? What difference will it make?

Here's my circuit (Fritzing didn't have mono-jack connectors or an Lpad, so I'm using the ones shown):

Don't want my circuit to cause any damage. Left out specifications of the source and output to not further complicate things. Just want to know if the '1' needs to be connected or not.

If you don't connect point "1" to ground, then instead of an “L-pad” you have a variable series resistor. This will still work to attenuate the signal, but:

In the following schematic, the upper circuit (1) is the ungrounded (series resistance) you propose. The lower circuit (2) is a complete L-pad. If you run the simulation with a “DC sweep” of the "K" parameter of each of the potentiometers you will see the difference.

Note: for applications like driving a speaker, which is a common meaning of "L-pad" in audio contexts, the the result won't be linear because of the loading effect on the voltage divider. The resistance values in this circuit are representative of a speaker system and show this effect. But it's still much more of a useful range than the other.

Note: For simplicity of analysis the circuit specifies a DC voltage source. But since the circuit is entirely made of wires and resistors other than the source, the results (the amount of attenuation and the amplitudes) are the same as if an AC signal were applied. 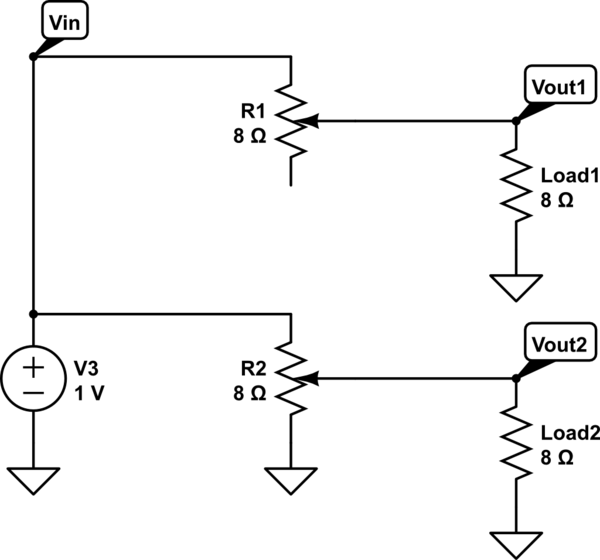 Not the answer you're looking for? Browse other questions tagged audio attenuator or ask your own question.