I saw arguably new and interesting lithium battery which is Lithium Titanate Battery(LTO). It has high discharge and charge current characteristic. Also, it has lower degradation graph when comparing with lithium ion battery. For further information :

I assume that I don’t need a BMS because there are no parallel cells, or am I missing something? What kind of protection do I need when I charge or discharge my battery pack?

I am looking forward to hear your technical suggestions.

Short: You very likely need a balancer.
This page quotes a user who says his SCIB LTO batteries work well without one. Other people sell LTO balancers and other brands are generally 'less reputable' than Toshiba's SCIB.

Longer: There is no reason to expect a string of more than a few LTO calls to not need a balancer. Balancing is required when small differences in cell characteristics, due to initial and/or lifetime characteristic differences, cause cells to age differently, to have different capacities and so to charge and or discharge in slightly different manners. The result is that some cells will reach either charge or discharge endpoints before others. Continuing to charge or discharge the series string in those conditions will drive the cells into disallowed conditions and may result in cell or whole battery pack destruction.

The "good news" is that LTO balancing should be no harder than for standard LiIon cells - except that, if charging is carried out at the fast charge rate then or at the maximum permissible charge and discharge rates the switches used will need higher current ratings for a given cell Ah capacity. It would be possible to voltage monitor all cells in a string and enter balancing mode at lower charge rates when any one cell reaches its permissible limit.

LTO differences compared to LiIon include:

Toshiba continue to announce 'improvements' to their SCIB cells. If Toshiba are still learning, other manufacturers and/or their users also are.

In the Suzuki EVs the LTO battery is usually used as a "front end" to the main LiIon battery, allowing fast charge and discharge for energy regeneration and hard acceleration purposes. LTO chemistry has lower energy density than standard LiIon technology making it unattractive in mobile applications where its significant improvements over LiIon are not highly valued.

A "Sort of datasheet" for Yinlong 40 Ah LTO cells 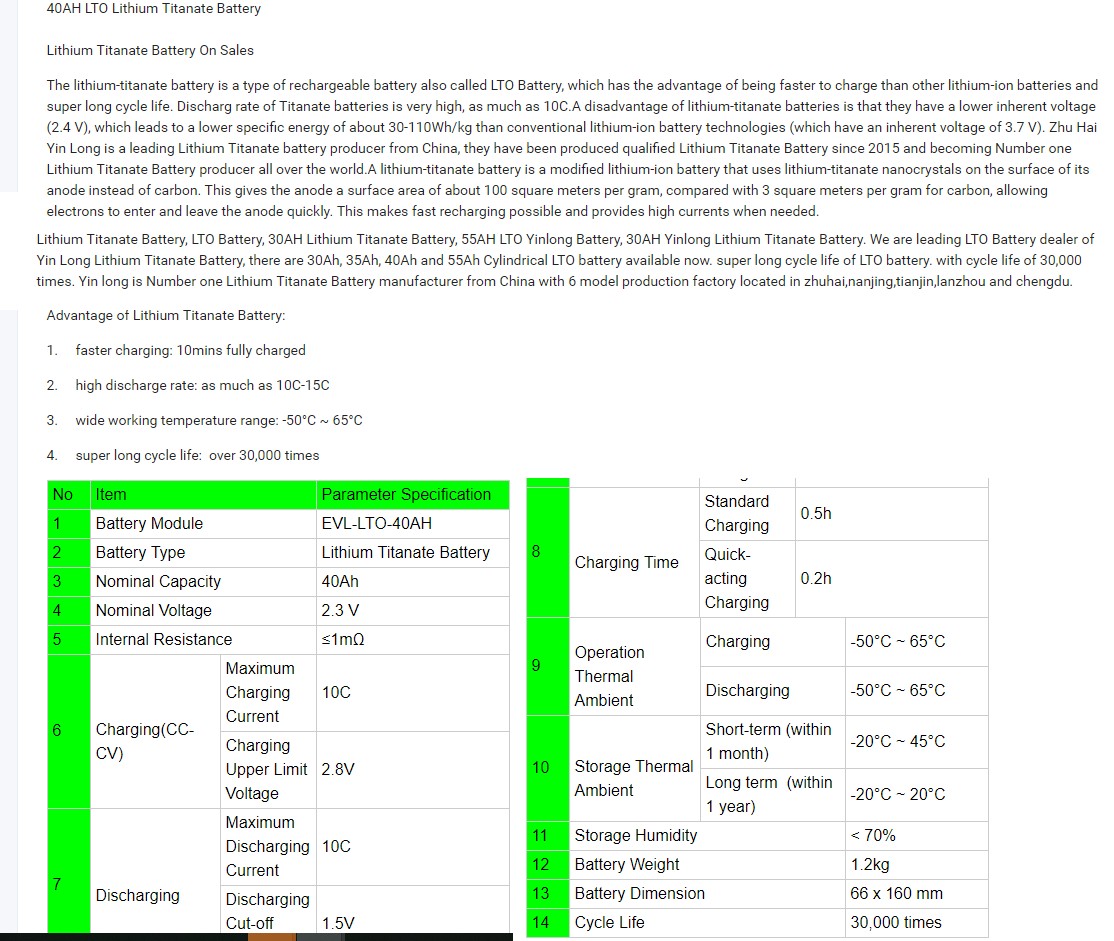 Demand for SCiB™ is growing fast, and Toshiba is expanding production capacity through capital investment and alliances. In Japan, the company will construct a new production facility in Yokohama, Kanagawa prefecture, and reinforce the current manufacturing facility, Kashiwazaki Operations in Niigata prefecture. Separately, in 2017, Toshiba, Suzuki Motor Corporation and Denso Corporation agreed to establish a joint venture company to produce automotive lithium-ion battery packs in India, and Toshiba will also collaborate with Johnson Controls Power Solutions in the U.S.

Not the answer you're looking for? Browse other questions tagged batteries lithium system or ask your own question.