I make big mistake in my design. I connect output to ESP8266 GPIO2 at this pin I got base of NPN transistor to control LED. 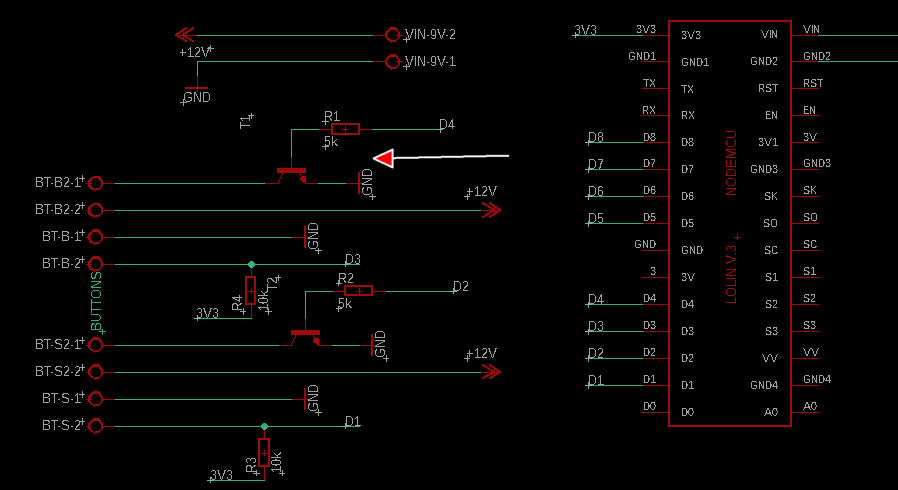 I test it on breadboard but probably by noise or "universe magic floating voltage" there was no problem with boot. I make PCBs but of course now ESP wont boot because it need to be HIGH on GPIO2 to boot from flash. So I need add pullup to D4 (it is no problem) but how I can invert logic of NPN or replace it with something different without manufacture whole new PCB ? Thanks guys.

An N-channel MOSFET would let you have a pull-up that lets it boot, since the gate does not draw current after the original capacitive charge. The LED would be on a boot but that may not be an issue.

Or you probably don't need the transistor, you could perch a small resistor on two of the transistor pads and use the GPIO to drive the cathode low. You may need to increase the series resistance to keep the LED current in spec for the IC.

You can replace the transistor, if a typical SMT SOT-23 type such as MMBT3904, directly with a MOSFET such as an AO3400A, the pinouts are compatible and the internal pullup in the ESP8266 module should suffice for boot-up. You can leave the 5K in place, or take it out.

The LED will remain on until you actively drive GPIO2 low.

Not the answer you're looking for? Browse other questions tagged transistors digital-logic inverter esp8266 npn or ask your own question.

0
LED driven by MOSFET is dim

1
ESP8266 driving relay and reading button
2
Pull up on NPN transistor (during microcontroller power up)
2
Problem with the fall time of a NPN transistor
3
Linear regulator doesn't keep the right voltage when connected to ESP8266
0
PWM-controlled RGB LED is flickering when PNP transistor should be off. Any insights why?
1
NPN SMT Transistor with flipped Emitter and Collector
3
ESP8266 loses wifi connection on switching a load
2
Improving edge detector with latching circuit for esp8266
0
ESP8266-01 pull GPIO2 down only after boot
1
NPN transistor replacement verification