Why should a UPS fail if the battery fails but the power from the wall outlet is still good?

Why wouldn't this work? No switching transient and the power supply to the servers (or whatever) fails only if both battery and AC power fail.

Over the weekend, some server in the server room died because of a UPS battery failure while the AC power remained fine.

I don't see the reason for why this failure is inherent to the problem.

Revision: It finally occurred to me to look it up in Wikipedia, and they say there are 3 different designs, and the seamless switching design I might have been looking for is the Online/double-conversion design. All other designs have a hard switch from the AC mains to the output of the inverter.

So it just occurred to me, similar to how the power-generator with the power company is put online to the grid by carefully aligning the phase of the generator to the phase of the AC on the grid and then throwing the switch, can't they make an energy-efficient UPS that has the UPS output connected directly to the AC mains in parallel to the inverter where the amplitude and phase/frequency of the inverter output is adjusted with a control system very similar to a phase-lock loop so that the power contribution to the output from the inverter is zero or very small during normal operation. It's an AC source that is phase-locked to the mains with amplitude adjusted from fiddling with the switching transistors on the primary of the inverter output transformer. The amplitude is increased so that the net AC current is never delivering power to the inverter's output transformer but there is only a trickle of current coming out, under normal operating conditions.

Then, when the AC power main goes out, the inverter is taking over the load and the battery is supplying a lot more current to the switching transistors on the primary of the transformer. There would have to be a disconnect of the output from the mains, because when the power comes back at any random moment, we don't know that the inverter phase is in phase with the mains. Then the controller of the inverter would slowly adjust the phase of the output of the inverter to be in phase with now-energized mains, the output voltage would be adjusted to be the same as the mains, then the disconnect switch would be reconnected and the system would go back to "normal operation".

Does that make any sense?

Tim, what do you think of that?

I agree with Tim, but still Maintenance on replacing the battery could have avoided the failure.

To ensure the battery is good, it must be tested somehow or replaced if near 4 to 6 yr life span.

One may need to remove the battery or test it in-situ while UPS has bypassed the AC to load and battery and inverter are not in use. 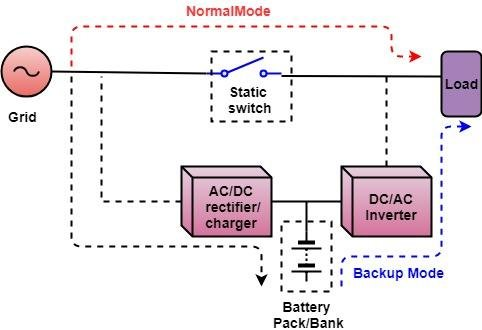 THat's a lower cost hot switch UPS which takes 6 to 8 hrs to recharge the battery.

This means it does not have the power to even drive the inverter, unlike all laptop chargers which can operate without the battery. But those are only 65W. In this cost-sensitive commodity adding power to drive the inverter is a lot more than just a 12V trickle charger.

Ideally, batteries are AGM also need to be pulse charged to reduce the possibility of sulfation, even if they say "sulphate-free".

Read here to see the doubler conversion or multi-mode UPS which cost a lot more. These operate from the inverter in continuous mode. - So there is no fast switching of input AC to AC inverter output on AC input failure to the inverter output

Not the answer you're looking for? Browse other questions tagged ups or ask your own question.

0
Protecting a wireless router from voltage fluctuation
1
Is it possible to connect a UPS in parallel with the mains?
1
Grid changeover switching
0
Using 3PDT Relay To Switch Grid and Inverter Output
0
Is the output from a 120V 300W UPS enough to kill a person?
1
UPS Circuit - Unexpected Inverter Death
0
Can grid-tie inverters charge UPS batteries if connected to the UPS output?
1
Two 5V Raspberry Pi UPS Idea
1
Does return path need a diode?