Oscilloscope shows small spikes on input (100mV), but large spikes on output (3V). The spikes are from switching (400 kHz).

I mesure with probe with wire coiled around it.

The switcher is powered by separate 12V power, it has 10uF and 1uF caps right next to Vin pin. Every IC has caps near them. Output caps are close to LED wires.

As I understand it, the spike (ringing) happens when MOSFET starts conducting, then when it opens, second, smaller one happens.

Can the spikes be reduced somehow? Also, is it bad, will it harm anything? 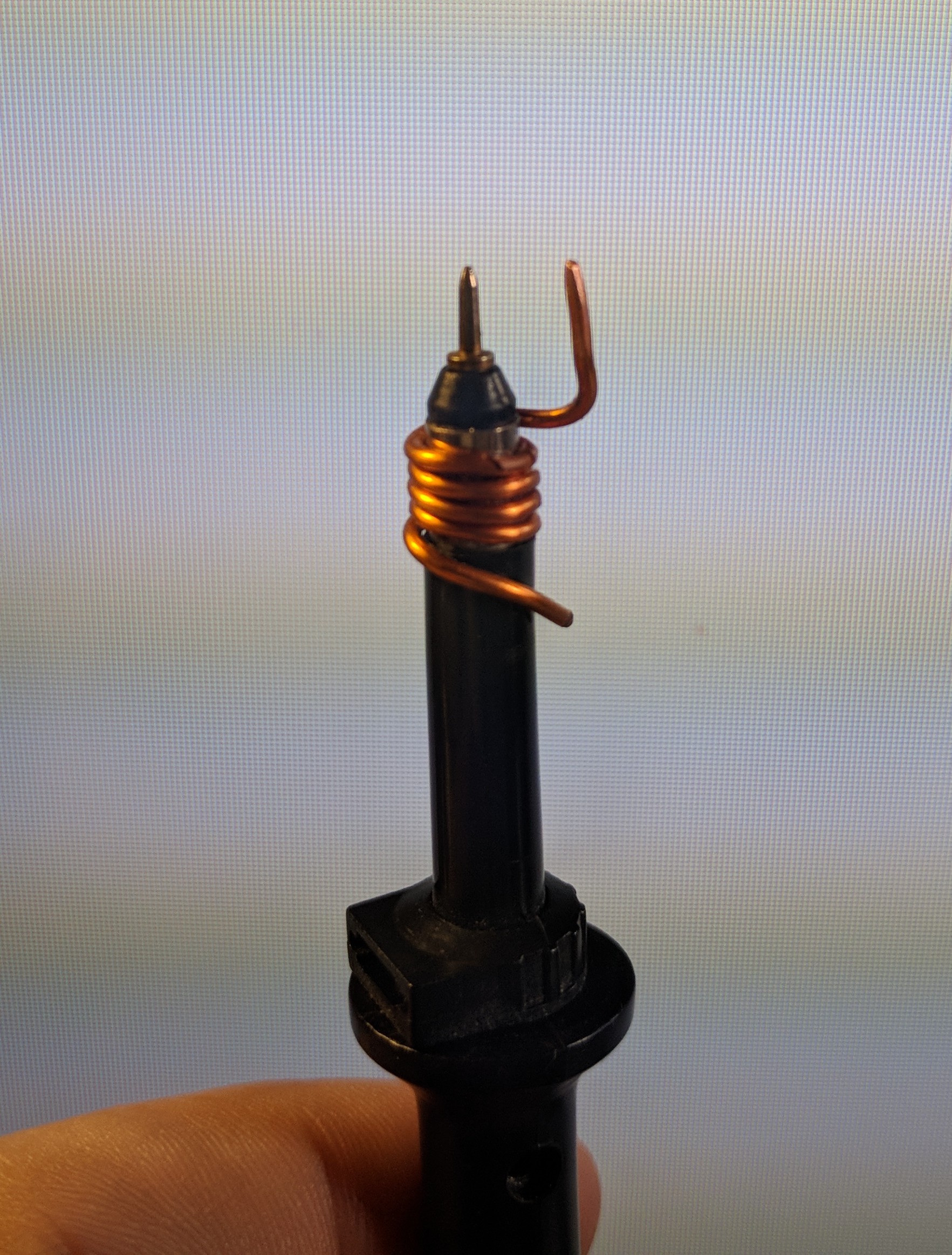 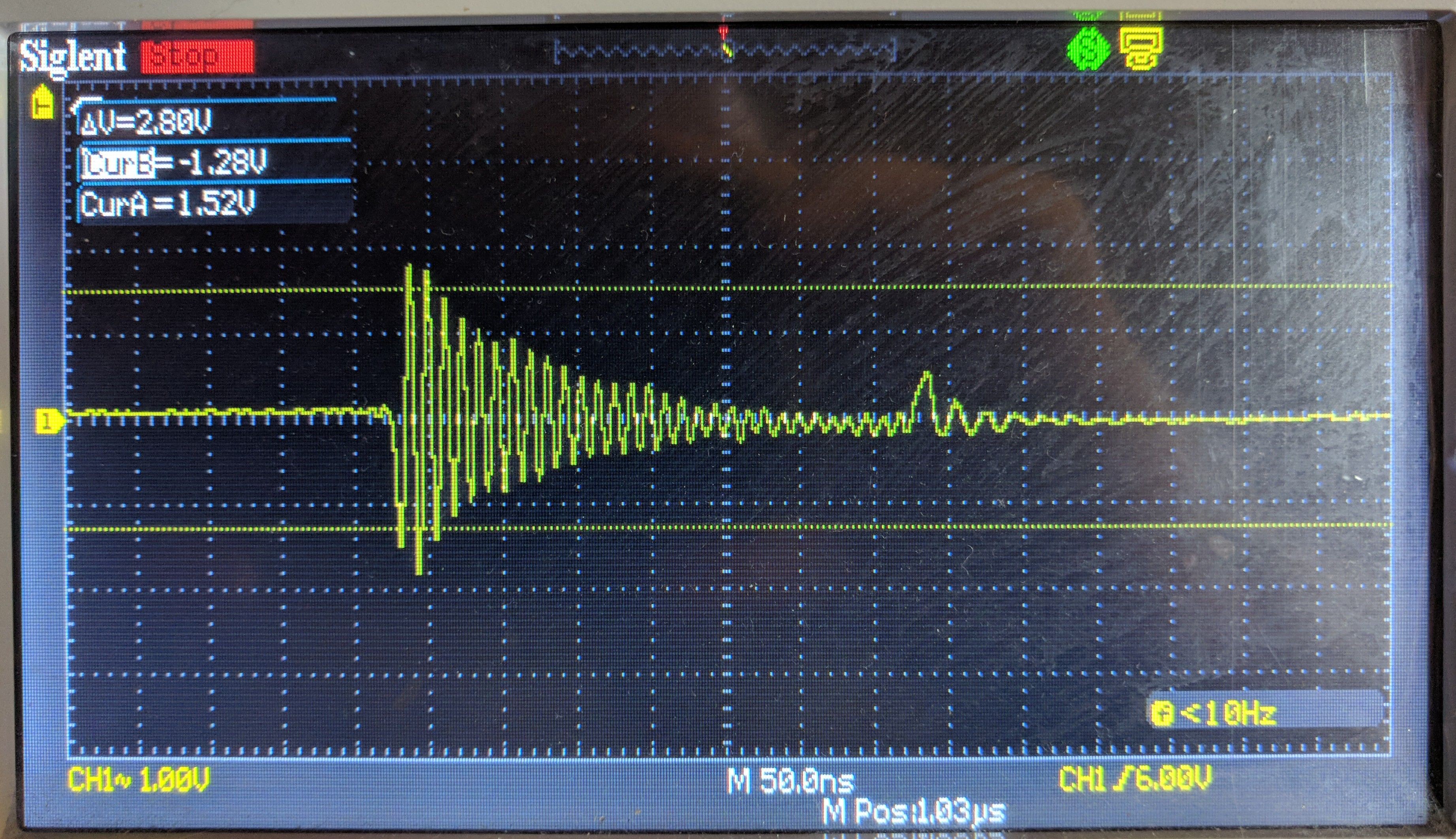 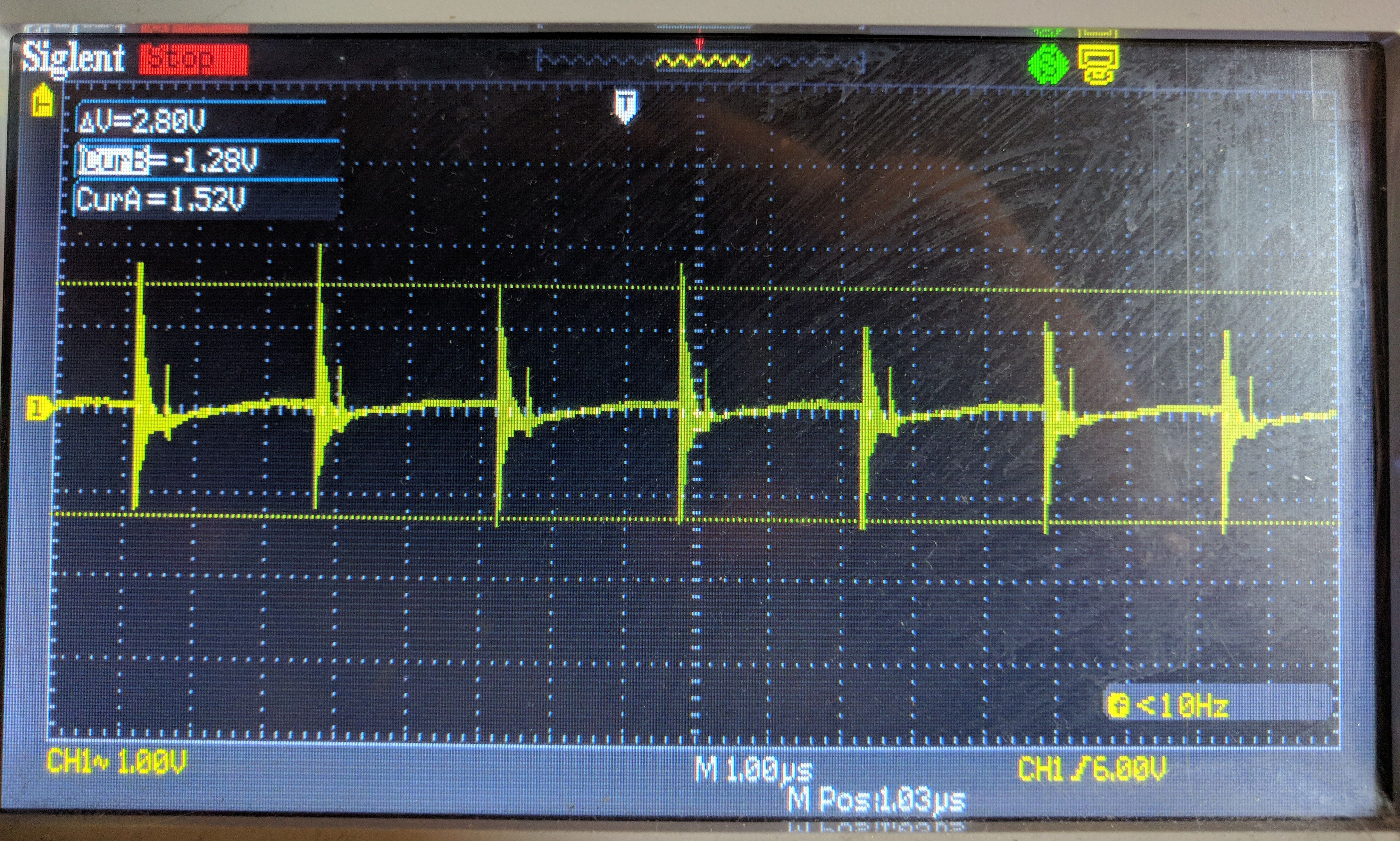 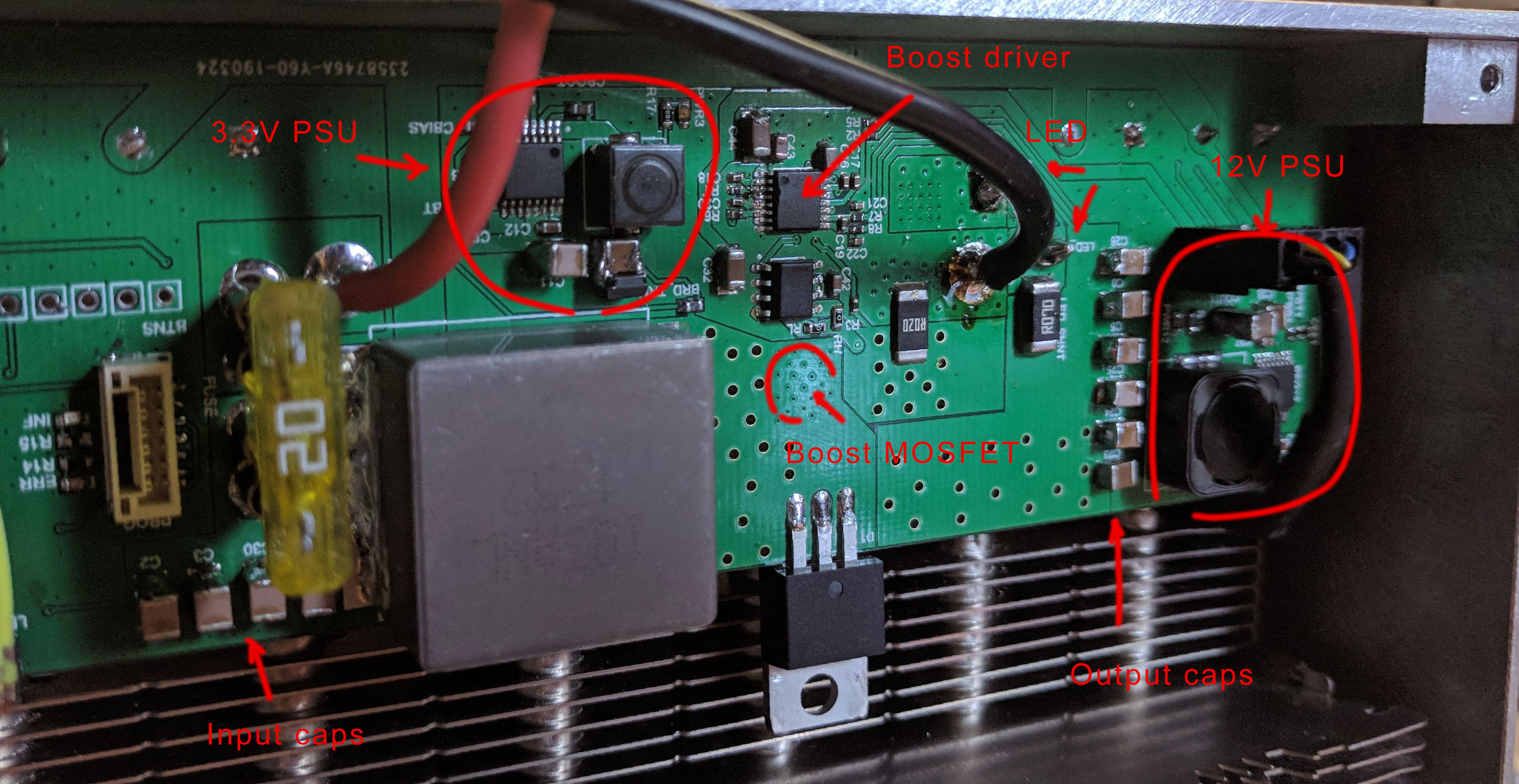 Your spike is common on hard switched power supplies .It is probably the mosfet ,PCB,coil ,diode capacitance resonating with parasitic inductance in the PCB and in the semiconducter bonding wires .Try gate resistance ,Try better PCB layout,Try DS RC snubber .If you do not improve things you will fail radiated EMC .

The large current spikes are due to operating in the discontinuous conduction mode (DCM) which is inherently noisy at high currents.

Suggestion: Change the design to operate in continuous conduction mode, CCM will reduce the dI/dt significantly from a fast switch transient< 4ns to dI/dt=V/L for the flyback choke slew rate.

Thus if the current slew rate can be reduced such that the bandwidth BW is less than the spurious resonance BW< 0.35/Tr for risetime Tr, there a good chance of noise reduction.

I would guess is an LC tank circuit on the board layout from switched ground path length and Coss FET output capacitance, but non-contact shorted tip probe methods can sniff the current loop to identify the DCM components ( which is also stated in the datasheet).

The 125MHz ringing appears to be the self-resonant (somewhere) that may be located by shorting the 10:1 probe tip to ring and sniffing near-field current transients as a loop antenna.

YES. If this ever becomes a commercial product, it must be certified against unintended radiation to be CE compliant. Radiating near 120 MHz may interfere with Airport Receivers for example. 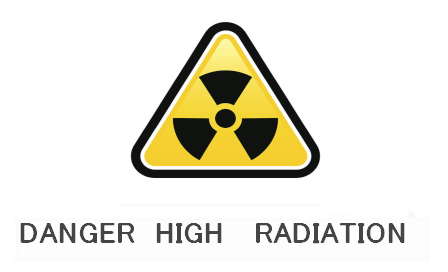 There were many suggestions here, many of which I will implement in the next version of my board.

In this case, during redesign process, I noticed that the resistor on the current sense RC LPF was shorted, so, there was no LP filtering. I am not sure exactly how it was affecting the circuit, but now it looks much cleaner. The same waveform, but without spikes, just the ripple.

Here is the waveform, probed exactly as in the post above, on output capacitor: 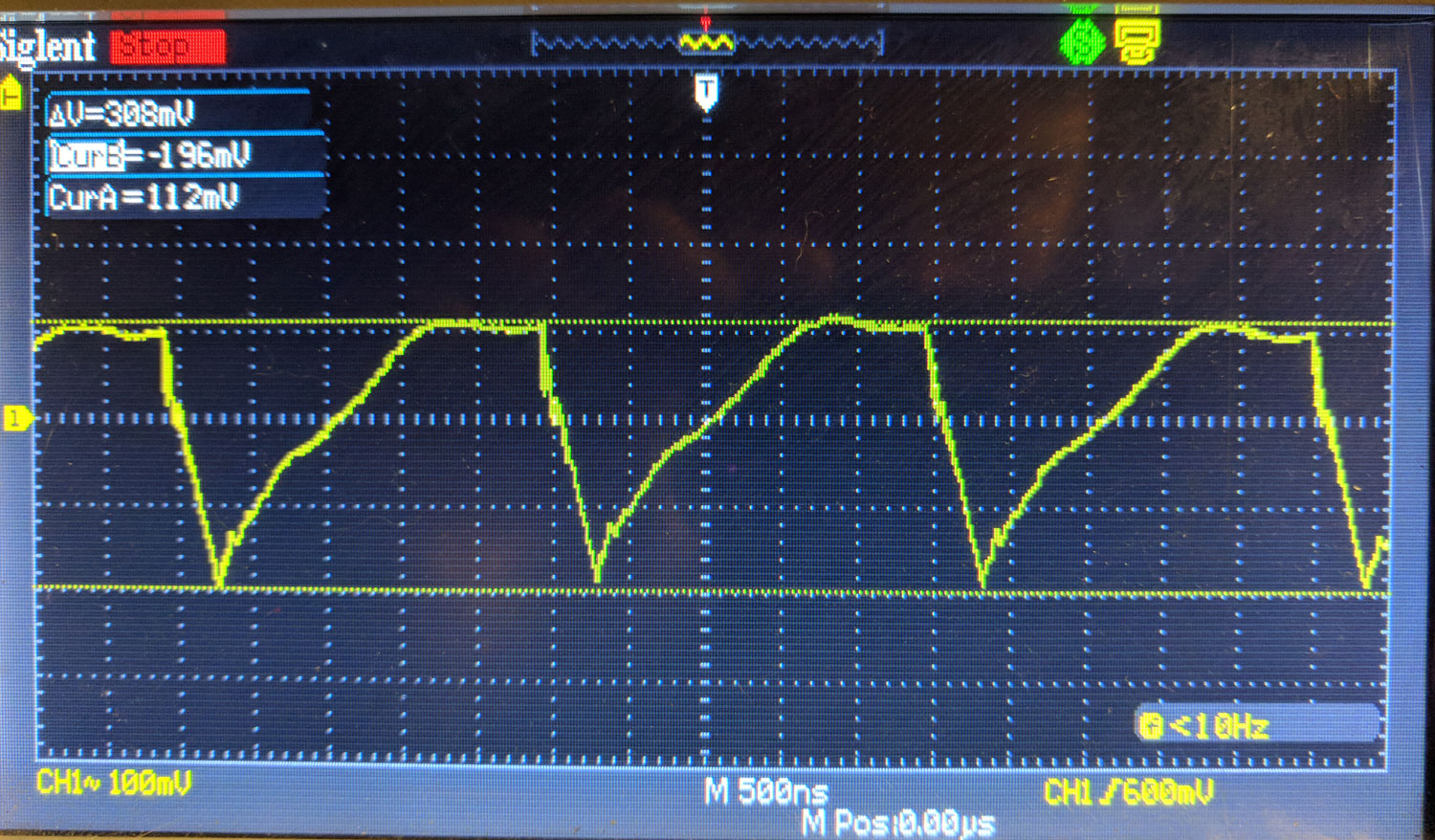 Not the answer you're looking for? Browse other questions tagged boost led-driver ripple-current spike or ask your own question.