Power multiple parts of one project from one wall wart

I'm building a project with a high-power 10W RGB LED controlled by PWM from a microcontroller. Right now I'm using a wall wart to power the LED, and powering the MCU through my computer's USB.

My question is: what are the best practices for powering the MCU and LED from just one wall wart that plugs into the final enclosure? I don't want the final box to have two power lines going into it since that strikes me as ugly and I want to eventually show off the final product.

I want just one wall wart that splits its power inside the box to provide anywhere from 6 to 12V (ESP32 regulator accepts 6-12V) with at most 400 mA to my MCU, and another line or lines going to the RGB LED to power the Green+Blue channels at 3.5V and ~500mA and the Red at 2.5V and ~700mA. Something like a 9V, 1.5A wall wart would provide plenty of power for the whole thing.

I'm asking this now because I'd like to understand what sort of Buck converter/switching/linear power supply I would need to design/buy right now that will integrate with the single power source.

Strangely, I can't find any example on Google of finishing a project like this, so if anyone knows of a resource with an example or education on this, I'd appreciate a link.

EDIT: I was thinking of an LED like this one. Except RGB, and not RGGB. I'm open to LED suggestions.

Based on this article on wall warts it seems risky to use them because they're often unregulated.

After looking around some, I found this board mountable AC-DC converter at the right power and with the right over voltage/over current/short circuit protections. This seems like a good solution for a safe final product and I could plug the mains directly into the enclosure and into this power supply.

Treat the shared wall-wart as dumb, bulk power, and regulate everything separately from that. (everything that needs to be regulated, anyway) 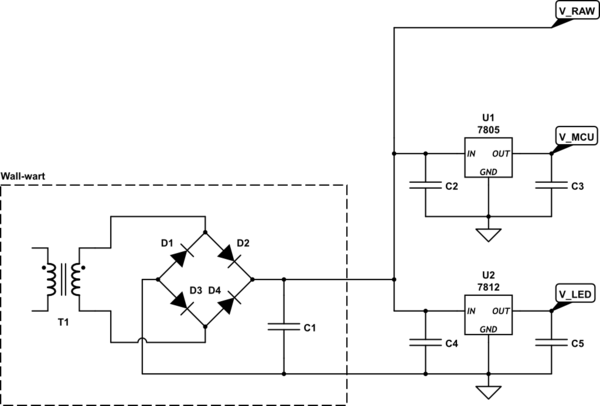 The regulators will stop a lot of the crosstalk between the isolated power "groups". Everything on the same "group" will "hear" each other pretty well, but have a harder time "hearing" things from the other "groups".

Of course, you still need to bypass each chip individually with a small capacitor, in addition to the bulk capacitance before and after each regulator.

It seems to me that you want to run the LED's directly from the MCU output pins, but I don't know of any that can provide that much power directly. So you'll need an amplifier of some kind. The simplest way to do it is probably with a single transistor per channel, like this: 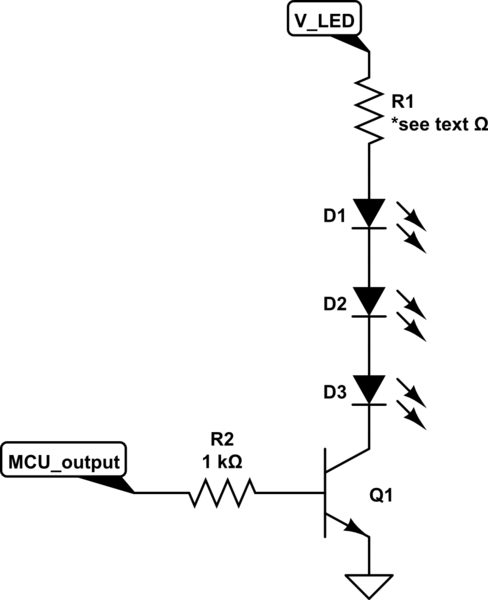 Putting the LEDs in series like this adds voltage instead of current, which is much lower stress on both the transistor and the power supply, and it allows a single resistor to set the current for the entire array.
R1 = (V_LED - Vf*N) / If:

Don't forget R2! (or you'll blow up the transistor or the MCU or both) You can buy "pre-biased" transistors that include Q1 and R2 in the same package, but one way or another, it must be there.

If you only have a single diode per channel, and it really does take almost 1A at 3V, then I'd be tempted to use a variation of the circuit above, but fed from a 3V or so pre-fab switching regulator. There's a tradeoff here, between R1 having very sensitive control over the operating current because of too-low voltage (also consider some natural variation in the supply voltage), and excessive power dissipation in R1 itself because of too-high voltage with unchanged operating current.

(this is one of several reasons why high-voltage, low-current arrangements are preferred if possible)

Not the answer you're looking for? Browse other questions tagged power-supply led led-driver rgb high-power or ask your own question.