Using transistor as switch in the "middle" of the circuit

I have an rather complex circuit with button micro-switch in the middle (actually, it's RF remote control with 3 buttons).

I would like to be able to simulate the micro-switch click on it with one of the pins from my micro-controller.

To do so, I decided to install transistor in parallel manner. The problem is, micro-switch is neither the last nor the first element in circuit. And as I recall transistor needs to be connected to ground (NPN) and not just "somewhere in the middle".

My non-modified circuit with switch in the middle, between two LEDs (they are there just to make a concept of some "black box" before and after the micro-switch): 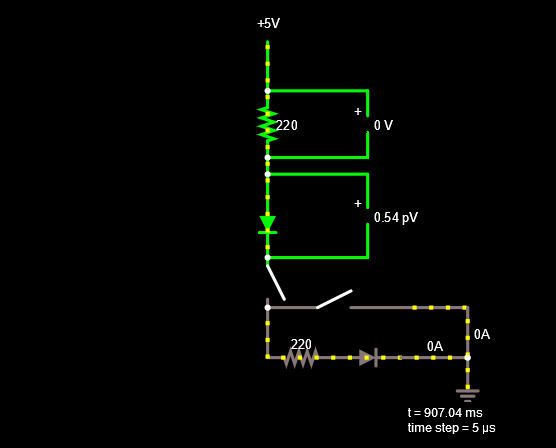 When I add an NPN transistor and tries to simulate the switch with it, the current is different: 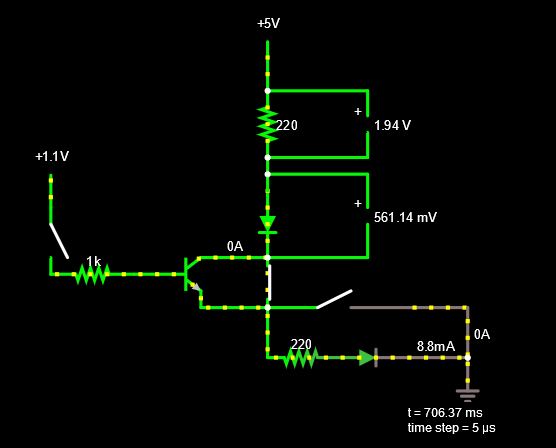 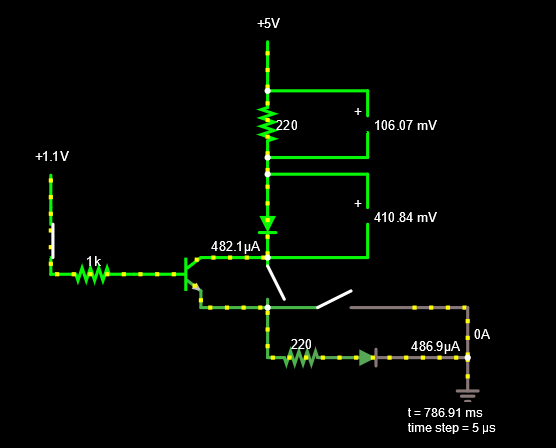 If remove the part of the circuit that is "behind" switch (to GND), it works as switch simulator just fine: 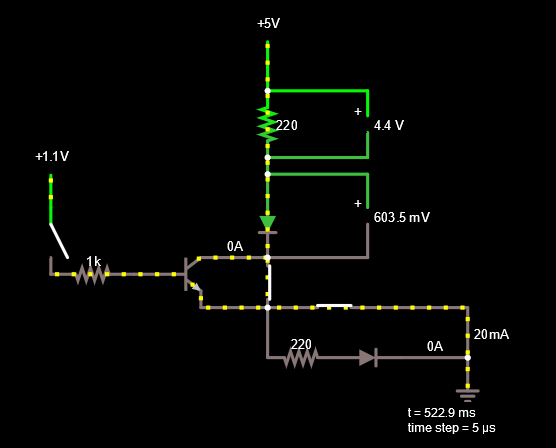 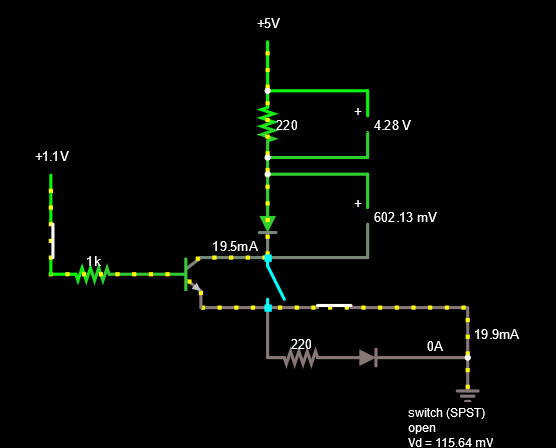 What should I do in such case, when the circuit is already built, and I want to simulate switch "click" without moving the switch from it's place?

It's ok to use an NPN in the 'middle' of the circuit. If you were to use mosfets, there could be problems with Vgs if used in the 'middle', the gate needs to be higher than the source or the mosfet will not turn on.

An NPN transistor will function like a mechanical switch, but will have a voltage drop across it similar to a diode. The NPN transistor most likely needs more current, with the 1k current limiter resistor, it would be wise to either lower the resistance or increase the voltage from 1.1V to 5V so the transistor can be fully on.

Use a 50mA PNP with proper bias or consider a LOW side NPN switch on Cathode of LED. with 5mA base current. at 1.1V in order to drive 50mA or so. (below) 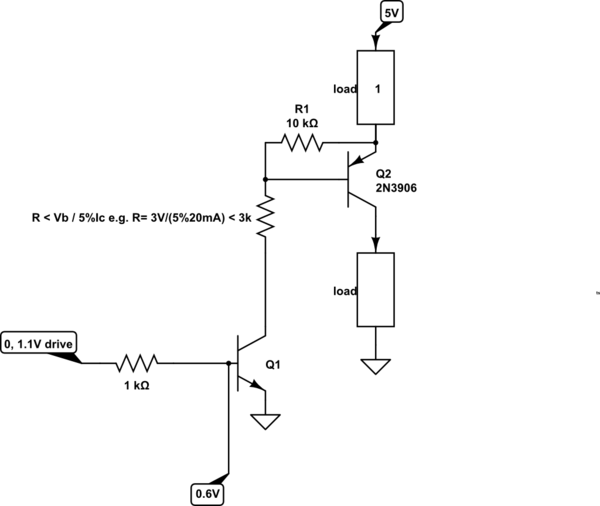 This is a level shifting NPN-PNP pair switch assuming a CMOS 1.1V driver

Here I assumed that the base voltage was 3V and when closed the collector current is 20mA , but if lower than 3V then a small base resistor is used so that Ic/Ib=20 to 10 for each Q1, Q2 when Vce=Vce(sat)

Not the answer you're looking for? Browse other questions tagged transistors switches circuit-design npn or ask your own question.

3
Connecting a N.O. grounded switch to a scanning switch matrix
1
24V proximitiy switch, NPN transistor, Arduino interrupt input
1
Basic transistor switch
3
PNP to NPN Transistor switch
9
Why is the load in an NPN transistor switch located in the collector circuit?
1
How to fade or delay a DC Signal to remove speaker "thump"/"click"/"pop" from transistor switch?
1
Fail on using 2 Transistor as a Switch
0
Can I use an NPN BJT transisor as a standard switch?
0
use NPN as a switch between nets that don't have a voltage difference