I am designing a product which uses the LTC3122 as a 5V-12V boost converter (datasheet here). This particular device provides the ability to add gain compensation, phase lead, or both. In my case I am only using the gain compensation network, as seen in the image below:

R13 and C28 form the phase lead network (marked as "DNP" in my case since they are not populated), and R12 and C26 form the gain compensation network.

I calculated these values based on the requirements for my project, and now I would like to illustrate the effect that adding the compensation has on the output of the system. I want to do this by generating two Bode plots - one for the circuit with R12 and C26 included and one without. However, I seem to be having some difficulty generating these Bode plots. I attempted to perform an AC simulation of the design in LTSpice but received a warning saying that "This simulation calls a time-domain model...", effectively saying that the simulation would be pointless. I then tried following the process described in this link to obtain a Bode plot, but the simulation has been running for hours and still has not completed. The status bar at the bottom of the LTSpice window says it is 0.3% complete after running for almost four hours. I don't expect it will be able to find a solution. Below is an image of the LTSpice schematic pane:

What other methods could I use to obtain the Bode plot(s) for this boost converter? I went through the datasheet and, while it contains a large number of equations and formulas for poles and zeros, I'm still not convinced I have enough information to determine the full closed-loop transfer function of the model. I would greatly appreciate some assistance from someone more experienced with LTSpice and/or obtaining Bode plots of boost converters than I am. I am basically looking for a Bode plot like the one shown on Page 17 of the datasheet (below), but I want to be able to generate my own so that I can show a side-by-side illustrating the differences between the responses of the compensated vs. uncompensated systems. 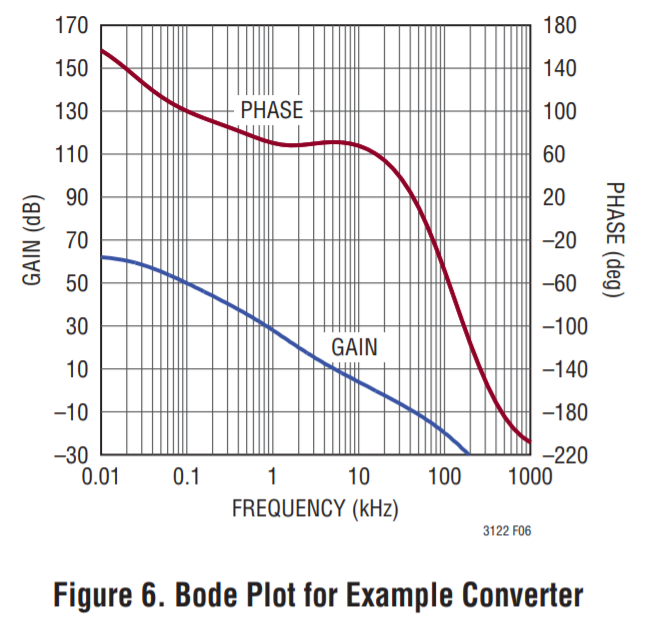 You probably already know this but I'll provide it for users who may not know about it. LT power cad can be useful for checking compensation and it generates bode plots and most all of the linear DC to DC converters are available for checking. It also does a handy power calculation for most converters. 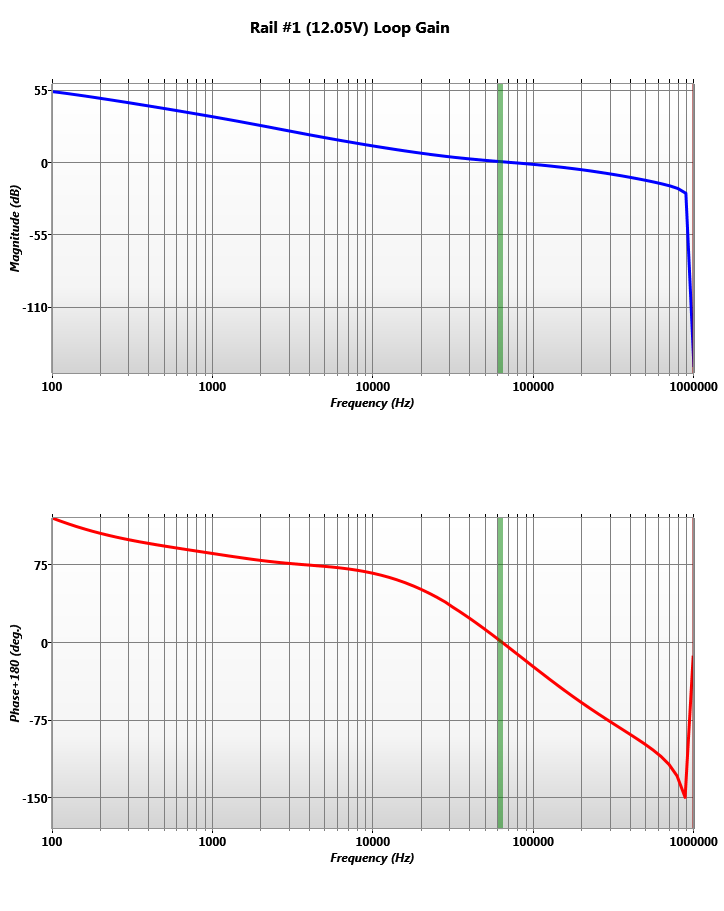 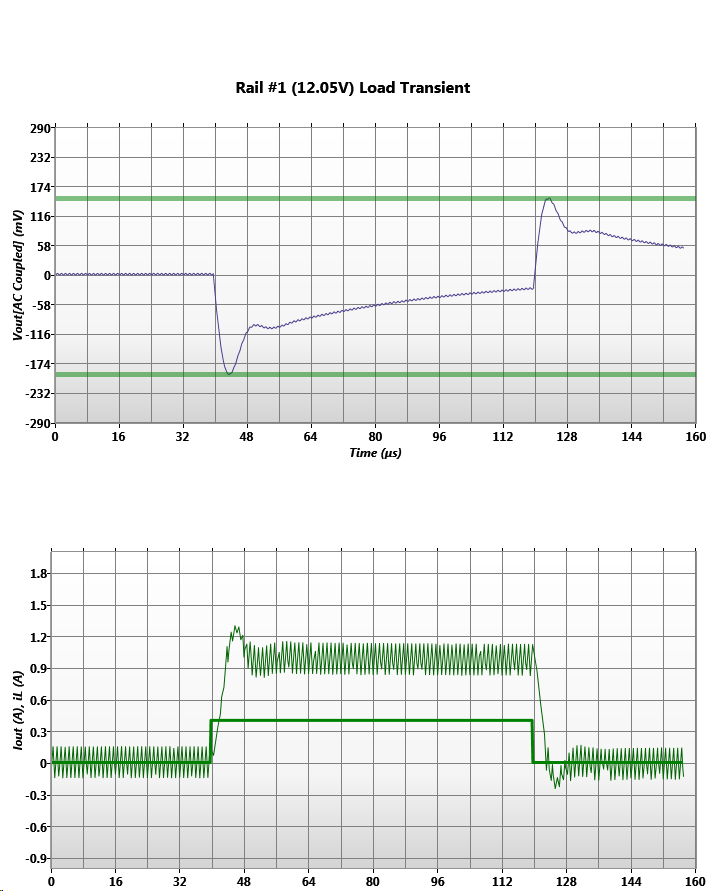 You're running into the typical problem of trying to get a frequency response from a transient model. The switching time is much shorter than the loop bandwidth meaning you need to run a huge number of switching cycles at small simulation time steps to get meaningful results.

Here are your options:

I find all of Falstad's Physics Tools best for solving simple questions. Choosing the right model for each non-ideal part is what I do. This is especially useful when models for parts are not available, so you emulate the datasheet response then do "what if" mods for ESR or stray coupling.

There are 3 main sub-sites for; 1)Fourier waves, 2) Bode Plots and filters, interactive time 3) scope analysis. Going between (2) and (3) is possible by exporting data & importing on other site for some things.

It takes some imagination and learning the keyboard commands ( like "r" to draw a resistor, "c" a cap., but worth it.

Then any part can be added, edited or even add an ideal switch at 1GHz to compare stripline filters A vs B.

The cursor shows the reading of amplitude and phase ( options) 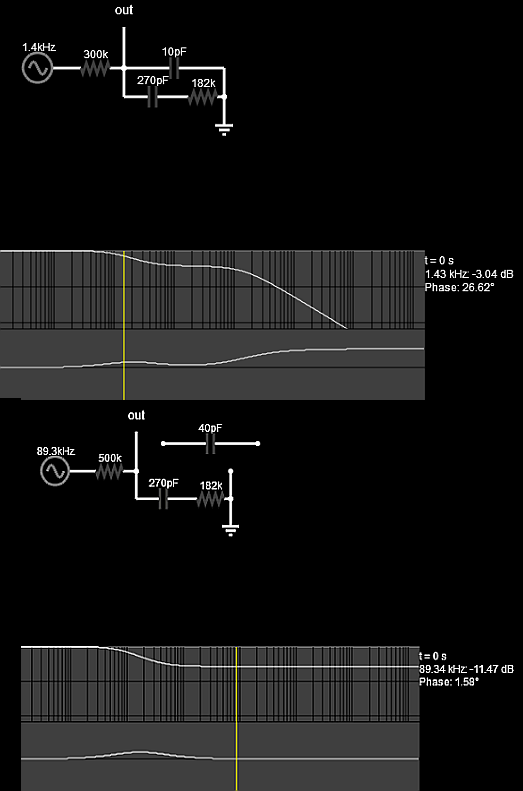 Here more phase lead is added after 30kHz where it does not in the lower version.

Not the answer you're looking for? Browse other questions tagged simulation ltspice boost bode-plot or ask your own question.

6
Interpreting bode plot of type 3 compensation network for buck regulator
1
Unexpected plots for active low pass filter response in LTspice
0
Is my measurement setup correct for the common mode frequency response?
0
How to estimate the transfer function given only Bode plot data points?
0
KHN biquad: why does LTSPICE plot a wrong phase plot for bandpass filter?
1
What is the bode plot of an inverting op amp if you replace the resistors with caps?