Why have apparent memory bitflips in non-ECC memory not increased?

Back in the early 2000s I remember asking about why it was so important that servers use ECC memory. The prevailing wisdom at the time was that systems with lots of RAM would be, statistically, more likely to suffer bitflips. This makes sense - if each cell has a 10-20 probability of suffering a bitflip per second, then 109 cells have a 10-11 probability per second. The more cells you have, the higher the probability of a bitflip in any given time period.

Back then we would be looking at a ballpark of 128MB to 1GB of RAM. These days we regularly put 16GB or more in laptops and desktops, with workstations commonly having 64GB or more. For argument's sake, let's say we've increased total RAM amounts by two orders of magnitude. So we should see a hundred times or so more bitflips, on average, in any given system, assuming that nothing else changed.

The more I thought about it, though, the more I realised that the random bitflip rate should be much higher in newer systems:

But, as far as I know, we're not seeing bitflips everywhere on non-ECC RAM, at least within the confines of our atmosphere.

So, what's the deal? Why aren't we seeing endless bitflips everywhere, at least 100x if not 10000x more frequently than two decades ago? Is ECC actually important in the context of growing RAM sizes, or do the stats not back it up? Or is there some other technology advance that is mitigating bitflip problems in non-ECC memory? I'm particularly interested in answers with authoritative references rather than speculation about error rates.

Single-event upsets (SEU) at sea level tend to be caused either by radioactive contaminants in the IC manufacturing materials (particularly the metals) generating alpha particles or by high-energy neutrons (caused by cosmic rays in the atmosphere) ionizing atoms in the silicon itself.

Over the years, manufacturers have greatly reduced the threat caused by radioactive contaminants. There are also proprietary approaches to cell layout that can help to mitigate the risk of SEU. All of this is probably going to be trade secrets and not public information.

And, no, I'm not going to do your literature search for you. However, I recommend that you go through the IEEE Transactions on Nuclear Science if you want references.

The answer is, more work needs to be done, and they aren't sure:

The results show that the radiation susceptibility has actually improved somewhat for devices that have advanced to the 0.13μm level, which contradicts earlier predictions. This trend is encouraging, but it may not necessarily continue for devices that are scaled below 0.1 μm. It is important to note that the recent computer modeling calculations for SEE susceptibility of scaled devices predicts a large increase in collected charge that is directly in conflict with test results for heavy ions and neutron soft errors.
Source: The Effect of Device Scaling on Single-Event Effects in Advance CMOS Devices 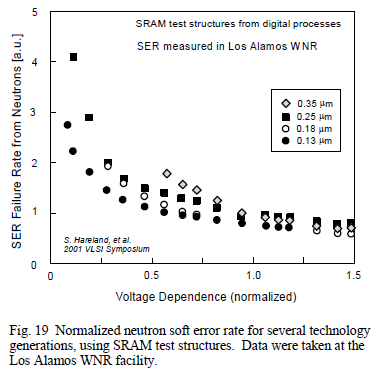 Source: The Effect of Device Scaling on Single-Event Effects in Advance CMOS Devices

The actual mechanism for SEE's/SEU's has more to do with voltage and geometry than size. The one would think that smaller size and smaller charge per memory element would make memory elements easier to flip and cause errors, but the effect is small and is more related to voltage and geometry. Which is good for space applications that rely increasingly on commercial technology (like cubesats).

Not the answer you're looking for? Browse other questions tagged memory ram error error-correction ecc or ask your own question.

9
Freezing DRAM for forensics (coldboot)
4
How does SDRAM refresh interact with ECC
25
Why does flash memory have a lifespan?
3
PIC32 does not have Memory Managment Unit, why would a high end microcontroller not have such a peripheral
8
Flash memory data retention time
0
Difference between a memory cell and a memory chip?
6
DDR3 Data Errors
3
ADC issue - possible non-monotonicity?
0
Why do we need interleaved memory?