How to sketch the Bode diagram of the output filter of a Buck converter?

I'm trying to figure out the Bode diagram of the output filter of a Buck converter:

Which looks quite familiar (and confirmed by this application note, page 10)

Now, how do I continue to sketch the Bode diagram? I know I should identify the poles, but with my values, the poles are in the i plane:

Can someone give me a hint?

Starting with your result and proceeding:

So this would suggest the following:

Equation (2) isn't in standardized form, yet. And there's a good reason to do some more work. Equation (2) has two different angular frequencies and it's not clear how they might interact. Perhaps there's another way to express it that will help clarify things. Some kind of "standard form" that will be more readily meaningful?

To zero in on the poles, the interesting areas surrounding the location where the denominator is zero, let's reformulate equation (2) above:

Note 1: There is something else called a damping value (or in Sallen and Key's writings it is called a dissipation factor), which has units. It is designated by the letter \$d\$ and not \$\zeta\$. So be cautious when reading. Earlier writing will often use the damping value or dissipation factor, \$d\$. This will be particularly true for earlier authors who are familiar with Sallen and Key's, "A Practical Method of Designing RC Active Filters", Technical Report No. 50 (now unclassified.) Newer books have evolved to use the above approach and therefore have now tended to standardize on using the unitless damping factor, \$\zeta\$, together with \$\omega_{_0}\$, instead.

I've hand-drawn a starting blue line to show the basic case without peaking. Just straight lines to the corner frequency (about \$5\:\text{kHz}\$.) The green bit is a hand-drawn bit of peaking to the computed peak value. The red line started out as three separate straight lines: one on the left to about \$500\:\text{Hz}\$ at \$0^\circ\$, another on the right going from about \$50\:\text{kHz}\$ and higher, and a third showing a rapid dive (almost but not quite vertical) going through \$-90^\circ\$ at \$5\:\text{kHz}\$. The rest was sketched in to connect those up. All such \$2^\text{nd}\$ order plots look the same. It's just positioning with values that makes one different from another. (The sharpness of the phase change is greater with higher peaking. Lower peaking will have a more gradual phase change. I'll leave the details for you to work out over time.)

None of this addresses your buck converter as a system. But it covers your output filter.

When it comes down to analyzing the transfer function of a buck converter operated in voltage-mode control, you have to include parasitics around the inductor and the capacitor: \$r_L\$ for the inductor and \$r_C\$ for the capacitor. The circuit can be further refined by adding the transistor \$r_{DS(on)}\$ and the diode dynamic resistance \$r_d\$ respectively weighted by \$D\$ and \$(1-D)\$ but it complicates the circuit a little more. Actually, to model the quality factor \$Q\$ adequately, one should also account for switching losses on the transistor and diode (\$t_{rr}\$) plus magnetic losses: all these losses participate in lowering the resonating peak as these elements dissipate energy in heat and damp the system. Nobody does that as it would be extraordinary complicated to derive and, in the end, you have to measure the circuit transfer function with a real prototype naturally accounting for all these contributors.

Regarding the determination of the upgraded \$LC\$ filter, look at the below figure which explains how the fast analytical circuits techniques or FACTs can help you determine it without writing a line of algebra. As documented in the book I wrote on FACTs, the transfer function must comply with the low-entropy format defined as follows: \$H(s)=H_0\frac{1+\frac{s}{\omega_z}}{1+\frac{s}{Q\omega_0}+(\frac{s}{\omega_0})^2}\$. In this format, the leading term \$H_0\$ must have the same unit as the transfer function you want to determine. For a voltage gain expressed in [V]/[V], it is unitless but would be \$\Omega\$ for an impedance, \$S\$ for an admittance etc. 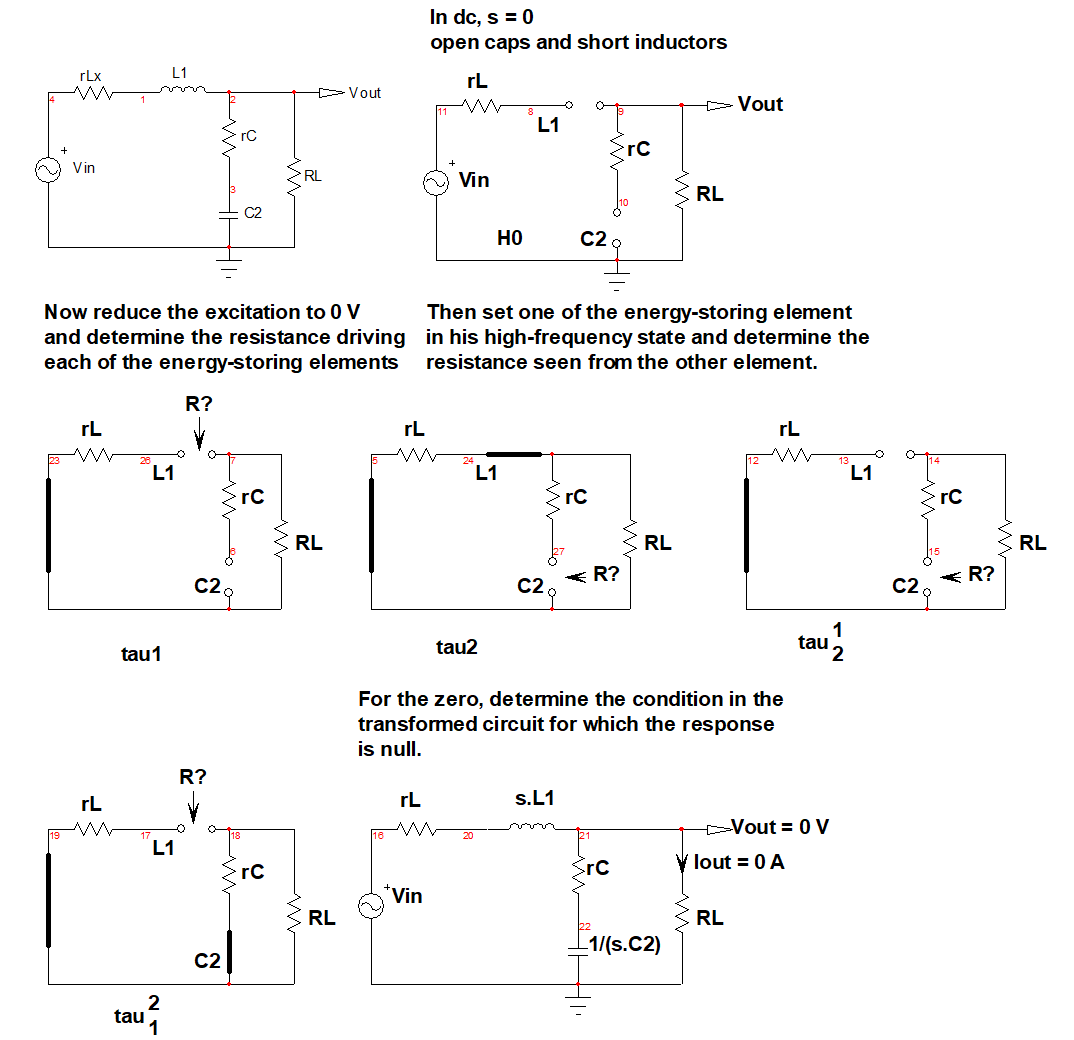 You start observing the circuit for \$s=0\$ where the capacitor is open and the inductor is replaced by a short circuit. The transfer function in this mode is \$H_0\$ and involves a simple resistive divider (in which you see that \$r_L\$ plays a role). Then, reduce the excitation to 0 V (replace the source by a short circuit) and "look" at the resistance offered by each energy-storing elements terminals when temporarily removed from the circuit. This gives you the low-frequency time constants. Then, set one of the time constant in its high-frequency state (a short circuit for a cap. or an open circuit for an inductor) and determine the resistance "seen" through the connections of the remaining element. This is it, if you assemble the time constants as shown in the below Mathcad file, you have the denominator.

Regarding the zero, it is contributed by the combination \$r_C\$ and \$C_2\$. They form an impedance \$Z=r_C+\frac{1}{sC_2}\$. When this impedance equals 0 \$\Omega\$ for \$s=s_z\$ then this is your zero. In this mode, the stimulus does not give rise to a response and is lost somewhere in the circuit: \$r_C\$ and \$C_2\$ from a transformed short circuit when \$s=s_z\$. And you see why the presence of \$r_C\$ is important as it produces a zero which softens the frequency response and provides phase boost at crossover. You can now plot the frequency response and explore a point where to crossover:

With a 5-kHz resonant frequency, you need to close the loop so that enough gain exists at the resonance and damps the \$LC\$ filter. A crossover of 15 kHz would be adequate as a start for this converter. As you can see, the FACTs can determine the transfer function in a swift and efficient manner without writing a single line of algebra. Furthermore, they lead to a low-entropy expression naturally highlighting the presence of poles, zeroes and gain if any.

Not the answer you're looking for? Browse other questions tagged buck transfer-function passive-networks bode-plot or ask your own question.