I am a total novice when it comes to electronics. I had a simple circuits class 30 years ago as a software undergrad. I've designed a simple LED lighting circuit for N-scale model railroad, to be used to light passenger cars. The circuit includes "anti-flicker" capacitors so that minor interruptions of input voltage due to dirty track, etc. do not cause the lights to flicker (which is terribly annoying).

I used example circuits from various websites plus input from forum members on an N-scale forum I am on to come up with this circuit. I've mocked it up on a breadboard and it works, but I wanted to make sure it makes sense to people who know more than me. The exact values in the circuit are just an example and I am not sure the resistor leading into the zener makes sense. I've watched a few zener diode YouTube videos and looked at online tutorials.

The goal of the circuit is to have a board made that the user can then populate with their desired components (amount of anti-flicker capacitance, "dimming resistor", number of LEDs in parallel, size of LED, 3.3V or 5V regulator feeding the LEDs etc).

The input is meant to be either DCC track voltage (n-scale levels) which is a digital square wave signal (and represented by the "VAC" inputs and on the output of the rectifier shows as around 13.5--14.5V), or for those using DC analog trains, a positive or negative voltage (usually 0-12V but can be higher than 12V).

So the input is fed through a bridge rectifier, and the output is then fed into the circuit. The main circuit is composed of anti-flicker capacitors that feed a voltage regulator (listed as L7805 but I am using AMS1117 in 5V or 3.3V versions). The output of the voltage regulator is fed into the LED circuit, which has a "dimming" resistor (shown here as 2.2k ohms, and which can probably vary from 750 ohms to around 3k ohms depending on how bright the user wants the LEDs to be, what sort of LED (0805 or 1206 -- the difference being the amount of light they produce so relative brightness of an individual LED to get the desired overall passenger car internal brightness), whether 5v or 3,3v from the regulator, etc.

(There is also a resistor of 100 ohms or 75 ohms to limit a hard surge of current into the capacitors [as I gathered from other circuits, and a similar low value resistor into the voltage regulator).

It appears from my testing that this is about correct but I am not sure I am computing the resistor leading into the zener correctly.

I had computed around 35 ohms based on a 13.5V input and a 12V zener voltage. But this gives me around 12.5-12.7V. If I make this resistor 150 ohms the voltage showing between the zener and the capacitor circuit is about 12V.

Because the LEDs are not lit very brightly, the overall load from the LEDs is not that high. If I am measuring it correctly, usually in the low single digit "ma" .

Does this circuit look reasonable and how do I really compute the resistor for the zener? I need to be able to handle a variety of input voltages from 12V up to probably around 15V/16V from the rectifier.

Thanks for a newbie.

There are more efficient ways to do this. or there are simpler ways to get a long time constant. 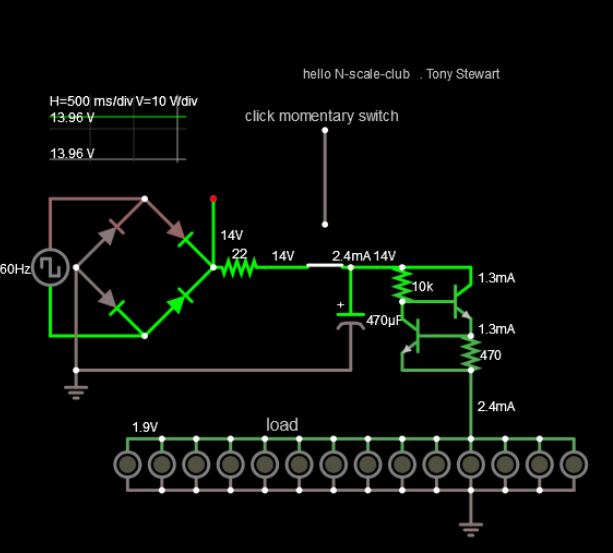 Adjust to suit your requirement.

P.S.
There is a risk after ? hundreds hours of use that the LED's go dark using only 100 uA. This is common effect and some MFG's warn against using below ~ 1~2mA currents. It just means the threshold for photoemission has risen above what was used due to an effect caused by such low currents. Pulsing to 10mA may or may not restore this dim light suitable for N scale realism.

The other approach is a 0.5% duty cycle pulse @ 200mA (shared) with 20kHz a Schmitt Inverter clock after this current limiter set for same 200mA or R3= approx. 3 Ohms could prevent this with the same low pass filter on supply and same average current.

To cut number of LED's Current must also be reduced with higher Re.

Not the answer you're looking for? Browse other questions tagged led zener model-railroad or ask your own question.

0
How to size a resistor for use with an unmarked Zener Diode?
0
Switchable regulator with a Zener diode
5
Zener Diode + fuse overvoltage protection for LEDs with constant current driver- fast or slow blow fuse?
1
Current reading in a simple LED circuit
6
Why does voltage drop in a simple zener diode based voltage regulator?
0
Capacitive dropper power supply for LED - zener/decoupling capacitor?
2
For a Zener diode voltage regulator circuit: Why can't you place the resistor after the Zener diode?
0
High-power LED Shunt Protection using Zener diodes with constant-current LED Driver
0
Voltage divider with a Zener diode