I have built a circuit according to Dimming 230V AC with Arduino, with two output channels. The basic principle is:

We have connected four (not seven, as originally written) 35 W halogen lamps to each output. This is about 500 mA when they are all on.

When testing it with one lamp, the circuit worked as desired. With all 4 lamps, one Triac simply broke apart. Why/how can this happen?

The measurements below are always with a single 28 W halogen bulb.

After the comments, I have built a new board with a BTA316-600D which stands 16 A rms. It is now attached to an Aavid 5297 heatsink which can dissipate 14 W of heat at ambient temperature of 45 °C, which is the maximum power dissipation of the BTA316 at 12 A.

The halogen lamps have a cold filament resistance of 136 Ω (measured with the Ohm meter), which would result in 1.7 A (rms) flowing through the filament of each lamp while it is cold, as opposed to 120 mA when it is hot.

To measure how much current is really flowing and when, I started with a 0.5 Ω 3 W shunt in series to the halogen lamp. The current flowing through the halogen lamp would then be calculated by the voltage drop across the shunt resistor.

Trying to measure the voltage drop with a Picoscope failed because, as I then learned, the ground reference of the scope probe is connected to the case ground and thus also to the USB wire ground and my Laptop ground and finally the power plug ground, which triggered the RCD fast enough to prevent additional harm.

The next attempt was to use one probe on each side of the resitor, this time with a Rigol DS1054Z which can measure 230 V AC. However, the measurements turned out to be too imprecise and too low-res to measure mV differences at the 230 V range. The delay of the voltage difference is a bit odd too.

I had the opportunity to get some measurements with a current clamp (yellow) and a differencial probe (green) connected to a Keysight 4000 X. Here, the measurements while the dimmer was active were as expected. The current stayed below 1 A while ramping up. However, when just turning on AC power (with a power cable with built-in switch, as used for turning lamps on and off), we measured peaks up to 10 A during < 200 ns. 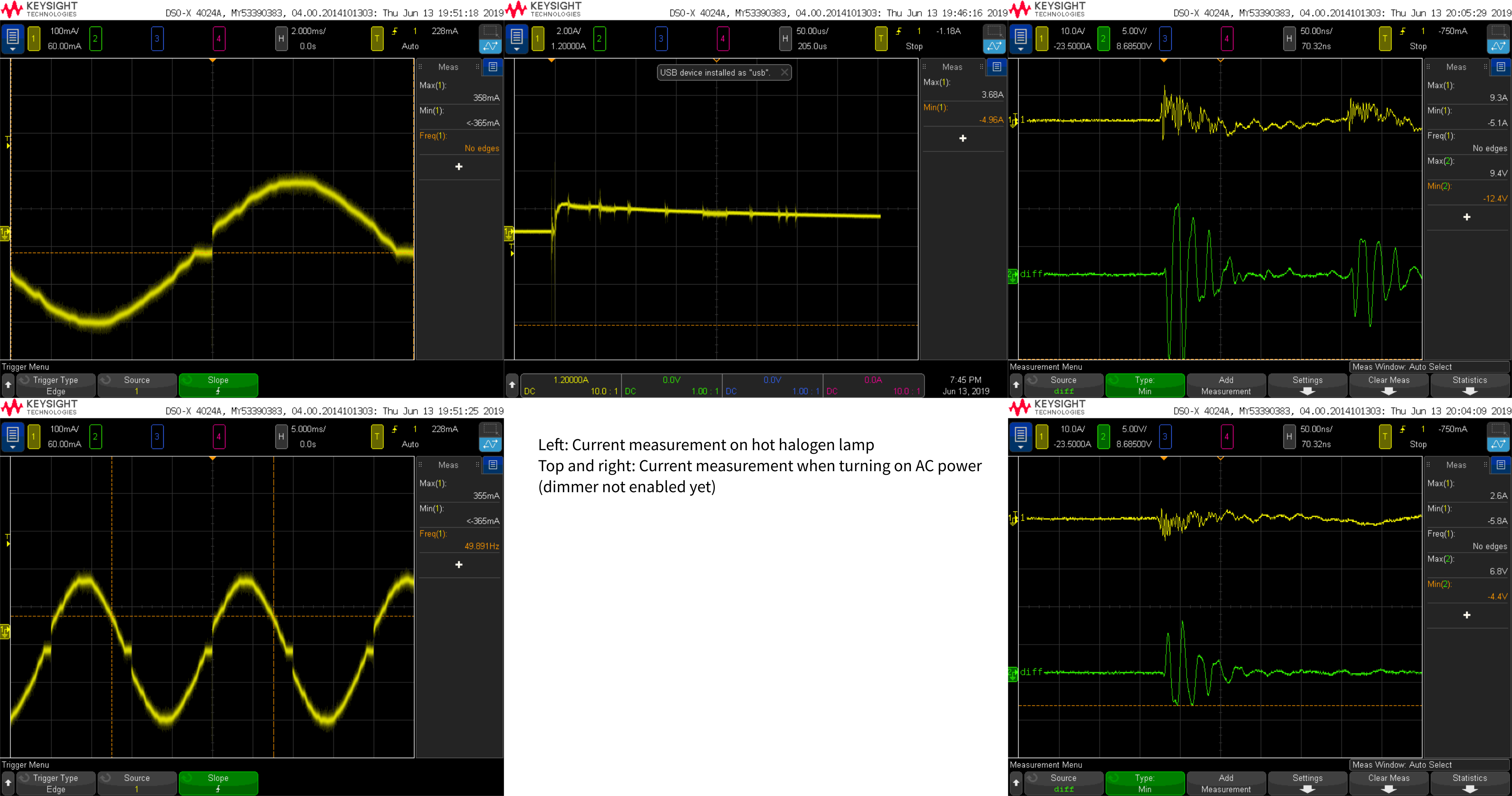 While this gives some insight into what is happening, it does not answer the question for me. The current flowing through the Triac while ramping up is relatively low. The peak when turning on AC is weird (why does it occur?), but very short as well.

This is the schema: 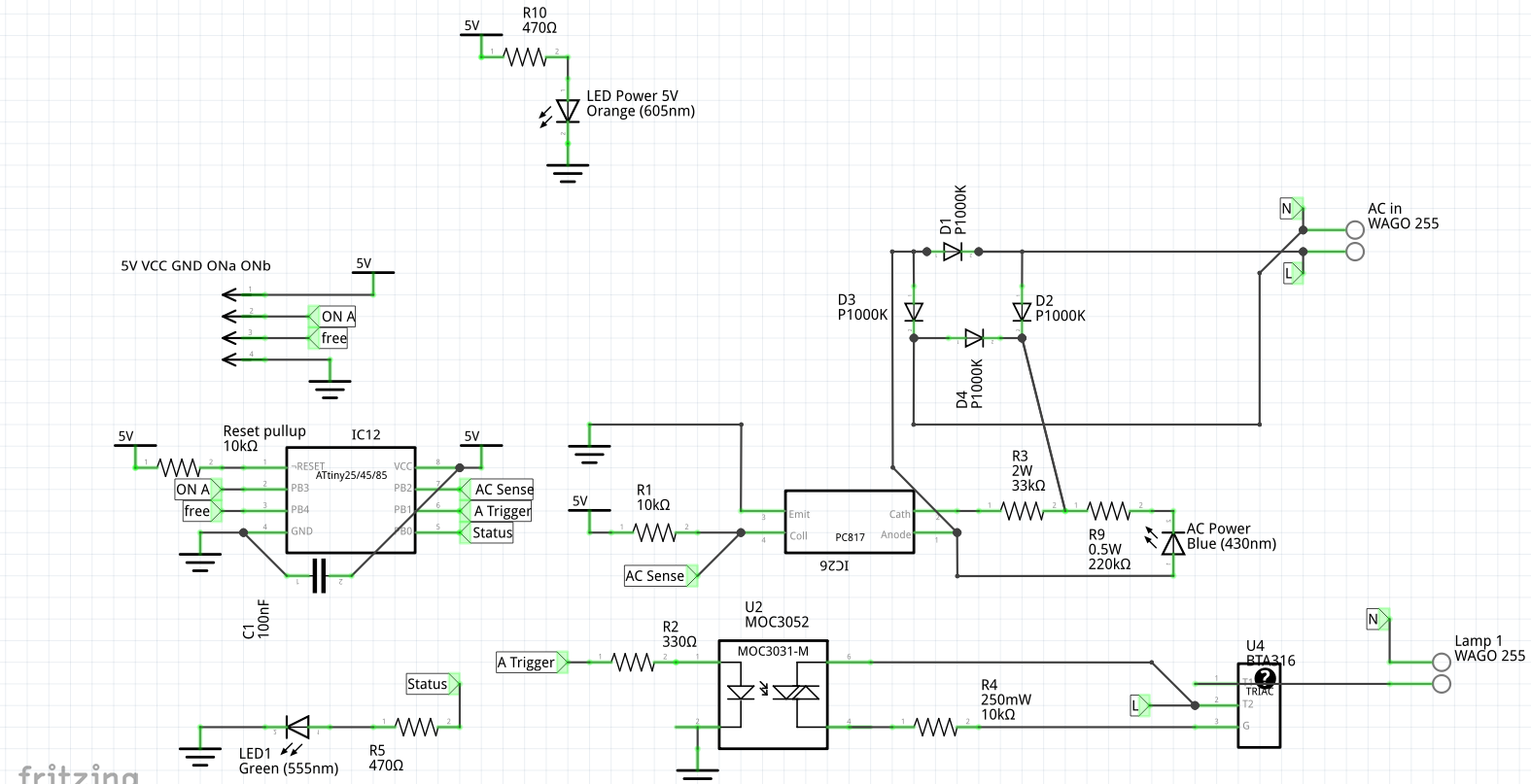 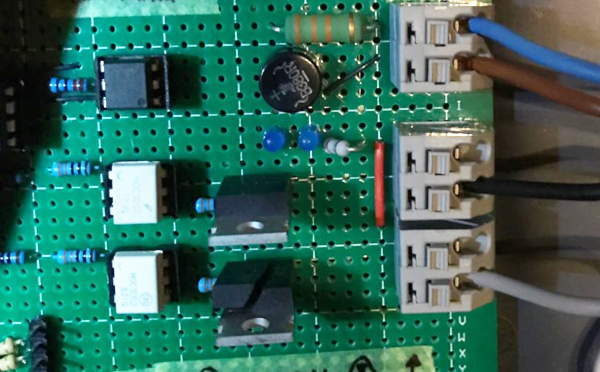 A close-up of the triac, the two parts bent apart for better visibility. 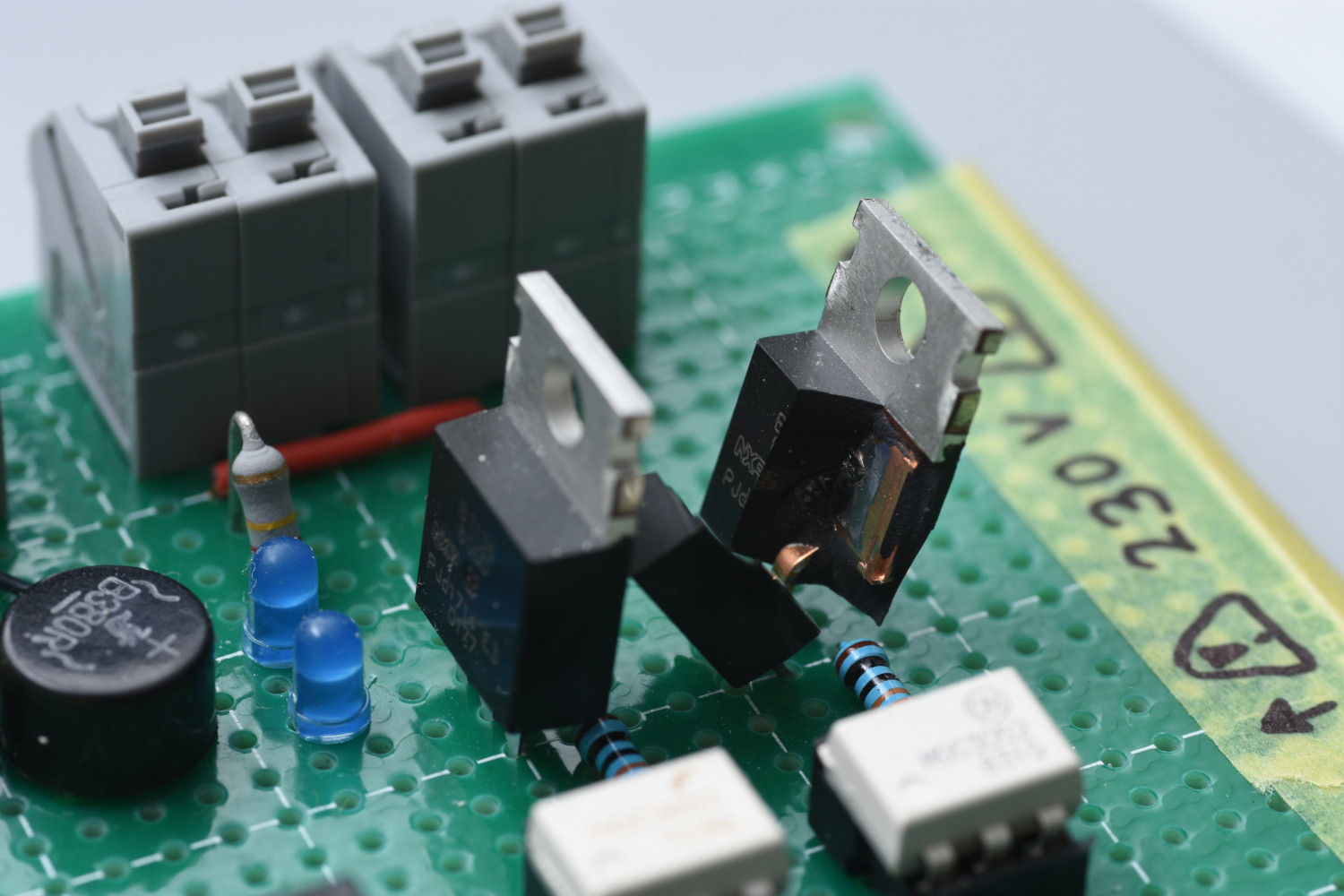 Browse other questions tagged ac triac attiny or ask your own question.

-2
How to calculate snubber value for triac

2
Problems running a triac dimmer off a UPS
5
TRIAC turning on asymetrically by itself when it gets warm
6
Turn a mains light on slowly
0
Triac BTA316 does not turn off
1
Triac dimmer makes audible noise (hum or buzz)
0
Switch AtTiny1614 on and off
2
Help for TRIAC strange behavior
2
Why did this TRIAC dimmer burn?
0
How to connect live and neutral and earth connection in AC devices plugged into socket?
1
Bidirectional TVS supressor instead of Snubber for Triac