What does voltage really do?

I bet that I am misunderstanding something so if you could also explain that, it would be greatly appreciated.

This is the last question I’m going to ask for a really long time, so I hop it sends voltage home for me...

As has been explained multiple times in the answers and comments to your previous questions you are confusing a physical property (energy) with the units of measure (joules). "... making the current move faster by using more joules ..." should read "... using more energy".

Voltage dividers are usually made of resistors. Resistors limit current.

And if so, how do you find out how much current is per volt?

1) Why does the current only increase in a circuit with resistance?

I mentioned resistance as an example because they are linear. Other devices don't behave in a linear fashion; LEDs, transistorised circuits, constant current circuits, etc.

2) How does having more charges (electrons in this case -> amps) increase the velocity of the charges, and why would velocity increase the amount of charges electrons in a certain space rather than just speeding up the electrons?

To increase the amount of water going down a channel (the current) you have to speed it up or make the channel wider so that it goes at the same speed. To get more current through a point in a circuit you increase the current density (and therefore the speed of the charges) or you increase the conductor width and maintain the same density (current per unit area - measured in A/m2). 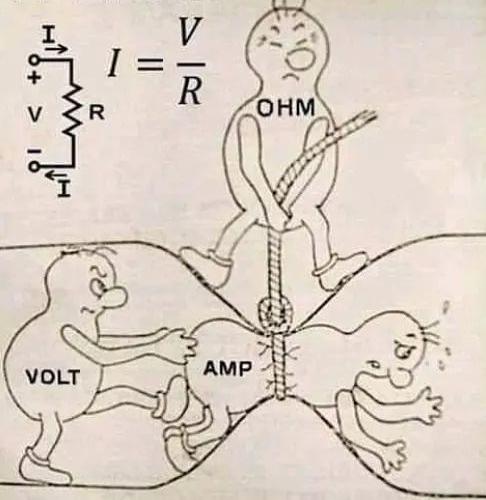 Electric potential is the same as voltage.

Resistance limits current. Using two resistors will create a ratio of voltages. The current is dependent on the sum of the resistors.

2
Reading a voltage divider schematic
2
From node to node, do units of charge lose energy over a constant period of time?
0
Confusion about current and voltage
0
Does electric potential influence the direction of current?
0
Switching positive and negative voltage
3
Intuitively, why does voltage drop across a series circuit?
16
What, exactly, is voltage?
1
Confusion about relationship between energy per coulomb, and the amount of coulombs in current