components within a triangle in an electronics diagram 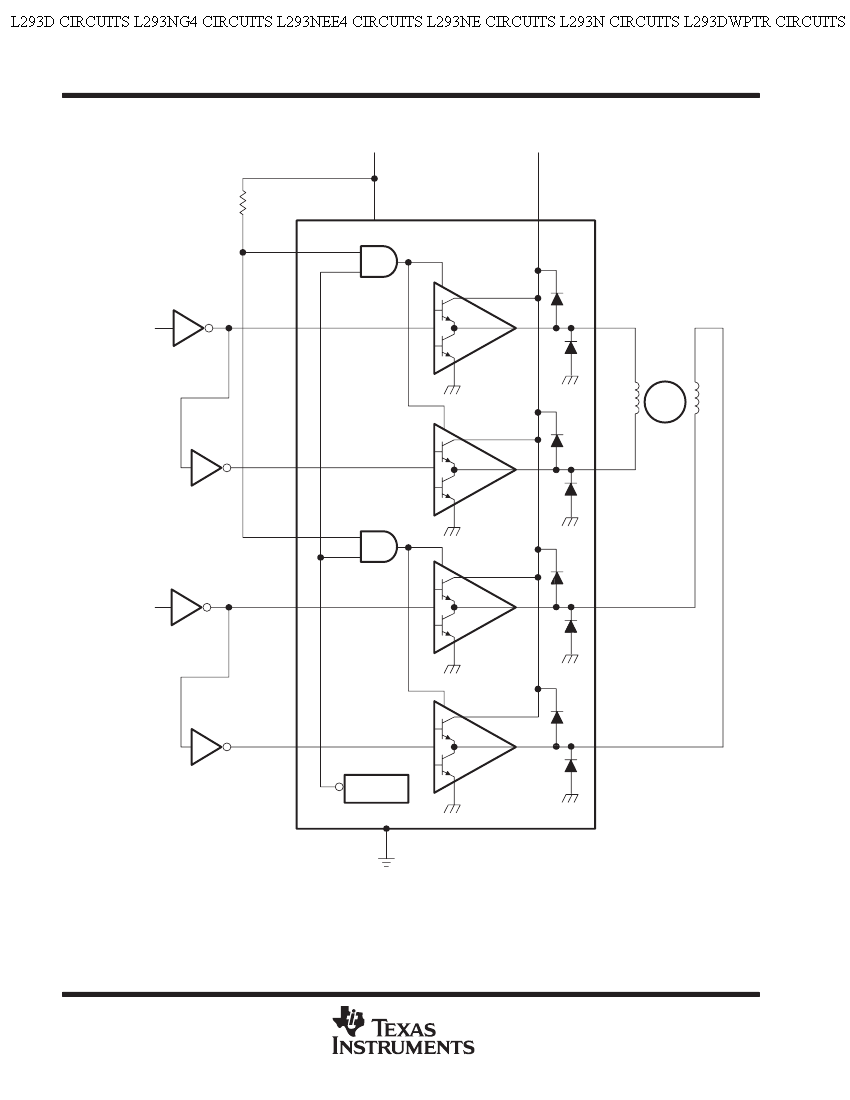 Specifically, the four triangles within the L293D component. So I understand there are two transistors in there, connected in series from 24v to ground, but what is connected to the bases of the transistors, the lines just end...

The triangle is a symbol for a buffer, driver or amplifier, whatever you call it.

The transistors drawn inside the triangle are there to let you know what is the type of your output. Thanks to this drawing you can see that the outputs are switched via BJTs between the power supply rails using some kind of Push-Pull topology.

Knowledge about the type of output is useful. If those were power MOSFETs, you would expect them to exhibit different behavior than BJTs. A BJT will have a voltage drop whereas a MOSFET will have a resistance between drain and source.

So, in short, the triangle symbolizes your driver/buffer and the transistors are there to let you know that the output was made using bipolar transistors.

That is just a notation, not by any means a schematic. The "triangles" themselves symbolise high current drivers, the two "transistors" drawn there are just to symbolise what the circuit is doing. There more components "inside the triangle", that for sake of brevity are not displayed.

This is similar to pseudocode and real source code in a given programming language. This is a "pseudo-schematic" of the chip.

BTW: Why do you want to get to know what's inside the IC? Would you like to get higher current output, because the chip itself could not drive the motor you want to use?

A triangle with one input and one output usually represents a buffer: it copies its input to its output, usually at a greater signal strength, usually cleaning up the input signal to logic 0 or 1.

Those transistors are probably exactly what the output stage looks like: a PNP transistor connected to the power line and an NPN connected to ground, only one of which is on at once.

A triangle with two inputs and one output usually represents an op-amp.

The simplified schematic of the buffer inputs "just ending" is supposed to be intuitive to indicate the decoupling of noise from the load to the input as well as source supply.

When you drive high currents with logic you risk getting supply noise back into your logic and this degrades the reliability of your signals which can cause glitches or false triggering. This is especially true of any reactive loads and motor loads with commutation noise.

The beauty of this design is that the logic and drivers use separate supplies. Although they share common ground potentials, careful design (beefy ground tracks and/or ground plane and/or isolated ground distribution can mitigate noise ground-shift false triggering from EMF kickback diode shunt current or other surges. By the way these drivers also have ESD protection and diode clamps built-in for inductive loads. Designers are wise to use common mode chokes on stepper motor loads to reduce EMI.

The complementary driver is often called a "half-H" or "half bridge" switch. When the load is connected between two such half-H drivers with one side inverted, you can get twice the load swing useful with bi-directional motor control with PWM controlled by the enable signal then you have a full-bridge of full-H driver configuration. Dead-time control to prevent shoot-thru or shorting of the supply to ground via the complementary outputs becomes a critical design factor in high current inductive loads.

TI describes it as follows:

Not the answer you're looking for? Browse other questions tagged schematics h-bridge diagram or ask your own question.

13
Can I wire the two sides of a L293D Dual H-Bridge together if I only need one H-Bridge?
1
MOSFET based H-Bridge Circuit
0
Help building a scheme (involves L293D H-bridge)
3
If two BJT bases are shorted, where does the voltage come from?
2
Ultra-basic question: where is the voltage in this simple circuit diagram?
0
Confusion with interpreting a functional safety diagram of a motor driver
0
What is the triangle components in this diagram?
0
Trying to understand schematics of a microcontroller (TM4C123GXL)
0
Interpreting triangles in RC high pass filter circuit diagram
0
How would this transistor diagram be drawn if we draw it with all the closed circuits?