Can anyone explain the point of this dual PNP/NPN set?

I like to consider myself fairly experienced in Electronics Design, but upon being contracted to review this schematic I'm a little stumped. This is basically the output stage of a boost power supply: 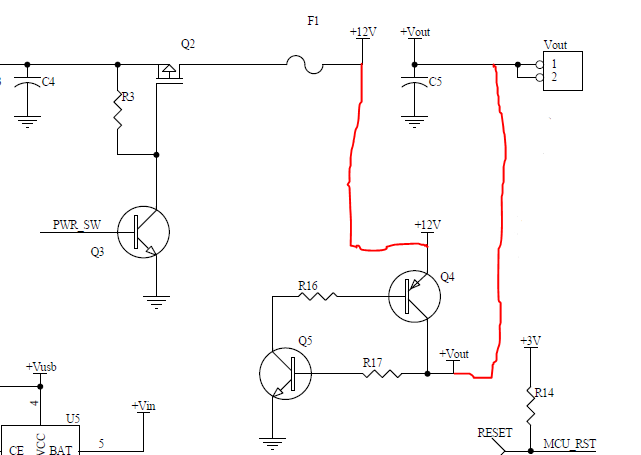 I've drawn in the red lines to symbolise where the power actually flows. The MOSFET Q2 on the top left makes sense (although there is no base resistor for Q3, which is the first mistake I pointed out. 3.3V from a micro directly to a 0.7V base-emitter diode, youch!). This is just a P-FET power switch.

What's weirder, but, is after this - the Q4/Q5 pair. Q4 is another P-doped transistor acting as a switch, but the net driving its base in Q5 - and what's driving Q5? The output of Q4! It's a paradox if you ask me. There are two main concerns from me:

Thanks. Any insight from people would be great, as it seems like a handy little tool for preventing short-circuit overcurrent (although these days, this sort of protection is built into a lot of chips internally). But it looks to me like it hasn't quite been executed correctly, and it needs to be a depletion mode MOSFET there instead so it at least has a defined initial state.

The circuit is a latch.

Assuming the starting voltage across C5 is 0V and Q2 is on, Vbe of Q5 is 0V and will stay that way, unless some other (unshown) part of the circuit pulls up the voltage of the +Vout net, turning on Q5 and then Q4.

From there, I see two possible answers :

I (and all the commenters) would favor the second theory, which is confirmed by a few other elements, like the lack of a base resistor on on Q3 or filtering globally.

In Conclusion, check the rest of the schematic for something that could boostrap +Vout, or other examples of copy-pasted circuits that do not belong.

Not the answer you're looking for? Browse other questions tagged transistors analog or ask your own question.

28
How do I make the turn off and turn on time equal in a NPN transistor?
10
Can someone explain how this transistor comparator works?
4
Transistor Push Pull Stage to drive Mosfet
0
Charge Pump Circuit explaination
0
How to forward the body diode of the mosfet without triggering the parasitic bjt?
0
What transistor setup to use for level shifting to create a logic ENABLE signal (for DC-DC converter module)
0
Understanding the Base voltage of PNP when driving NPN transistor is cut off and there is no clear DC bias voltage
2
Simple fast short circuit protector for circuit
37
What is this unusual NPN-PNP transistor pair?
0
2N2222 Always On Issue