What is the physical meaning of negative resistance?

I am a bit confused about the physical meaning of negative resistance.

Mathematically, a component which has negative resistance shows a decreasing voltage across its terminal when the current inside it grows, and vice versa. But how is this physically possible?

There are a number of mechanisms that result in a region where locally increasing voltage results in locally decreasing current. For example, an Esaki (tunnel) diode. 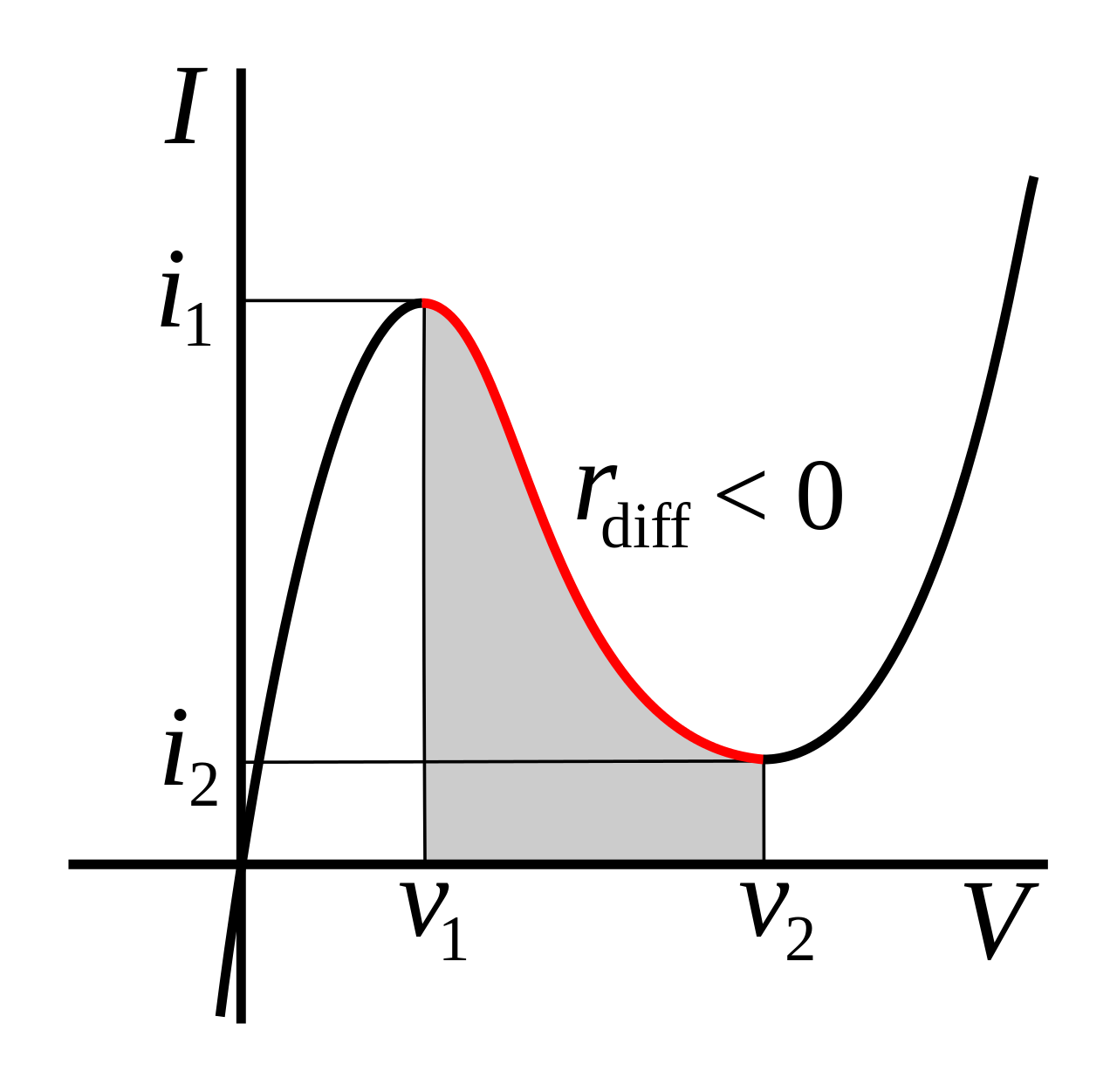 A common example would be a switching power supply with a steady load. Assuming the efficiency is more-or-less constant, increasing the input voltage results in less current being drawn. It is always consuming energy though.

A stand-alone component that exhibits negative resistance (rather than negative differential resistance) is not possible without some kind of energy source within the component, otherwise it would violate conservation of energy (\$P = E^2/R\$) and negative P would indicate it is acting as a power source.

If you want to play with a negative resistance effect, one way (assuming you don't mind one end being grounded) is to use a negative impedance converter:

The above circuit acts like a -10K resistor with one end grounded (within its linear range), and works down to about zero volts. Any power it produces comes from the op-amp supplies.

In this context, we have to discriminate between (1) pure differential (dynamic) neg. resistances (as shown in the examples of the other answers) and (b) a static negative resistance.

My following answer concerns only the static negative resistor:

Hence. it is a voltage-controlled current source. For such circuits only active realisations are possible (using transistors or - in most cases - opamps). The most popular circuit is the NIC (Negative-Impedance Converter). 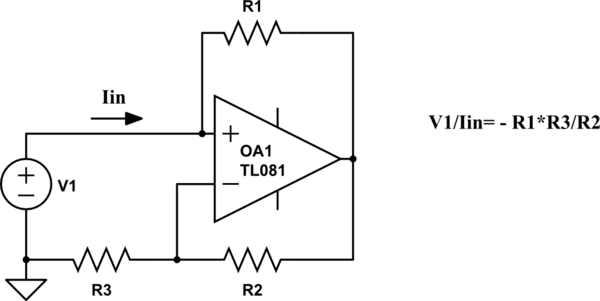 Comments: The shown NIC is stable as long as the source resistance of the voltage source (not shown in the figure) is smaller than R1. These NIC blocks are use for undamping filters, oscillators and other systems with unwanted positive (parasitic) resistances. Mathematically, they can be treated as "normal" resistors in series and parallel combinations - however, with a negative sign, of course.

A very popular application is the "NIC integrator" (or "Deboo integrator"), where an NIC block is connected to the common node of a simple R-C lowpass. In this case, the NIC can compensate the pos. resistor R - thus resembling a current source which loads the intergating capacitor.

Perhaps a voltage source is mentioned, because we all know that an ideal voltage source should have zero internal resistance: a good one will have a small positive resistance, to which is added any wire resistance going to the load.

For an electronically regulated supply, it is possible to force output resistance past zero into negative resistance region. This is done by routing some of the load current so that regulating voltage node is adjusted in such a direction that output voltage is forced up. An example of the common LM317 regulator having negative output resistance is shown below - beware, some loads produce wild results: 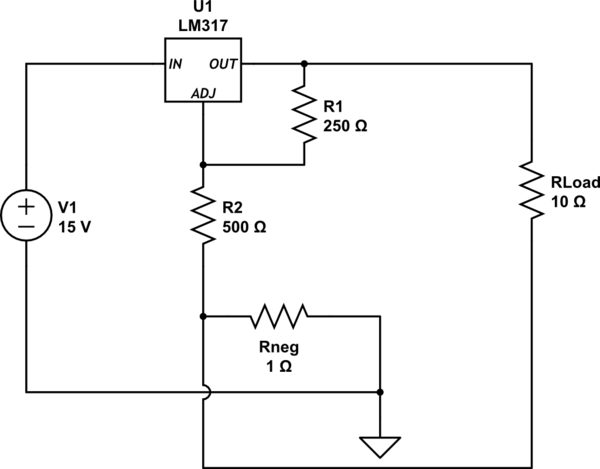 simulate this circuit – Schematic created using CircuitLab
Using the built-in circuit simulator, \$ R_{load} \$ was swept from 5 ohms up to 15 ohms:

The result of that 1-ohm resistor, (and the direction of Rload's current going through it) forces this voltage supply to have negative resistance: at heavier loads, the output voltage goes up. This voltage increase can compensate the voltage drop across the wire resistance.

Anything that drops in voltage with a rise in current has a negative resistance.

But how is this physically possible?

Some components, like Esaki diodes and glow tubes, have an I-V curve that is entirely in the I and III quadrants, but has a negative slope region over a limited range. In this region, a small-signal model of the device will have negative resistance. 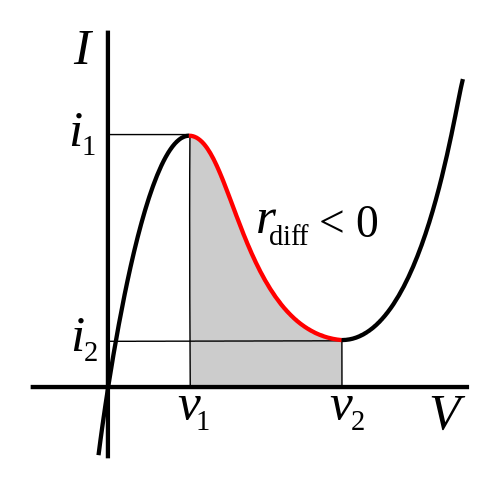 In the Esaki diode, this behavior is caused by tunneling current that is possible at low bias but not at higher bias voltage.

It's also possible to make an op-amp circuit with negative input resistance over a limited range. There the I-V curve can even pass through the II and IV quadrants since power can be supplied from the op-amp's power terminals.

Somewhere I have read that an example of component with negative resistance is a voltage source.

Looking at the input side of a regulated switching supply with a fixed load, it will often appear as a negative resistance.

This is because it is a constant power load. If the input voltage drops, the regulator circuit will increase the current drawn in order to continue supplying the load with the desired output voltage.

Although the negative resistance is veiled in mystery, in fact it is a quite simple concept. It can be easily explained by analyzing the voltage drops across resistances.

The main question is, "How does the negative resistor add its voltage?" There are two techniques to do it leading to the two kinds of negative resistance - differential and absolute. 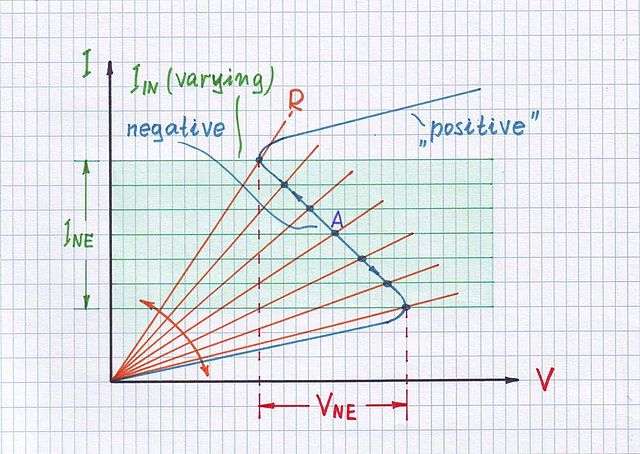 Negative differential resistor is, in essence, a positive resistor that subtracts its voltage drop V = I.R from the input voltage. But in contrast to the positive resistor that has constant resistance, it is a dynamic resistor that significantly decreases its resistance when the current slightly increases. As a result, instead to increase, the voltage drop (the product of the increasing I and the more vigorously decreasing R) decreases... and this is equivalent to adding voltage. This is the trick - reducing the loss is actually a profit. 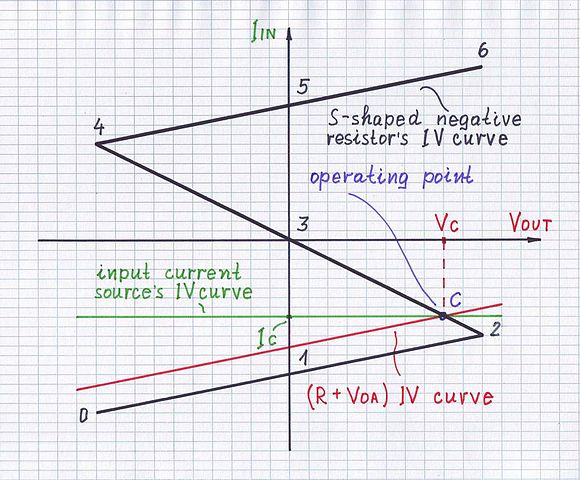 Absolute negative resistance is done in a more natural way - by a dynamic voltage source (electronic circuit). It changes its voltage proportionally to the current (like a positive resistor) but adds it to the input voltage (instead to subtract). For the purpose of addition, this voltage has an opposite polarity; hence the name of this circuit - “voltage inversion negative impedance converter” (VNIC).

The ordinary voltage source is not a negative "resistor" since its voltage does not change proportionally to the current... it is not dynamic... it is constant. Rather we can think of it as a kind of "Zener diode".

It is likely the related discussion in ResearchGate will be of interest to you:

And why are there two more types of negative resistance?

The resistance of a non-linear device varies and at a given voltage the equivalent resistance is equal to the slope of the line. If the slope is negative in a range, that range has negative resistance. 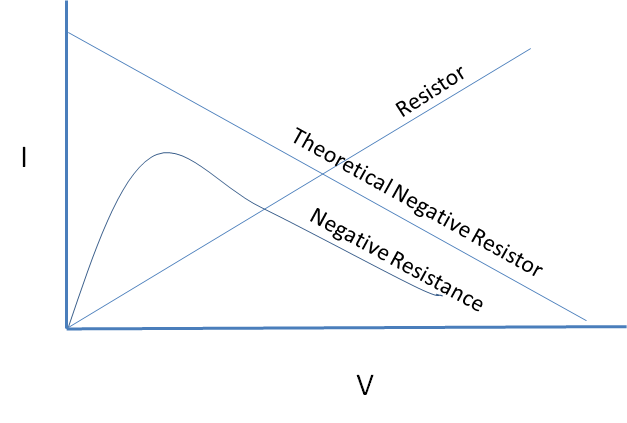 Somewhere I have read that an example of component with negative resistance is a voltage source.

I guess that the "voltage source with a negative resistance" is a crucial missundertanding.

The error is probably the following :

One is tempted to think that the resistor is negative.

In fact, the minus sign comes from the conventions used to describe the sign of the U and I. These conventions are different for sources and passive components

Not the answer you're looking for? Browse other questions tagged voltage current resistors resistance voltage-source or ask your own question.

6
How does current flow through a voltage source?
0
Does electric potential influence the direction of current?
0
Reversed Current in Passive Loads?
0
how does negative differential resistance in a PCT work?
0
How can a grounded gate MOSFET conduct current?
1
In a DC circuit with one battery and one resistor, why does the voltage drop remain the same irrespective of the value of the resistor?
2
Visualizing Electrical Potential
1
Does voltage limit current?
0
How can an electron have 0 electric potential after exiting a resistor but have current?
0
voltage across low resistance and short circuit