What code issues could persist past a reset? (STM32F103)

I have a project running off a Bluepill board (STM32F103C8T6) that ceases to function only after it runs for ~6 hours. Up to that point it behaves totally normally, and UART logs don't indicate anything out of the ordinary until it just stops. This has made it very painful to debug since it's so difficult to gather information and attempt iterative solutions.

The only lead I have is that when I find the device in the hang state, it cannot be reset properly. In the first few (correct) hours of operation, rebooting the device plays a speaker and blinks an LED. After the hang, resetting results in a solid LED - no sound, and no operation past that point.

Only when I power cycle the device does it return to normal operation, and then everything works exactly as I want it to for another ~6h before it hangs again.

Conventional wisdom would suggest this is a memory leak or a timer overflow, but I don't see how either of those could persist past a system reset! The Bluepill is attached to I2C and SPI devices, but even when those are removed from/returned to the circuit it does not reset properly, and there's nothing else in the circuit that can hold state. I've also heard that an unconnected VBAT could cause this but it's connected to VDD, and reading the datasheet shows no unexpected NRST behaviors.

I'm reluctant to post all 250 lines of code for this project because I haven't been able to narrow down the cause of this at all, so I'm trying to stay general with this question. What kinds of code bugs are capable of surviving an MCU pin-based reset, but not a power cycle?

EDIT: Here's the schematic. VBAT was manually connected to the 3.3V pins later. 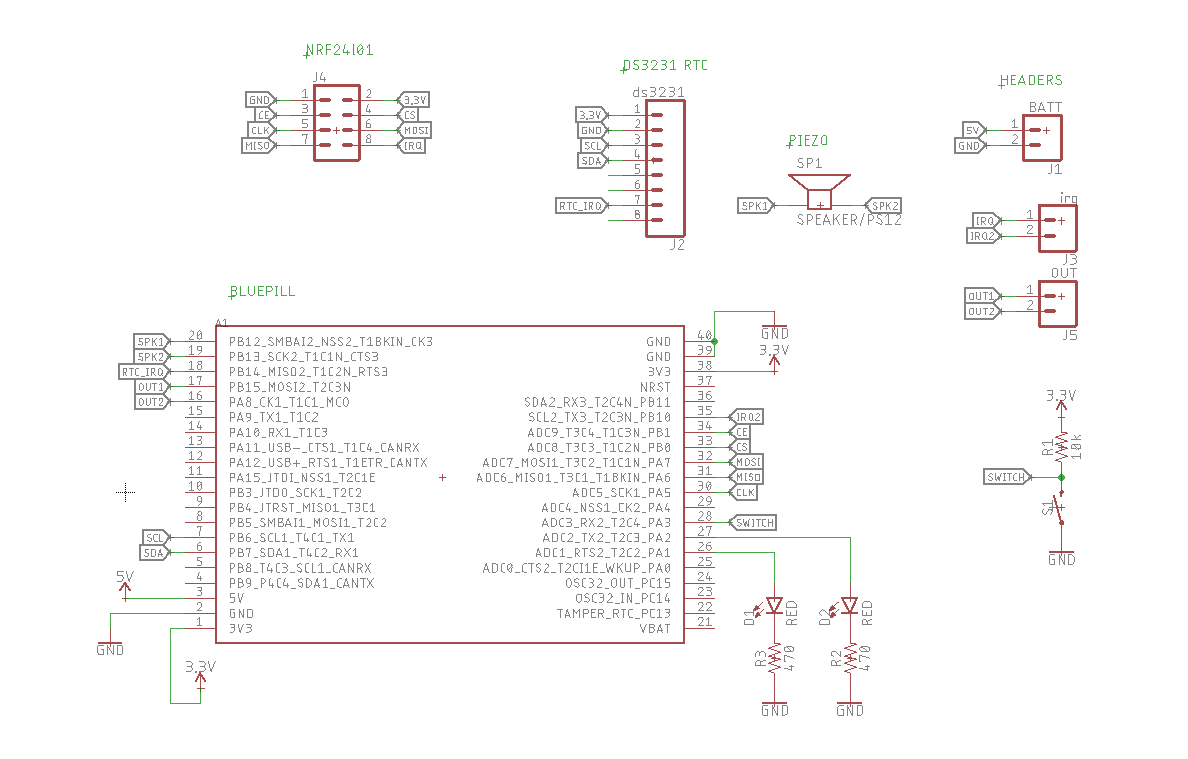 EDIT: This is terrible form for stack overflow but here is a pastebin of the code. I hope to condense this to only the problematic code ASAP but due to the massive repro time I've had issues narrowing it down. https://pastebin.com/nKDyzRKa

Maybe something is being clobbered that you are not initializing in your code and that is not automatically initialized by the reset. When the power is removed it may take on a random value that happens to be okay.

250 lines of code is not very much, but maybe you can further reduce it to try to isolate the problem. If you have a debugger attached to the system when it hangs, the cause could be related to the external system.

The microcontroller datasheet p. 59 mentions a few things that EMC hardened software might worry about:

It also says you can provoke some of these failure mechanism by manually pulling RSTN or Oscillator pins down for ~1 second.

The datasheet also mentions some failure monitoring mechanisms (supply, clock) that could trigger an interrupt. Have you tried reading the interrupts after the failures or is the device non-responsive on all interfaces?

Many kind of issues will persist past reset. In your case you said there are I2C peripherals so the answer is easy. For example what happens when the reset button is pushed while MCU is reading or writing data to/from slave chip? The slave chip does not know that the CPU just went away and if the slave was pulling SDA pin low (data or ack bit), it will continue to do so forever. If the MCU just initializes the I2C peripheral as usual and tries to start communication with the slave, it can't generate a start condition as it regards the bus being not idle as SDA is not high. So instant jam situation after reset, until power cycling or resetting the slave. Therefore the results of I2C operations should be checked after a timeout expires. Then you can blink leds differently to signal an error. Or perform a sequence to bring the slave out of that situation manually.

Not the answer you're looking for? Browse other questions tagged stm32 reset stm32f10x or ask your own question.