I'll be making a "micro thermal power station" in the single-digit watt range at home (one-off, educational project. Bear with me). A heat source, likely ethanol, will cause a stirling engine to turn a DC motor, used as a generator. The topic of the educational part is to focus on efficiency. To this end I want to see where the energy is wasted on each stage. Measuring the electrical part (after the generator) is easy. The problem is the previous stages (heat→motion and motion→electrical). Also measuring the end-to-end efficiency is not hard (X ml of 95% ethanol is Y joules and so forth). The biggest unknown is the heat→motion part. I tried asking the stirling engine manufacturers and they haven't measured it. But if I figure out the generator part, then I can infer the heat→motion part.

Efficiency of DC motors when used as generators

I have several DC motors laying around at home, some DC (e.g. Mitsumi M36N-2), some BLDC (selected inrunners with Kv about 250). From what I've seen in datasheets like the Mitsumi's it is expected that the motors have the highest efficiency (when used as motors) when they are lightly loaded (around 10% of the stall torque). Is it reasonable to assume that the efficiency peak when used as generators will be in the same conditions?

Most of the motors I can use don't have datasheets, so their efficiency is unknown. I don't have a dynamometer, otherwise this part would've been easy. I came up with a method to measure the efficiency:

So I have something, but seems too cumbersome, and it also introduces other unknowns. I'm wondering about other approaches to this measurement problem. I may be missing something simpler. Any ideas?

The question may be more appropriate for other SE sites. Please suggest if you think it's better asked elsewhere.

When determining efficiency, keeping track of where the energy is going can be quite difficult. If the motor efficiency is 70 percent, the losses are 30 percent of the input. If you can only determine the input power and output power with a 95 percent accuracy, the actual input power could be 5% higher than measured and the actual output poser could be 5% lower than measured. That means that it is possible that the losses determined from input and output measurement may be up to 33% higher or lower than the actual losses.

With the thread and spool method, you must consider the energy lost in the friction of the mechanism and the potential energy converted to kinetic energy of the falling weight and the rotating mass.

What Chris Stratton suggests is essentially constructing a dynamometer using the motor as an absorber. The diagram below shows what is required. The trunion mounting system allows the absorber housing to turn freely by a few degrees to allow the scale to measure the force exerted by the arm extending from the housing. Torque is the force multiplied by the length of the force arm to the shaft center. Torque multiplied by speed is mechanical power. 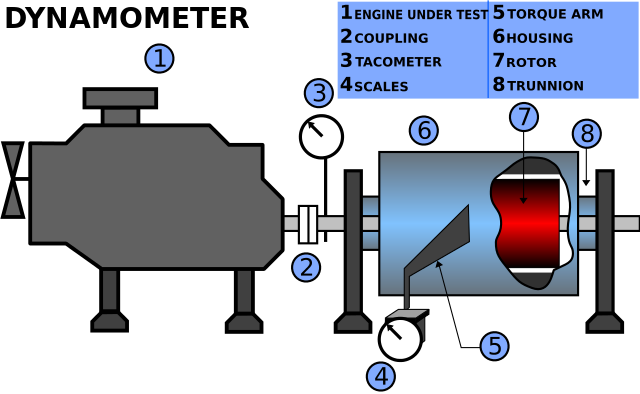 There are two main groups of losses in these machines.

2,3,4 tend to get lumped together, since they're modeled as a torque loss from the electrical power the machine is presenting to the rotor - the input power (simply V * I for a DC machine) less the Ohmic losses.

The upshot of this is, as you say, the efficiency peaks fairly low on the torque axis, as the output power falls away from the input power as the ohmic losses rise. Max power comes at about half stall torque. 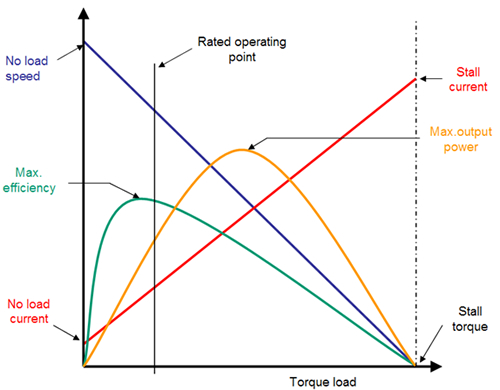 For machines that have a separate field, there's a test called a Hopkinson test that can be done on two identical machines with the shafts coupled together. You adjust the field strength until one of the machines generates the right voltage to be able to feed the motoring machine at full load current, and so the losses alone are fed from an external supply.

With a PM machine you don't have the luxury of doing that, but you can apply the principle. Running at the same current, the losses in both machines will be the same, so you can calculate the losses by the difference in the power supplied to one motor, and the power generated by the second motor generated into a resistive load bank. You don't get to know the torque generated, but that's not that important. You can calculate the mechanical power, should you want to know it, as the mean value of the two powers you measure i.e. the input power less half the losses, which should be in the first machine.

So all you need to do this is a power supply, two of the motors in question, some means of coupling them together, two each of voltmeters and ammeters and a load bank. If you adjust the load bank until the current generated is the same as the motor current, and measure the voltage at the output, you can determine the power in and out.

Not the answer you're looking for? Browse other questions tagged dc-motor brushless-dc-motor efficiency or ask your own question.

0
voltage, current, torque and speed in DC motors
0
How do I work out spec of 24v dc motor?

0
DC 5 Volts - 2100mAh Electric Motor Generator. How?
0
Comparison of the efficiency of DC motor current limiting / control methods?
1
How to measure the efficiency of a full wave rectifier?
0
DC motor efficiency which formula to use?
1
How to measure electric motor torque?
3
Can ANY DC brushless motor be used as a generator?
0
Designing a BLDC generator
0
gear motor can be used as generator
1
BLDC sensors placement
1
DIY rotary inverter technical and economical feasibility