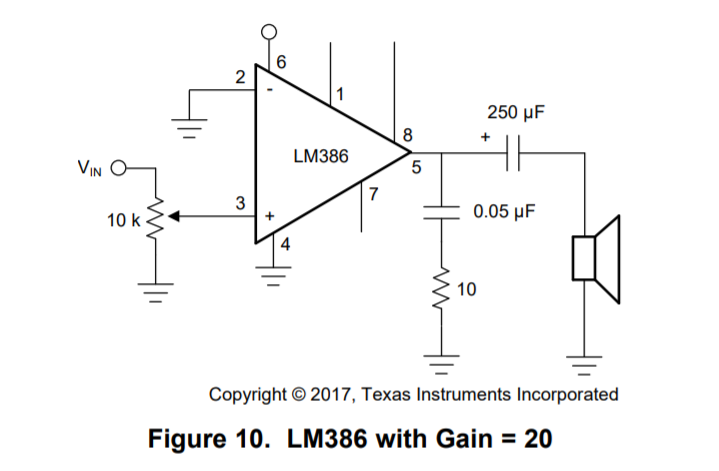 I am connecting the input of the LM386 to a function generator and driving it with a sine wave. Then, I am using a near field E-field probe to measure the electric field next to the speaker. My E-field probe is the broadband one in the kit linked below.

At the resonant frequency of the speaker (~510Hz), I am able to measure about 10mV pk-pk sine with the E-field probe right in front of the speaker diaphragm. The amplitude decreases when the probe moves away from the center of the diaphragm. The signal becomes very small or unmeasurable at other frequencies.

Opening up the speaker and looking at the voice coil, the wire wraps down and then wraps back up on the outside. The result is that both ends of the wire are at the same end of the coil and there are 2 concentric cylinders of wire.

As a side note, I am not able to measure anything with the H-field probe. Neither at the center of the diaphragm nor along the wires connecting to the speaker. I realize the bandwidth of the probe is much higher frequency and it may not be sensitive enough.

How is the speaker radiating E-field? Why is it only happening at the resonant frequency? Why is the phase different between the front and back of the speaker?

EDIT: After opening up the speaker I found that the voice coil is wound in a way that the two ends of the wire end up on the same side. This may disprove the hypothesis that there are opposite charges on opposite sides of the coil.

I am not sure about this answer. Please correct me if it is wrong. I thought of this answer with the help of @Dave Tweed's answer.

The speaker is radiating E-field because it has charges on opposite ends of the voice coil that are moving.

The analysis for these answers is shown below. 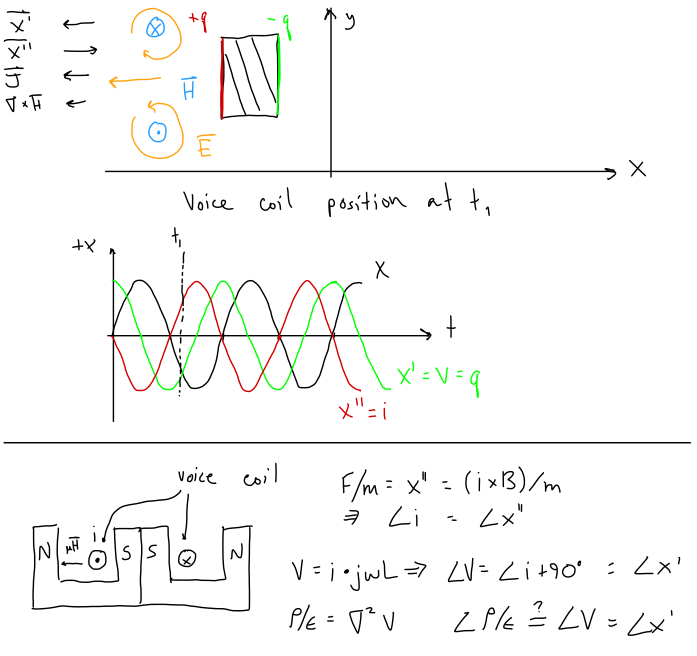 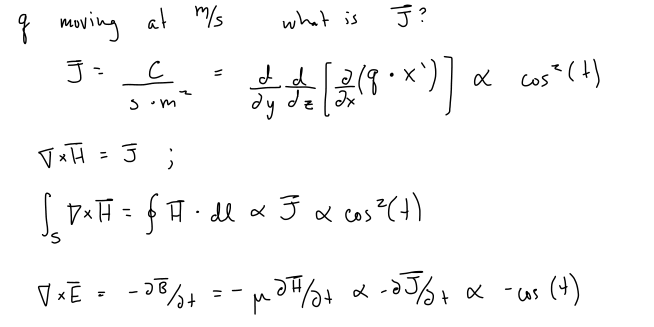 The metal case should give you lots of shielding. And the e-field should all be coming from the solder terminals and the coil-wires on the cone.

Since this doesn't appear to be the case, then probably your speaker has a plastic cone. If the plastic has been touched by fingers, or worse, rubbed against a plastic bag, or against clothing, then the plastic may still have a significant surface-charge of several hundred volts wrt earth. (How low is the humidity at your workbench?!)

Plastic typically charges negative when touched by human skin, so the moving speaker would produce a negative peak when it physically moves towards the e-field sensor. Also, as the charged speaker-cone moves in and out, it would produce a strong opposite charge on the metal frame, caused by electrostatic induction (as if the speaker cone is a vibrating capacitor plate, and the metal frame a second capacitor plate.)

Try holding the vibrating cone with fingers, to see if the large signal disappears when AC is applied yet the speaker cone doesn't move. If an electrostatically-charged plastic plate is vibrating, it will produce a strong AC e-field easily detected by nearby electrode-antennas.

To get rid of any surface-charging, perhaps use a slightly-damp bit of toweling to wipe down the entire plastic speaker surface. If after discharging the plastic, your strong signal is smaller (or even missing,) then the cause was a charged-up speaker cone, rather than the AC drive voltage. Or instead, before wetting it, try rubbing the speaker cone with a plastic sheet, a rubber balloon, or arm-hair. If this makes your e-field signal enormous, then you've found the most probable cause. (And in that case, also try rubbing it with plumber's teflon tape, or with a plastic bag, with rubber, paper, etc. Check for different polarity of sensed pulses!)

Also, using a vibrating or rotating surface is a classic way to create a "Field Mill" for detecting any e-fields which have no AC component. Your near-field probes can only detect the changes in fields, not the fields themselves. Attach a small disk of foil to your vibrating speaker, connect it to an AC dvm or scope-input using thin foil strip, then vibrate the speaker. See if you can use this Field Mill to detect a distant hunk of styrofoam which you've rubbed on your hair.

Also, you can sense a charged plastic speaker-cone by waving the gate-lead of a JFET/LED circuit near it, as with http://amasci.com/emotor/chargdet.html

How is the speaker radiating E-field?

The voice coil has a voltage imposed across it, plus it is physically moving back and forth. Together, these produce a measurable field.

Why is it only happening at the resonant frequency?

At the mechanical resonance frequency, the physical movement of the coil is greatest.

Why is the phase different between the front and back of the speaker?

Not the answer you're looking for? Browse other questions tagged operational-amplifier analog antenna speakers or ask your own question.

4
How to capture analog signal from a speaker magnet?
0
Loop antenna's electric field
1
Which informations do I need to calculate the efficiency and horsepower of a 3 phase induction motor?
3
Why do we want higher power factor in ac motors?
4
How is the minimum reasonable distance for the far field of a dipole antenna calculated?
1
Near field antenna for 0.3-100MHz
1
How does this telephone circuit modulate the current?
0
Characersitics of a traveling wave on a half wave dipole antenna