I am working on a system that can detect which of the AC outputs on a sprinkler box is on and for how long. The sprinkler box has one common wire and then 18 connections that output 24V to open sprinkler valves. My plan is to use several full bridge rectifiers which connect to some transistors. The Base of the transistor connects to the positive end of the bridge rectifier, the collector connects to a 3.3V line, and then the emitter is connected to ground so that when one of the sprinkler leads turns on it grounds the corresponding transistor. I then have a micro controller looking at the voltage of the collector side of the transistor to see which lead is on.

The problem I am having is that when one of leads from the sprinkler box turns on it flip on all of the transistors and grounds all of the logical leads to the micro controller. I did some tests with a multi-meter and when one of the leads of from the sprinkler leads turns on it is at 24Vrms and all of the other outputs are at about 1.4Vrms. The Voltage after being rectified is 35V on the input which is currently on, and then 34V across the all of the other rectifiers.

I don't know much about rectifying AC current to DC current but I am thinking the issue is with the common wire. I think the common wire may be creating essentially a half bridge rectifier and outputting a lower voltage that is still causing the transistor to ground the input. Anyone have any ideas of either how to fix this problem, or of what is actually happening? 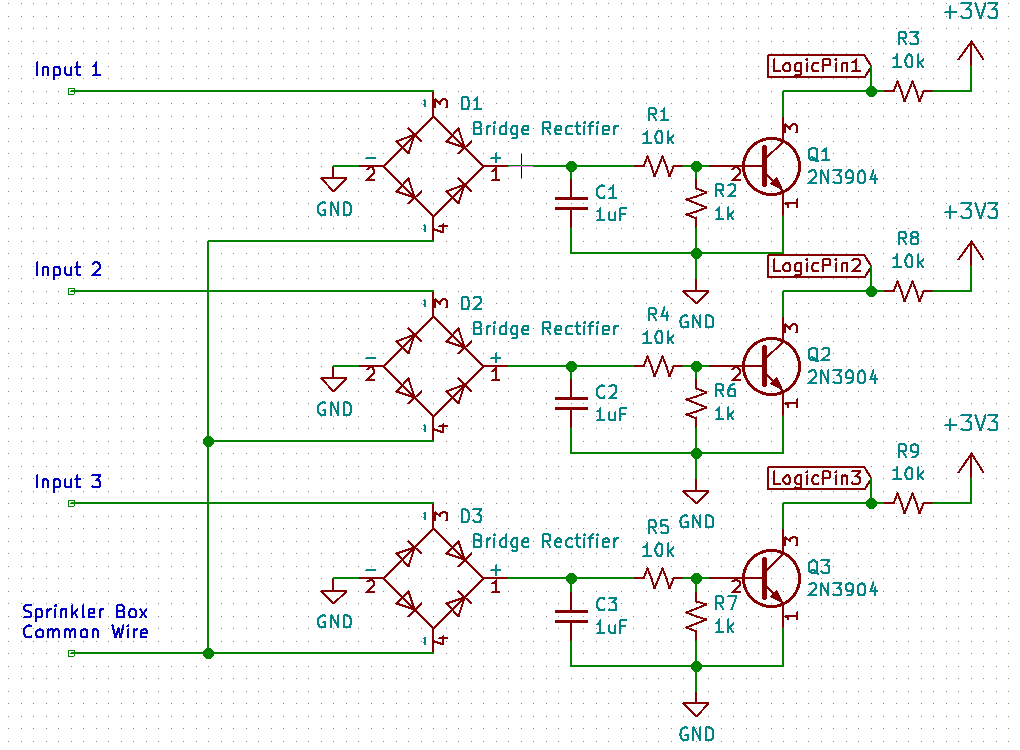 the problem with your circuit is that the input can cross-talk via the bridge diodes and the capacitors.

try this, it should give better isolation between inputs.

Optoisolators (AC input) would be an easy solution.

Or half-wave rectify the inputs (just a diode rather than a bridge and increase the capacitor values.. but it will be slow, which probably doesn't matter in this case).

I expect your problem is the Common is high side with low-side switching , and meanwhile you have low-side detection common, which will result in 2 diode drops at low current and thus 1Vdc lower on all the other bridges.

You can easily verify this and if so a better detection design be implemented.

1
Tactics for Controlling Heat in a High Current Bridge Rectifier?
2
Center tap transformer with full bridge rectifier, number of rectifiers
3
Use RMS or peak value of current for transformer selection
0
Is it possible to charge/discharge this cap fast enough?
0
How to get rid of floating voltage on Bridge rectifier
2
Difference between Peak rectifier vs Full wave rectifier
0
Sharing ground between two fully bridge rectified AC signals