So online, I found this 555 timer FM modulator circuit. But To make this a working FM transmitter, is all I have to do is attach an antenna to the output modulated signal? Or do I have to also have a series LC resonant circuit tuned to the carrier frequency?

The carrier frequency is set using the 5 kΩ potentiometer behaving as a potential divider with one end at Vcc and the other at ground. The frequency of the free running oscillator is set to approximately 455.50 kHz.

This is not in the FM radio band which extends from about 88 to 108 MHz so you will not be able to pick this up on your radio - unless you somehow manage to generate the right harmonics.

Here is a frequency modulation (FM) circuit that uses a 555 timer in astable mode to generate a sine wave carrier. GCSE students might find it interesting as they are often playing with the 555 timer IC.

GCSE is a UK second level school standard so I suspect that this might be part of a course studying basic electronics and that a matching receiver would be required.

With the components shown this circuit only produces about 3.5kHz, not the 'approximately' 455.5kHz claimed by the designer. I built it on a breadboard it using a uA555, then removed the 0.002uF capacitor to get the highest possible frequency, which was ~670kHz with the pot wound down to ground.

Here is the waveform at pin 3 captured on my oscilloscope:- 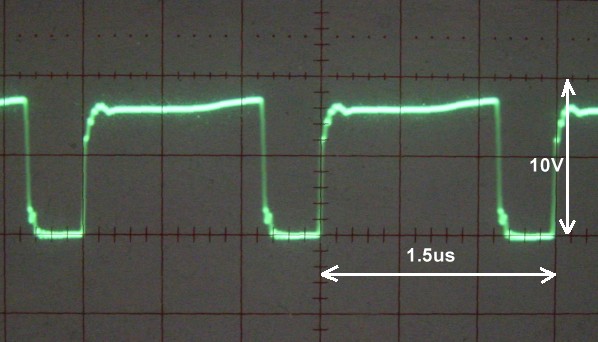 Without an external capacitor the waveform is highly asymmetrical because it is timed by stray capacitances in the wiring and inside the uA555. The rectangular wave has fast rising and falling edges, so it produces hundreds of even and odd harmonics up to the FM broadcast band and beyond. The signal can be tuned in at many places in the band.

I fed a 1kHz audio frequency tone into the 555's control pin, and it was clearly picked by an FM radio placed next to the circuit. I then hooked a 30cm piece of wire up to pin 3 to act as an antenna, and was able to receive a strong signal from the next room.

The optimum length for a 'whip' antenna is ~1/4 of the wavelength, which for the FM broadcast band is 2.78m (at 108MHz) to 3.41m (at 88MHz) so 750mm is commonly used. This would tune out the lower and higher harmonics to some extent, but to reduce interference at other frequencies to an acceptable level you would need to put a narrow-band tuned circuit between the 555 and antenna.

While this circuit does 'work', its poor frequency stability, reliance on parasitic capacitance and internal delays in the 555 (which could vary depending on the manufacturer), weak output and production of many unwanted harmonics makes it no more than a crude demonstration of FM radio transmission. In most countries it is probably illegal due to the massive amount of interference it puts out. There are many simple FM transmitter designs that are much better than this one - don't use it!

The author is confusing you with free running oscillator set to approximately 455.50 kHz which is the down-converted intermediate freq. , or IF frequency used for an AM radio.

This 555 timer circuit can generate FM square waves as a DC-biased VCO (or Astable) BUT only from 3.3kHz to 4.4kHz using the CTRL input, 0 to 9Vdc.

It is never useful for AM, FM or any radio design.

555's never have nor will be used in radio designs or any serious design for that matter.

Mr. Peter J. Vis appears to have good Windows/Network/Router skills but weak on Electronic design. I would look elsewhere for better basic electronics books such as on my profile.

The North America FM band is around 100MHz, which is a couple orders of magnitude higher frequency than a 555 can manage. You would also want a sinusoidal output so as not to splatter harmonics all over the spectrum (at odd integer multiples of the base frequency).

The circuit does demonstrate a FM modulator. It is a little wanting though.

If you wanted to use it as a transmitter well:

First of all it does not transmit at a very usable frequency, as in finding a cheap receiver that can be used to validate if it works will be difficult.

It would need a rather unwieldy antenna (for a class room/ lab demo; about 156 meters long for a 1/4 wave diapole).

I could be wrong, but I'm pretty sure it would not be legal to use as a transmitter, as it is right now. Wrong frequency band and lots of extra noise (from the overtones that you get with a square wave).

That being said, if you added a LC filter network (google: Butterworth filter), tuned to an overtone, in the 88-108 range, added an output amplifier and antenna; it might work.

Square waves (like what a 555 IC generates) are composed of a series of odd harmonic sine waves, of the fundamental frequency. So with a good filter and antenna, to remove the junk, you could get a nice-ish FM modulated sign wave out. Which (big sh-maybe) be able to be picked up by a FM radio sitting right next to the '555 transmitter'.

It would be horribly inefficient, but may demonstrate a basic working FM modulator; in a high school lab setting.

Well, it may be not be feasible in practice but a frequency multiplier may be of help. It can be used to increase the frequency by a factor as output frequency is proportional to a harmonic of input frequency and then use a BPF to eliminate unwanted distortion and harmonics. In your case, doing some math, you need a frequency multiplier of factor around 200. It was generally used in frequency modulation circuits and in communication circuits and was operated on signals in microwave range. The best device in case of frequency multiplier is PLL(phase locked loop). But the disadvantage is that it make use of non-linear devices for which the signal may be prone to non-linear distortion or variation. Alternatively, you can use a frequency mixer to generate two frequency components 'f1+f2' and 'f1-f2' but this method may still be inadequate to reach in the MHz range.

So, as other answerer has noted that 555 is not capable to reach the radio band frequency and is not used in radio design, you should accept that 555 as FM modulator is solely for academic purpose only.

Not the answer you're looking for? Browse other questions tagged 555 radio or ask your own question.

0
Increasing Frequency of a Signal