How to determine the best resistance for a weak signal Twin-T notch filter?

I am designing a 50/60 Hz Twin-T notch filter for a weak (biomedical) signal output from an instrument amplifier (InAmp) to be chained to another active low pass filter. The input frequency range is between 0.1 Hz to ~200 Hz. 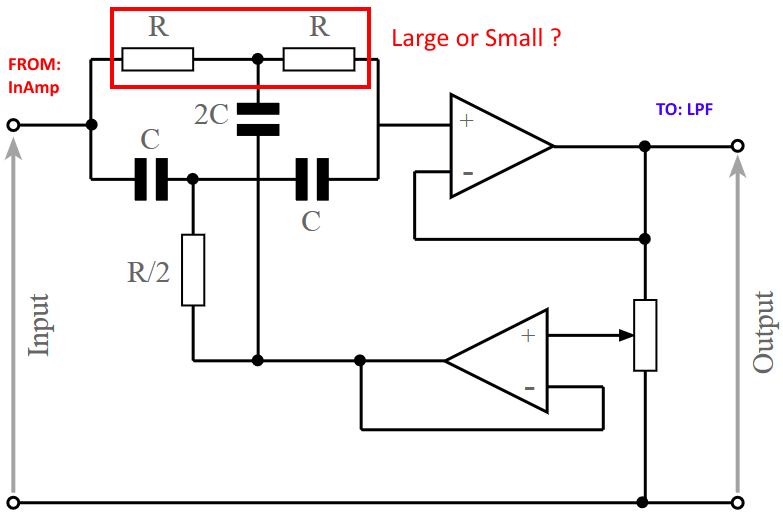 I'm getting a quite confused about how these values are best chosen.

On the one hand:

On the other hand:

As you can see, my mind is already clipping long before my signals do.

How can I sort this out to better understand what values for R (or C) to use?

So far it seem that the best choice is trying to keep R as small as possible within reason, probably within 100 kΩ ≤ R < 1 MΩ. This will have the following consequences:

1) The circuit itself won't "draw less current" from the supply, but it will draw less (or more) from the In-Amp; which will ultimately get that from its supply. There IS an obvious current sink : the low output impedance of the feedback buffer. This amplifier, too, is powered from the supply. However, why are you concerned about the supply current? What are your constraints here?

For noise analysis, treat that current sink - buffer output - as ground, or more accurately, as a noise voltage source (determined by the amplifier, and its source impedance) in series with ground.

2) Between an in-amp (low Z output) and opamp input (high Z input) there isn't any impedance matching to worry about. If you are responsible for the in-amp stage, it's worth knowing the source impedance of the sensor, to design a front end (InAmp) with appropriate noise impedance, but given the question, that's a SEP (Somebody Else's Problem).

3) High values of close tolerance caps (usually metal foil or metal film caps) can be expensive but I'll assume your budget runs to 10 uF or so (which also tend to be physically large) giving a lower bound on your resistance at 318 ohms.

4) Yes; thermal noise may be a major problem. Reducing R helps (adding cost to C, see 3) but don't go overboard. If the noise in this stage is 10dB lower than the source noise * front end gain, it will only add 1 dB to the overall noise figure. You know that context; we don't; but there isn't much point going below that 1dB noise figure.

5) A capacitor isn't a thermal noise source. A resistor works via collisions between electrons and the atoms within the resistance; the statistics of those collisions are the noise source. There is no similar noise mechanism in a capacitor.

However, whenever a current divides between two alternative paths, each electron takes one path or the other, the statistics of this giving partition noise. Noise is proportional to sqrt(current) so signal/noise also improves as sqrt(current) (assuming the current is all signal, no DC bias)

6) While some resistors may be 1/F noise sources (carbon composition?) you can use metal film instead. The amplifiers (in-amp and buffers) are 1/F noise sources. Compare their specs with your requirements. (Note that at these low bandwidths, there are chopper stabilised amplifiers that move the "1/F" noise out to their chop frequency, which may be 200kHz and well outside your band of interest)

Not the answer you're looking for? Browse other questions tagged circuit-design filter impedance cutoff-frequency or ask your own question.

3
Why use an opamp for the variable Q feedback in a Twin-T notch filter?