Calculating base-emitter current of a BJT, with emitter connected to ground (no resistor) 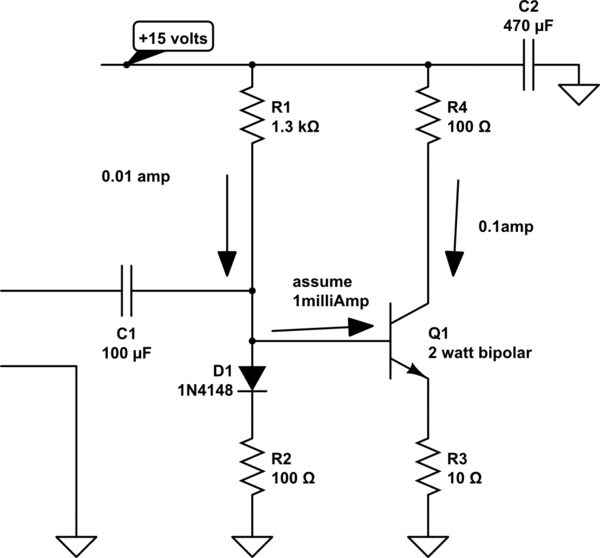 Much like the circuit above, most BJT amplifiers use an emitter degeneration resistor to stabilise the bias. It's relatively straightforward to calculate the base and collector quiescent currents. I have been looking at schematics, where a diode provides a voltage on the base of an NPN.

But, is there a rule of thumb to calculate the base-emitter current when no emitter resistor is used? I've been going through the equations for the intrinsic emitter and base resistances, (\$r_e = 26mV / I_E\$), etc, but can't seem to find an answer. The internal emitter resistance seems to be a function of the emitter current. Would you just use the Ebers-Moll equation?

But, is there a rule of thumb to calculate the base-emitter current when no emitter resistor is used?

Yes, indeed it is the (diode/ Shockley) equation that you show:

From that you should conclude that \$I_E\$ is extremely dependent on the voltage \$V_{BE}\$ and temperature \$T\$. Besides that the \$I_S\$ is also extremely variable, it is also temperature dependent and varies per transistor. Only two identical transistors that are for example on the same die (chip) will have a similar \$I_S\$.

So if you'd apply a constant \$V_{BE}\$ voltage, you would get a biasing current that will vary a lot over temperature and the actual transistor you're using (swap the transistor and you could get a significantly different current).

So that makes it very impractical to bias a transistor with a constant \$V_{BE}\$.

That's why there is a diode (D1) in your circuit, as it behaves in a similar way to the Base-Emitter diode in Q1, it somewhat compensates for these variations making the circuit more stable. However without the emitter resistor it would still not be stable enough.

The emitter resistor makes the base-voltage to emitter (or collector) current transfer much more linear (as opposed to exponential) and also much less temperature dependent.

You will usually only find "no emitter resistor" biasing in circuits inside chips as there the transistors are nearly identical and will have nearly the same temperature.

And even on a chip I (yes, I design analog circuits on chips) usually add a small emitter resistor anyway to improve the behavior. Only when there is no voltage headroom and the situation allows it would I use an NPN current mirror without an emitter resistor.

Here is a circuit that lets you dial up what current you want, as long as you known the approximate BETA. 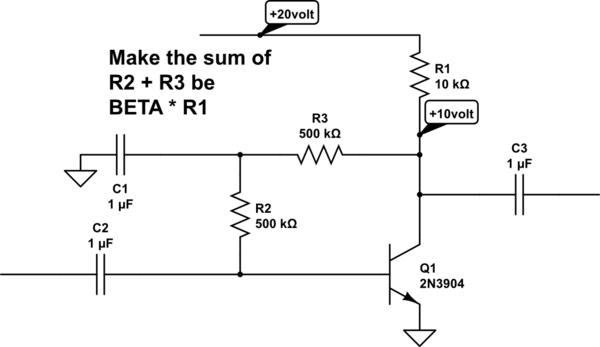 10
Why is a BJT considered "current-controlled"?
0
What do we mean when we say a transistor amplifies current?

5
AoE3: Grounded Emitter Amplifier Distortion
4
Is the current gain value constant for a single BJT ?
2
Transistor Differential Amplifier Non-linearity
5
How to derive the precise gain of an NPN common emitter amplifier without emitter degeneration?
0
(Lack of) Miller Effect in Cascode considering Common Emitter and Common Base Seperately
1
Why does a rise in ambient temperature cause a base-voltage-biased grounded emitter stage to saturate?
1
Biasing of CE amplifier with emitter resistor for specific gain
0
Help with a multistage NPN BJT audio amplifier
2
Differential pair biasing by current sources
0
When to simplify the BJT model