CRT Oscilloscope - part of the plot is missing

I picked up an old METRIX OX 720 oscilloscope. I replaced 2 capacitors that went up in smoke.

Once restarted, here is the signal I get. 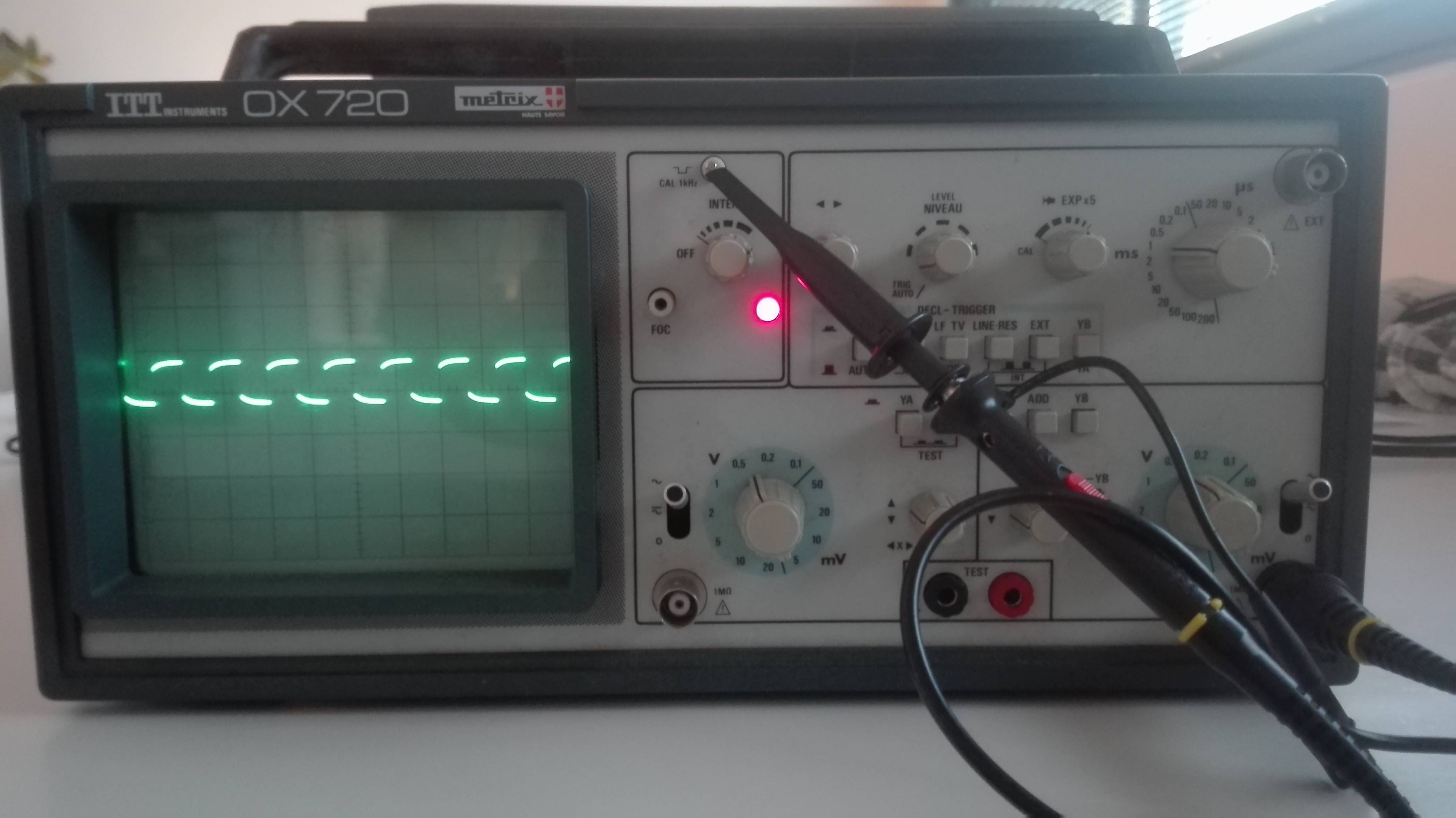 The vertical part of the signal is missing. It is the same for both channels.

Do you have an idea of the origin of the problem?

Is the quality of the probe responsible for the poor quality of the display? Or is it the oscilloscope that has a display problem, in which case is it good for the case? 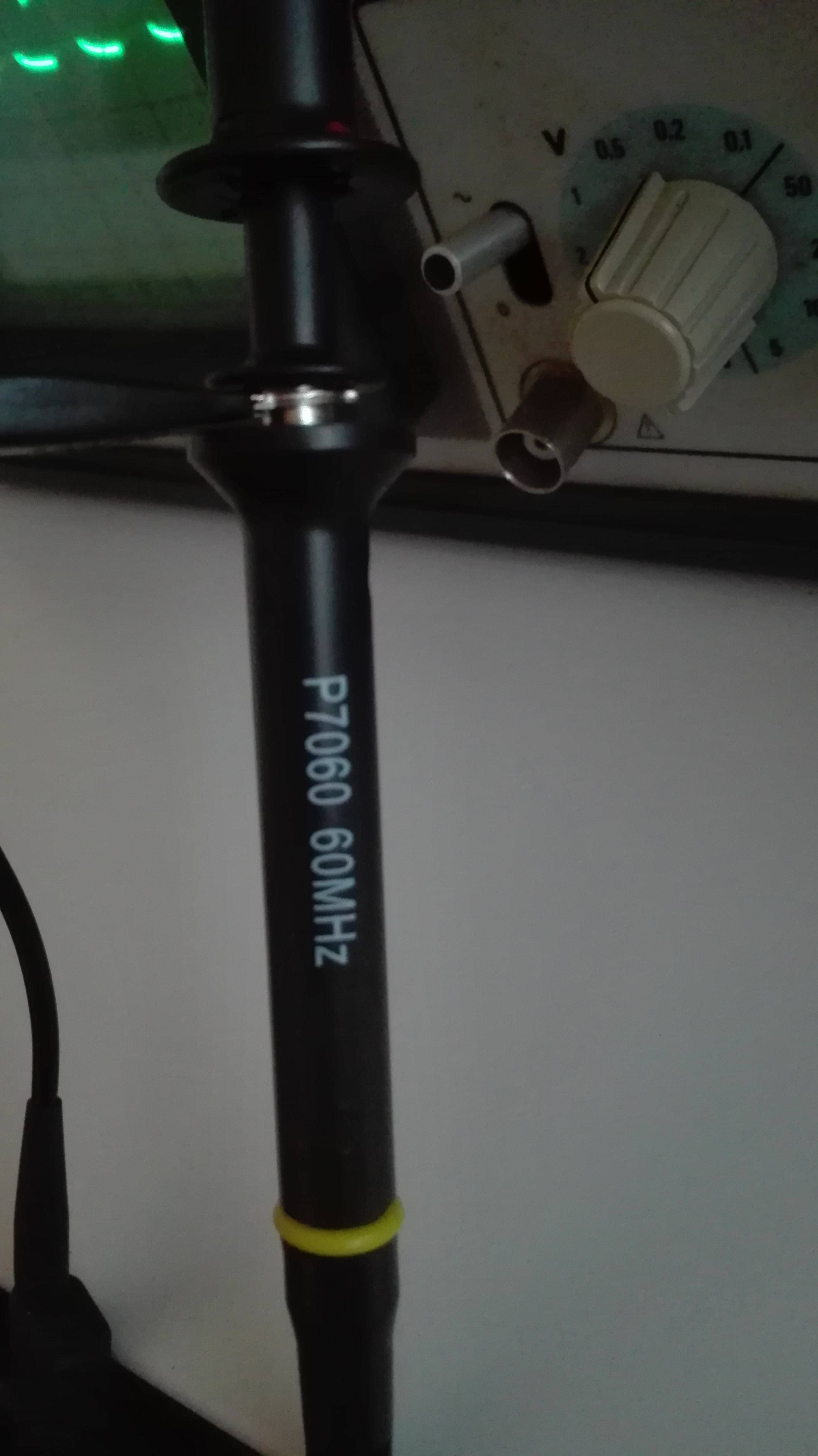 I have modified the sweep rate time and fully increase the brightness but nothing changed. 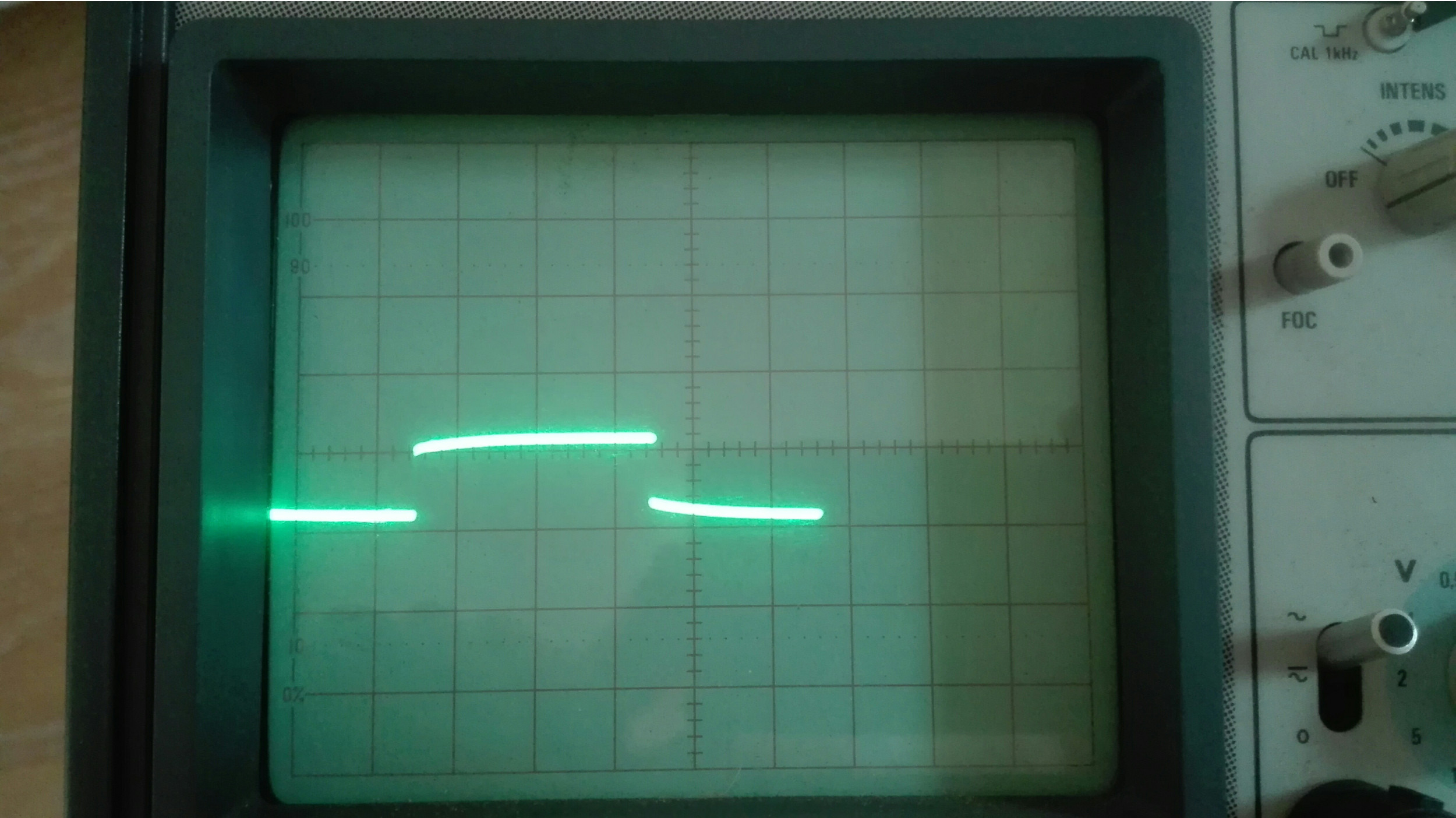 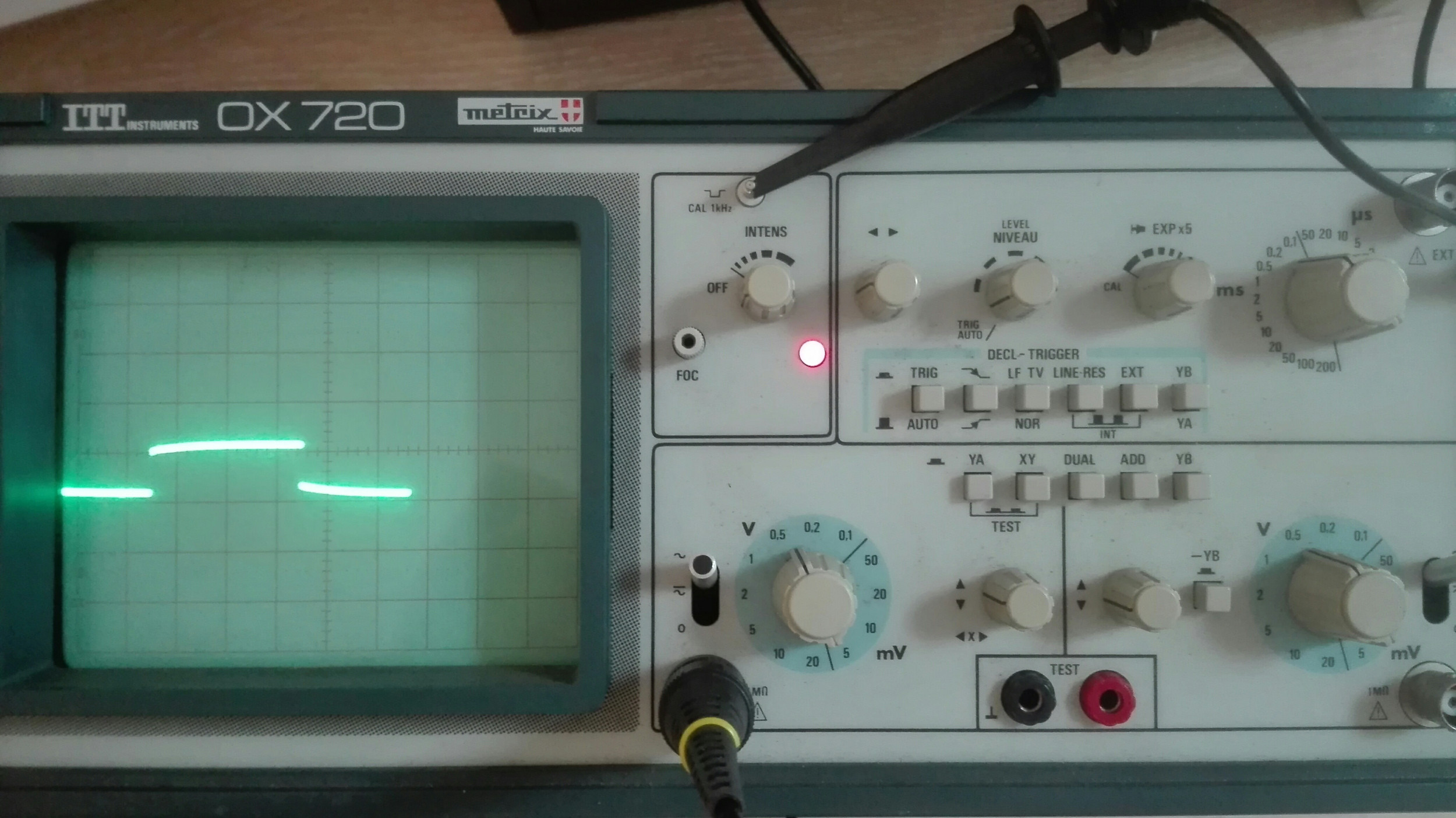 The trace is perfectly fine.

On CRT oscilloscopes, the brightness of the trace depends (partly) on how fast the electron beam moves across the screen.

The horizontal speed is set by the sweep time. A faster sweep is darker than a slow sweep. Try it out.

Where it gets interesting is when the signal has a fast rise time. In those cases (like your test signal with sharp edges) the electron beam can move so fast that the vertical part of the trace is noticeably darker than the horizontal part.

You could crank up the brightness and see if the vertical part becomes more visible. You'll probably find the horizontal part much too bright if you do that, though.

This is a useful side effect of the way CRTs work. It gives you a visible indication of the rise time of sharp edged signals.

You can't measure the rise time that way, but you can certainly see the difference between a fast signal and a slow one.

As a comparison, here's a couple of pictures of my ancient Telequipment D43:

This is a 1kHz square wave at 1 millisecond per centimeter: 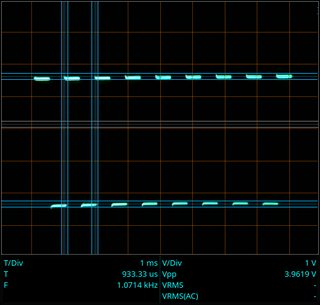 The rise time and sweep time are so far apart that you can't see them simultaneously.

This is a 30kHz square wave at 5 microseconds per centimeter: 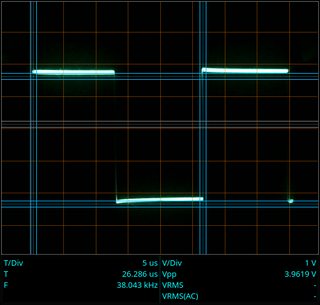 As the rise time and sweep time are closer together, you can actually see the (faint) vertical lines.

From your scope picture, I see that you need to adjust the compensation on your scope probe.

The test signal output from your scope is a nice, sharp square wave.

Turn the adjustment screw in the probe until the trace shows a nice, sharp square wave. Since the "legs" are invisible, adjust the probe until the horizontal lines are flat. Turn it back and forth, and see what it looks like at the extremes. Now adjust it to have the most reasonable flat lines you can get. 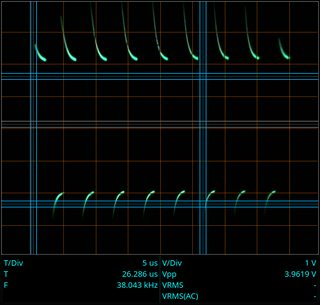 Almost as bad in the other direction: 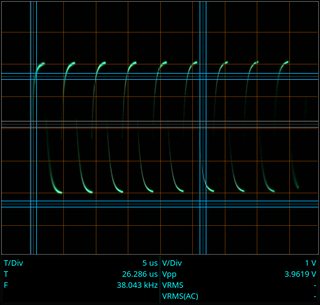 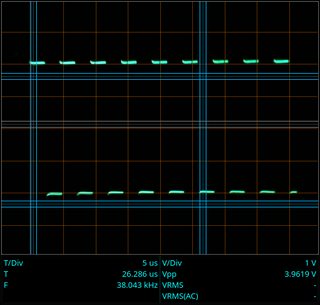 No, nothing is missing.

If you turn up the sweep rate of the timebase you can probably see the rise/fall time of the low vs high transitions of the calibration signal. Turning up the intensity may also make it visible.

Looks like you could also use to adjust the compensation on your probes.

The rise time of a fast square wave signal observed through a 60 MHz probe should be around 5 nanoseconds. This is too fast to be clearly visible with your current time base (1 ms/div?).

Set your time base to 5-20ns/div, and you will see the missing part of your signal.

What makes you think there should be a vertical part?

The vertical parts show the voltage. So let's say your top level is 1V, and bottom level is -1V, you will only see a vertical line if there is an input signal with a voltage between 1V and -1V (and long enough to be visibly plotted).

If the voltage switches from 1V to -1V (nearly) immediately, there is no reason for the vertical space between the horizontal lines to be lit.

Look very closely at the rising edge of your third photograph, and you can faintly see the vertical trace. Since the width of the square wave is not perfectly stable, you can't see the falling edge.

Digital scopes take a series of measurements, then draw lines between them, which allows you to see rising and falling edges.

Analog scopes, on the other hand, actually move an electron beam as the signal voltage changes, and the faster the beam moves across the phosphor, the dimmer the spot is. For good square waves, the rise and fall times are so short that the verticals are very dim. As is the case in your pictures.