Power factor and cos φ

I am confused about the difference between "power factor" and "cos φ".

As far as I know, those two quantities are equal when we have ideal sinusoidal current.

Please help me, as I cannot continue my education without understanding.

Also I will be very happy if you can give me a link to some textbook, in which these topics are covered in more detail.

The power factor is the ratio between real power and apparent power. It is a generalization of the concept of cos φ. In case of a sinusoidal current, the power factor is just plain cos φ, but in case of non-linear current consumption (which is typical for phase-angle control and rectifiers, so a whole lot of electronic devices today), the power factor is affected by the current waveform as well.

Power grid operators prefer power factors close to one, because power is (by residential households) paid for real power, whereas the energy losses in distribution depend mostly on apparent power, so power factor compensation, the act of getting the power factor close to unity, is a great deal.

In the case of phase shift, the power factor can be brought to nearly one by just adding a parallel inductor or capacitor to the load, so that their reactive powers cancel out and just the true power remains as apparent power.

Power factor (PF) is defined as: \$\dfrac{\text{RealPower}}{\text{ApparentPower}}\$ where ApparentPower is simply the RMS voltage multiplied by the RMS current. 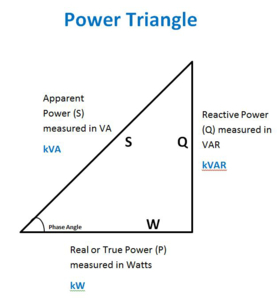 Where \$\varphi\$ is the phase difference between the voltage and current.

There is more information on calculation here on Wikipedia

Best way to understand this is to think of Power Triangle.

Because true power and apparent power form the adjacent and hypotenuse sides of a right triangle, respectively, the power factor ratio is also equal to the cosine of that phase angle.

Power Factor of 1 implies that all power is utilized and there is no reactive power. This can be seen by realizing simple values:

0
What are the exact meanings of reactive and apparent powers? Do we say they are supplied or consumed?