How does a NAND gate work? (Very basic question)

I'll preface this question by saying that I am a software developer just starting to learn the basics of electronics, so it's very likely I'm missing some fundamental intuition here.

Below is a mechanical NAND gate with two switches. I think it's supposed to be obvious that when the switches are closed, the output Q is 0 rather than 1. I don't see why this is.

The intuition I'm using (which may be totally wrong) is this:

Please help me understand what I'm missing! And if you can point me to a book or online resource explaining these fundamentals, that would be very helpful. I've tried looking at a lot of "circuit tutorial" content on Google, but surprisingly haven't been able to resolve my confusion here. 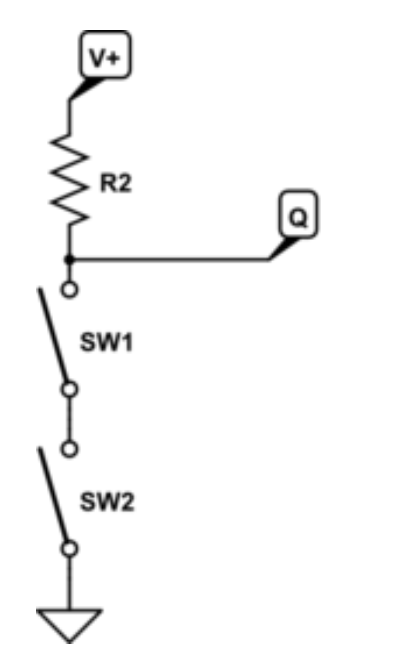 The boolean equivalent of a 1 is that current is flowing through a point.

That's the fundamental confusion leading to difficulty in understanding the circuit.

Single ended logic like this encodes state as voltage not current.

Inputs of logic gates are designed to source or sink very little current, so the output of the previous stage is easily able to impose its intended voltage on the connection between output and the following input with very little current needing to flow.

Current-mode signaling does exist, but it's generally used only in noisy situations, for example the time-tested 4-20 mA current loop standard.

First off the "N" means that it inverts the input the schematic is sort of doing the same but it gets off track of how the gates work. If you drew it with a relay it would make more sense 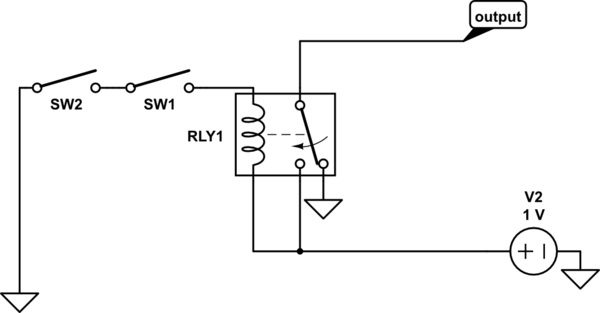 You need to study pull down and pull up resistors, the value of the resistor limits the voltage, current is not an issue really because this is all at "logic level". I had a hard time with the logic stuff at first and then all of a sudden it all made sense, good luck my friend.

I also had this problem since I started learning a bit about electronics (I'm also a software engineer).

Electricity always wants to balance. If there is GND, all electricity will flow to there (actually the electrons move in reverse direction but let's ignore that for now).

This means if the switches are closed, and if Q > 0 V, all electricity will flow to GND, meaning Q will be 0 V in a very short time (read: almost instantly).

However, when one of the switches is open, the voltage from V+ will flow to Q if Q has less voltage than V+ (which is likely so), so Q will end up having the same voltage as V+.

It is indeed a basic question but I think it is a very valid one. I am an electrical engineer and agree that it seems that the logic is broken but read on and you'll see how easy it is.

As it was answered before, electronic logic gates are named for its voltage behavior, but that's the easy part. Whenever both SW1 and SW2 are pressed (i.e. its value is "1"), the voltage in the point Q is "0". We can translate it to using logic gate symbols. 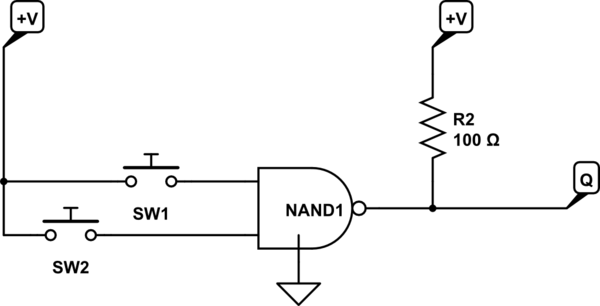 Now comes the not complicated but rather confusing part. Suppose you have the following circuit: 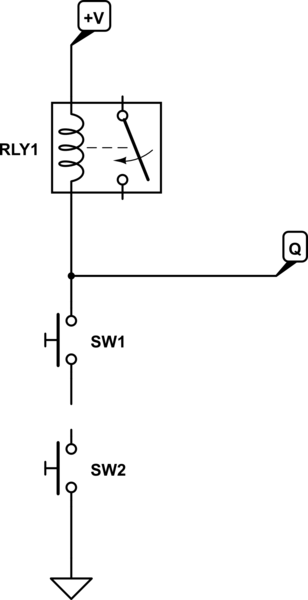 I'm sure you will say that's definitively an AND. But let's keep in mind the fact that the point Q voltage drops to 0 when both buttons are pressed and let's translate the circuit to using logic gates. 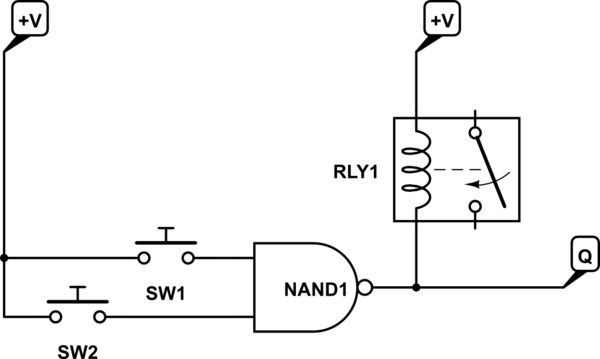 Now, you will see that the relay will turn on only when the point Q voltage drops to zero (i.e. when both buttons are pressed.) So, think it this way; if you were going to do your own physical implementation of this circuit with logic gates, you would have to buy a NAND. Now you have a Wired AND despite the fact that you are actually using a NAND gate. So don't worry, your computational logic is safe.

I found very useful the simple description of a NAND gate to act thusly "any zero in causes a one out". This circuit will do that.

In this circuit, if either switch is pressed, which causes a ZERO volts input to the inverter, then a logic HIGH appears out of the circuit.

Note we mixed logic 1 and logic HIGH and VDD and TRUE, along with logic 0 and FALSE and GROUND and logic LOW. 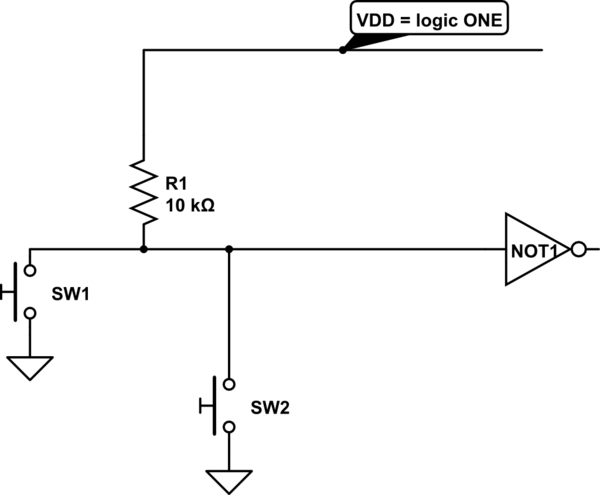 Not the answer you're looking for? Browse other questions tagged circuit-analysis logic-gates or ask your own question.

4
Why doesn't current flow through the common part of a circuit?
0
What is the voltage of Vo in this circuit without a closed loop?
0
How does the OR gate work?
0
If there is a branch and the two paths lead back to the same ground, will they both recieve power?
3
How does a Miller cap physically create a pole in circuits?
7
How does current flow in this path when all points are at the same potential?
3
Why doesn't electricty flow to earth ground when I connect my oscilloscope ground clip to a floating circuit?
1
LED current at output of AND gate
0
Understanding flow of current from diagram using AND gate