What is the difference between input and output offset voltage for an opamp?

Looking at many OpAmp (and InAmp) datasheets, I find the info either confusing or lacking. For example, in one datasheet they just call something Offset Voltage where in others they have two, separated as input and output offset voltages, respectively.

I must apologize from not paying full enough attention to the entire datasheets. The tricky part is that sometimes the data, as stated, are put under a header (a page above) as input), whereas when written in the summary, the offset is to be understood as input offset. However, occasionally the output offset is omitted. Either way I appreciate knowing the difference between the two terms.

Input offset voltage is the voltage source that would be connected to an input of an ideal op-amp to model the behavior of real op-amp.

You can also think of it as the voltage (assumed that both inputs are within the operating ("common mode") range of the chip) that must be applied differentially to cause the output voltage to go to 0V (bipolar supplies) or perhaps midway between Vdd and GND (single supply). AD defines it thusly in the below-linked paper, but it's not inclusive enough for my liking:

Offset Voltage: The differential voltage which must be applied to the input of an op amp to produce zero output

It's a bit hazy what the output voltage condition is (you can think of this as the "output offset"), and open-loop gain is so high that it usually doesn't matter. For example, a precision amplifier might have an open loop gain of 10^6 so a few volts at the output represents a few uV at the input. AD skirts the issue by assuming bipolar supplies. You can certainly test a single supply 3V op-amp by applying +/-1.5V supplies which matches my definition.

Here is one way in the real world to measure input offset voltage, as described in this paper from Analog Devices: 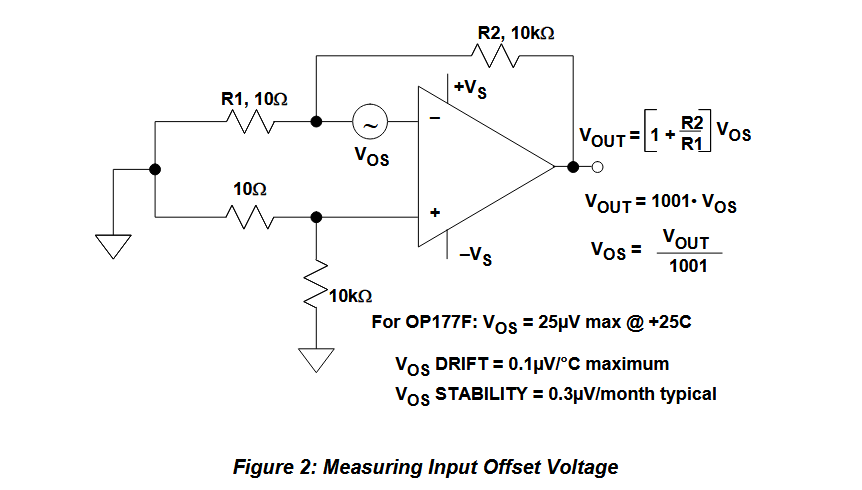 R1 and R2 are chosen to give high gain (but much lower than the open-loop gain) and there is a mirrored pair on the non-inverting input to null out input offset current. R1 is chosen to be very low value to minimize the effects of input bias current. The gain is chosen so that the output will not saturate even for maximum specified input offset voltage and also such that the open loop gain will not unduly affect the accuracy. A 25uV Vos results in an output voltage of about 25mV in this case.

With, say +/-10V supplies, and an op-amp that can swing within 2V of the supplies, this circuit will work with offset voltages of up to +/-8mV, which covers most op-amps. A +/-200nA input offset current will result in an error of +/-2uV in the Vos reading. Most modern op-amps with such a high bias/offset current are bipolar low noise types that run the input transistors at relatively high current, and do not have particularly low Vos, so it's not much of a concern usually.

Here is another method that is somewhat similar but assumes lower input bias currents (potentially more error) and drives the output to zero (via the integrator formed by the auxilliary amplifier) almost exactly (potentially less error due to finite gain of the Device Under Test) Vos is approximately 1/1000 of the voltage at TP1:

There is an analogous situation in the measurement of noise where we measure the noise at the output of an amplifier but divide by the gain of the particular circuit in order to determine the input-referred noise.

If you had a circuit different from a typical op-amp in that the open-loop gain was relatively low, the output offset might not be as well predicted by multiplying a fixed input-referred offset by some variable gain number and you would need two numbers to be specified.

Input offset voltage (Vio) - Voltage across the op amp's inputs that will force the output voltage to be 0V.

Output offset voltage (Voo) - The output voltage of the op-amp when the input terminals are grounded.

These are very different, and output offset voltage is not particularly useful except maybe in certain extremely niche applications. I am using such vague language because I actually cannot think of a usage case where knowing the output offset voltage would be useful, but if you've seen it in a datasheet, maybe it is. Or maybe it was included just in case.

Just to be clear, the output offset is not the output voltage of the op amp when an op amp set up for unity gain has no voltage across its input. This is simply going to be the input offset voltage, just appearing on the output.

The output offset voltage is specifically both inputs grounded, no feedback present. Like this:

Note: Typically this is measured with some kind of specified load resistor, which I've omitted for clarity.

The only possible application I can think of off hand might be for how the op amp behaves under certain fault conditions. If anyone has any other ideas, I'd love to hear it in the comments.

Not the answer you're looking for? Browse other questions tagged operational-amplifier instrumentation-amplifier offset or ask your own question.

1
How to compute DC offset of analog circuit?