Is the capacitor placed correctly in the schematic?

I am new to electronics so any form of advise will be helpful.

While trying to build a line-following robot by studying the circuit schematic(as attached), I wanted to find out what the capacitor C1 and C2 are doing.

1) From my beginner's understanding, I am guessing that C1 and C2 each function as a Bypass Capacitor, responsible for ensuring steady current flow to the LED diode so it doesn't flickers(due to the voltage ripple caused by the motors) as the LED diode is used with the photo-resistor sensor for calibration.

2) Also in the same circuit, there is also no capacitors connected directly to the power source and ground, thus I believe the circuit designer have left out dampening any possible voltage ripple(caused by the inductance of the motor and many other factors) for the whole circuit. Or maybe it's just not significant to regulate the voltage for the whole of this circuit.

Please help verify if my understanding above is correct. it will help me progress big time. Many thanks in advance! 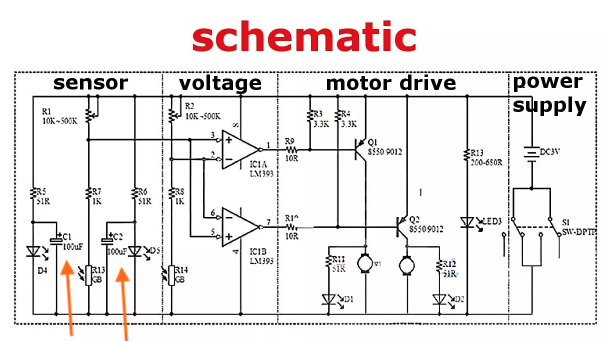 Where did the diagram come from - supplied or traced out by you or others?

S1 connections are incorrectly shown - this raises questions about the accuracy of the rest of the circuit. As shown, S1 operating or releasing creates a short break in the supply voltage while the switch transits between states. It is vanishingly unlikely that this is what is intended. It may just be meant to be an in/off SPST but drawn wrong.

Brief: If noise from the motors modulates the LEDs then the illumination of the white-line(s) will vary and the motors will be influenced. Adding capacitors across the LEDs is an attempt to minimise the noise effect on motor drive - quite possibly the need was empirically determined when the system worked worse with them absent.

D1 and D5 provide illumination for a white line (possible one each side or two lines or with a middle position shield, and vehicle steering is controlled by varying the illumination of R13 and R14.

ICA1 & B are comparators which are both fed with signals proportional to the illumination of the two sensors BUT with opposite sense.

In an ideal and unachievable state, When the vehicle is running 'straight and true' both sensors are equally illuminated. This state would result in indeterminate comparator switching and the vehicle would "jitter" around the mid point.

SO - what are the capacitors for?:

The Robot is battery powered and can be expected to produce a significant amount of noise on the supply rail. It will benefit from the addition of significant capacitance on the rail - 100 uF minimum and 1000 uF+ would not go astray.

Steering operation is critically dependant on R13 and R14 providing accurate estimates of the relative illumination of the track that they are monitoring. When running at close to equal, small signal variations in one direction will swing them across the threshold and toggle the motor drive outputs.
If noise from the motors modulates the LEDs then the illumination of the white-line(s) will vary and the motors will be influenced. Adding capacitors across the LEDs is an attempt to minimise the noise effect on motor drive - quite possibly the need was empirically determined when the system worked worse with them absent.

It functions like a low pass filter, with a time constant of 100uF*51=tau=0.00051s So it will filter out most noise with that is faster than roughly half a millisecond.

Bypass filters are mainly to solve a problem with line impedance to the load. The battery is a relatively low impedance source, so you may not see much noise. If the cables from the battery are short (and low resistance/inductance) then filter caps may not be needed. As a precaution most people include bypass capacitors without doing a load analysis (because properly analyzing a switching load can take more time=money than the capacitors are worth)

I wonder if the capacitors are being used to reduce noise. Nor as protection against voltage dips.

R13 and R14 seem to be a LDR or another light sensor.
If there was a need to filter noise, those sensors should have a (ceramic) capacitor parallel to them to shunt high frequent noise rather then the LED's. Now, the R13 and R14 are still susceptible to noise (high frequent motor noise, voltage dips, external light sources, etc).
Moreover, elco's are not effective against high frequent noise due to their ESL.

If they were to smooth voltage dips due to initial stall currents of the motors, the elcos should have been placed between the motor and the voltage block (maybe with a resistor to form a RC filter).

If R13 and R14 are indeed LDR's, I think the elco's are being used to generate some kind of initial time out/settling time. Maybe to compensate for the response time (which is several ms) of the LDR's??

I figured I should spend more time improving the design than criticizing it. I did not realize until my own investigation that this was for a 2 wheel racer robot.

The optics under-body are spaced at least the width of the track being followed, such that each emitter-detector gets only 1/2 the maximum amplitude on the middle of the track. Test this separately. Thus only half the light is reflected on each edge as the optics track each edge for steering error.

When both pots are too high in value, the optics are too sensitive and the FETs are both ON too much, causing slack in the steering, resulting in unstable driving left-right.

If the pots are too small in value reducing sensitivity may cause only 1 motor being on at a time with a dead spot in between with neither motor on. So the optics design and pot settings are critical. Whereas the Arduino based one can calibrate itself going in a circle at first to adjust the gain which is like adjust both pots at the same time and offset which is the difference.

I chose 2 Yellow LEDs since these would be around 2.1V with good LEDs e.g. 5 Cd 60deg intensity pointed to refect into sensors.

3.1V Blue might look nice but when the battery drops in voltage so does the optical Gain and it may result in a deadspot with low gain. So I though an improvement would be regulate the current.

The CC sink can be reduced in current by raising the Current sense = 15 R if the LED intensity is too bright.

The power FET's will reduce transistor losses but must be rated for at least 10x the motor current to have low RdsOn. A reasonable value would be 10% of the motor DCR (resistance.) THe Vgs(th) is just the threshold of the FET (Vt) turning on < 0.5mA so it must be a "3V compatible logic Level FET". This usually means about Vgs(th)=1/3 of Vbat min. A clamp diode is necessary to prevent negative spikes when the FET's turn off and will also tend to coast more around corners depending on diode size. (T=L/R)

If the motor goes too fast with the gear ratio used, then a half bridge FET array works better as instead of coasting like Formula 1 it goes from full power to full brake for the duration needed to get a faster corner response. But if you have a slow motor wheel ratio, then coasting is better without the diode ( or LED) across the motor and use the avalanche Zener inside the FET to absorb the losses at lower current. 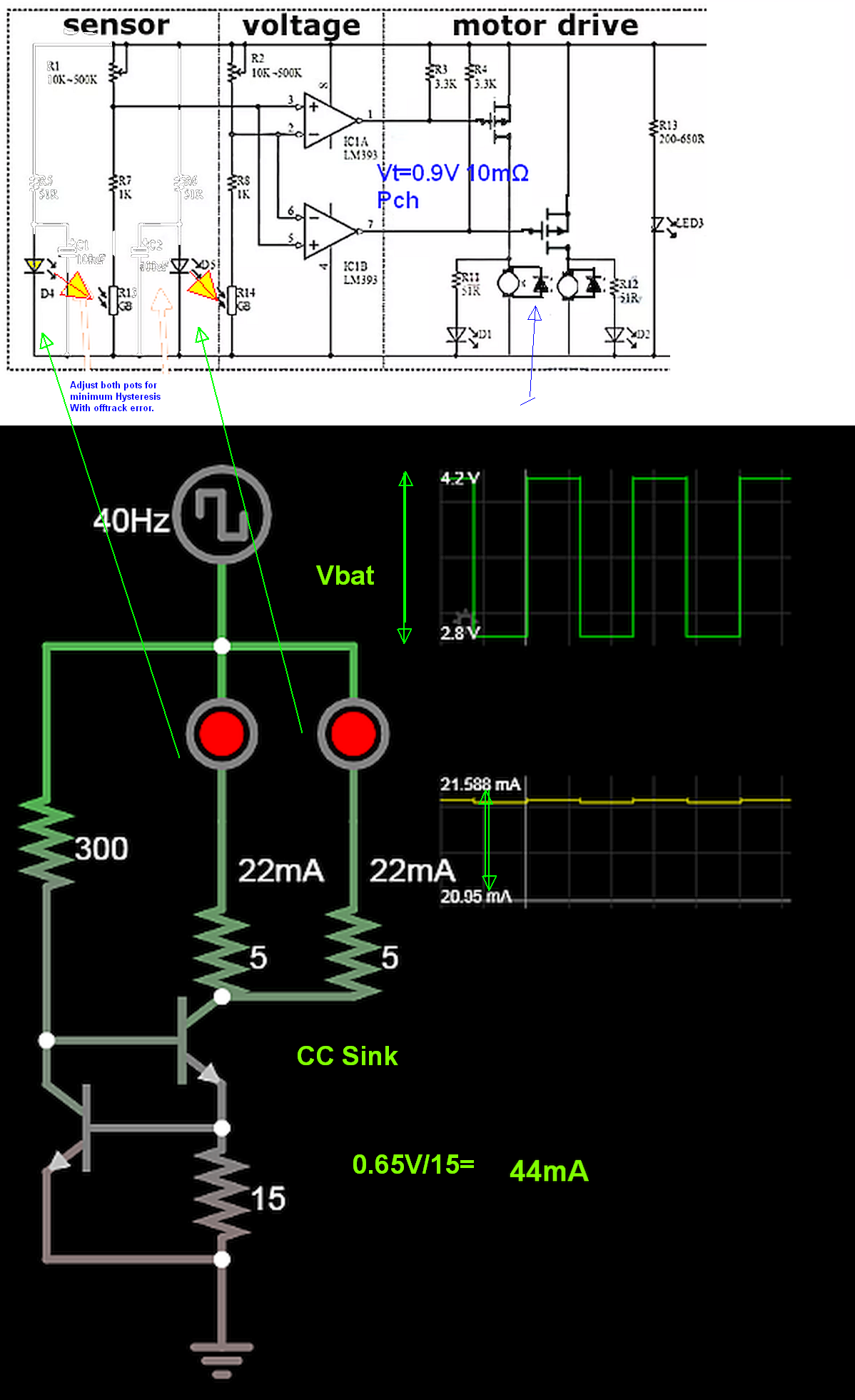 Not the answer you're looking for? Browse other questions tagged capacitor bypass-capacitor or ask your own question.