Why are oscilloscope input impedances so low?

My question is two-fold:

Where does the input impedance come from?

Why can't the input impedance be much higher?

I suppose one benefit of a precise standard \$1\mathrm{M\Omega}\$ is it allows 10X probes and the like, which would only work if the scope had a precise input impedance that wasn't unreasonably large (like that of a FET input stage). However, even if the scope had a really high input impedance (e.g., teraohms), it seems to me that you could still have 10X probes just by having a 10:1 voltage divider inside the probe itself, with the scope measuring across a \$1\mathrm{M\Omega}\$ resistor inside the probe. If it had an input impedance on the order of teraohms, this would seem to be feasible.

Am I misunderstanding the input circuitry of a scope? Is it more complicated than I'm making it out to be? What are your thoughts on this?

I would say a combination of a few factors.

To further explain point 3, at moderate frequencies (from a few kilohertz upwards) the 1 megohm DC resistance of the scope input is not the dominant factor in the overall input impedance. The dominant factor is the capacitance, with the cable making probably the largest contribution.

(in fact at UHF/microwave frequencies it's common to reduce the scope input impedance to 50 ohm, so the inductance in the cable can balance out the capacitance and the cable becomes a properly matched transmission line)

What this means is if high input impedances are desirable then it's much better to deal with that at the point of probing than at the scope. The typical compromise of cost/flexibility/input impedance for general use is an x10 passive probe.

If you need a really high DC resistance then the solution is to add a FET based amplifier in front of the scope, preferably as close to the point of measurement as possible.

A lot of things are the way they are because of history, and de facto standardisation.

A general purpose oscilloscope input is a difficult compromise between not loading the circuit, not being damaged by high voltage, having reasonably low noise, and being able to maintain a decent bandwidth.

1 MΩ in parallel with 15 pF to 30 pF satisfies a lot of people for a lot of applications. There's little incentive for manufacturers to build a general purpose oscilloscope with a different input, to address tiny parts of the market.

When you do need better noise, or a differential input, or a higher input impedance, then you use a custom pre-amp. When you need wider bandwidth, you switch to a 50 ohm input impedance.

There are special purpose oscilloscopes made at high prices that do address niche applications.

Actually, it is ridiculously high for a wideband input.

There is no practical connector or cable that actually has an impedance (from a transmission line view. Resistance, but for coaxial cablers, gold platers, and waveguide plumbers. RF dudes.) of 1 megaohms, leaving the input utterly mismatched - even worse, a 15-45pf capacitor across an 1 megaohm (transmission line impedance) input would mismatch it to oblivion.

The reason it is 1 megaohm is for supporting standard 10:1 probes, which you indeed need to not overload the kind of circuit carrying audio frequency signals at high impedance and with high DC offset (think audio vacuum tube circuits, the probe designs are from just that era).

However, once you are dealing with RF or fast digital circuitry, the parallel capacitance of the scope input (which you can't make too small, again because of probes, cables, connectors) will dominate ... and bring the actual input resistance of that input down to 5 to 10 kiloohms once you reach one megahertz, 500 to 1000 ohms once you reach 10 megahertz. Reach VHF (hint: ACMOS or F-TTL circuitry is VHF stuff even if you don't clock it at VHF) and you would be better off with a matched 50 Ohm input, since you could connect a (within reason) long 50 Ohm cable and still have a 50 Ohm input on the circuit end, instead of an even bigger capacitive burden.

With the conventional kind of probe and input, you will overload RF circuitry easily. RF optimized oscilloscopes tend to have inputs that can be switched to 50 Ohm input impedance (any oscilloscope input can, with a parallel/through terminator) - which is, interestingly, BETTER suited, since now you can use probes (eg Z0 probes or active FET probes) that actually can be made to present much higher effective input impedances at the probe point. Or just provide a reliable 50 Ohm connection to your circuit with any old RG58 cable.

Addendum, from a DC view, also about multimeters:

There are bench multimeters/voltmeters that have much, much higher DC input resistance (still, not much higher input impedance at RF). Using such a device will actually prove to be extremely confusing to the "average" user (it would certainly to someone working on house wiring, vehicles, machinery rather than component-level electronics projects): When the test leads are connected to nothing or to an open circuit, any capacitance in the test leads, input circuits etc will be charged by whatever electric field is nearby, leading to a display of completely random values rather than zero volts (try working with a 100GOhm input resistance bench multimeter, you will see just these effects in practice...).

Also, a device with an input resistance in the teraohms will need to be extremely rugged against static electricity, since it can NOT just inherently dissipate the charges of potentially thousands of volts easily found in the environment - and ESD protection circuitry that reliably does not introduce leakage resistances or even worse leakage current sinks that would compromise the high input resistance appears to be difficult to make...

Btw, in addition, most hand multimeters (not all bench ones do) use quite sophisticated tricks (eg using an ADC clock that has a relationship to the mains frequency of the region they are sold in) to filter mains hum out of the results, which would otherwise again lead to unstable and random results even at "low" 1MOhm or 10MOhm (compare an open circuit oscilloscope probe...however, on a DMM, there is much more potential for misinterpretation).

The reason for it being 1 MΩ rather than the much higher value a FET can achieve is that oscilloscopes originally used vacuum tubes. The maximum tube grid bias resistance was generally set at ~1 MΩ to minimize the effect of grid leakage current, which is typically in the region of 0.1 μA. By the time FETs became available the 1 MΩ standard was already well established.

Since a 10x probe is usually used (more to reduce probe capacitance than to increase resistance) this 'low' input resistance isn't usually a problem. If higher input resistance without attenuation is required then an 'active' probe can be used.

Most scopes have a compensated input attenuator to set the input signal to a voltage in the range of the input stage which will usually have the highest sensitivity of the scope.

If the measured impedance changes when the scope is powered it probably means that there are relays controlling the input attenuator that are not activated in the unpowered state.

Trimmers C107, C108 and C109 are used to adjust the input capacitance in lower sensitivity selections to be the same as in the high sensitivity setting. 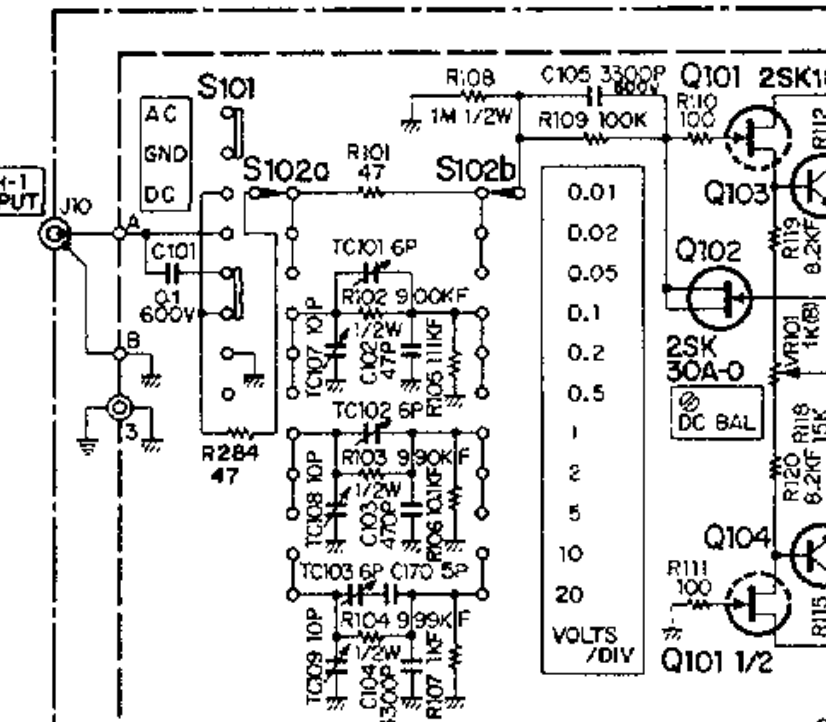 Not the answer you're looking for? Browse other questions tagged oscilloscope measurement probe input-impedance or ask your own question.