A 1.4 A shunt DC motor, with brushes, in a home made pottery wheel from 1970s runs slightly erratically.

In general I am well impressed with it as the motor choice is appropriate for the application, being low speed and even running under varying load. The speed controller circuit board is also home made but I think the fault may be simple to correct (not sure as I am amateur.)

In the attached circuit diagram there are two bridge rectifiers with connections "x and xx" to field windings and "A and AA" to armature.

The field winding rectifier is about 10mm diameter "S1-60" and the armature rectifier is grey square with 400 V printed on it. So this looks as if the circuit controls armature current, but would it be better if the winding current was controlled? If so can I swap the motor wires between rectifiers? Would the rectifiers still be appropriate?

33 kΩ resistor may be 22 kΩ, 0.1 μF components look like Mullard capacitors - I have not used symbol and value may be wrong. 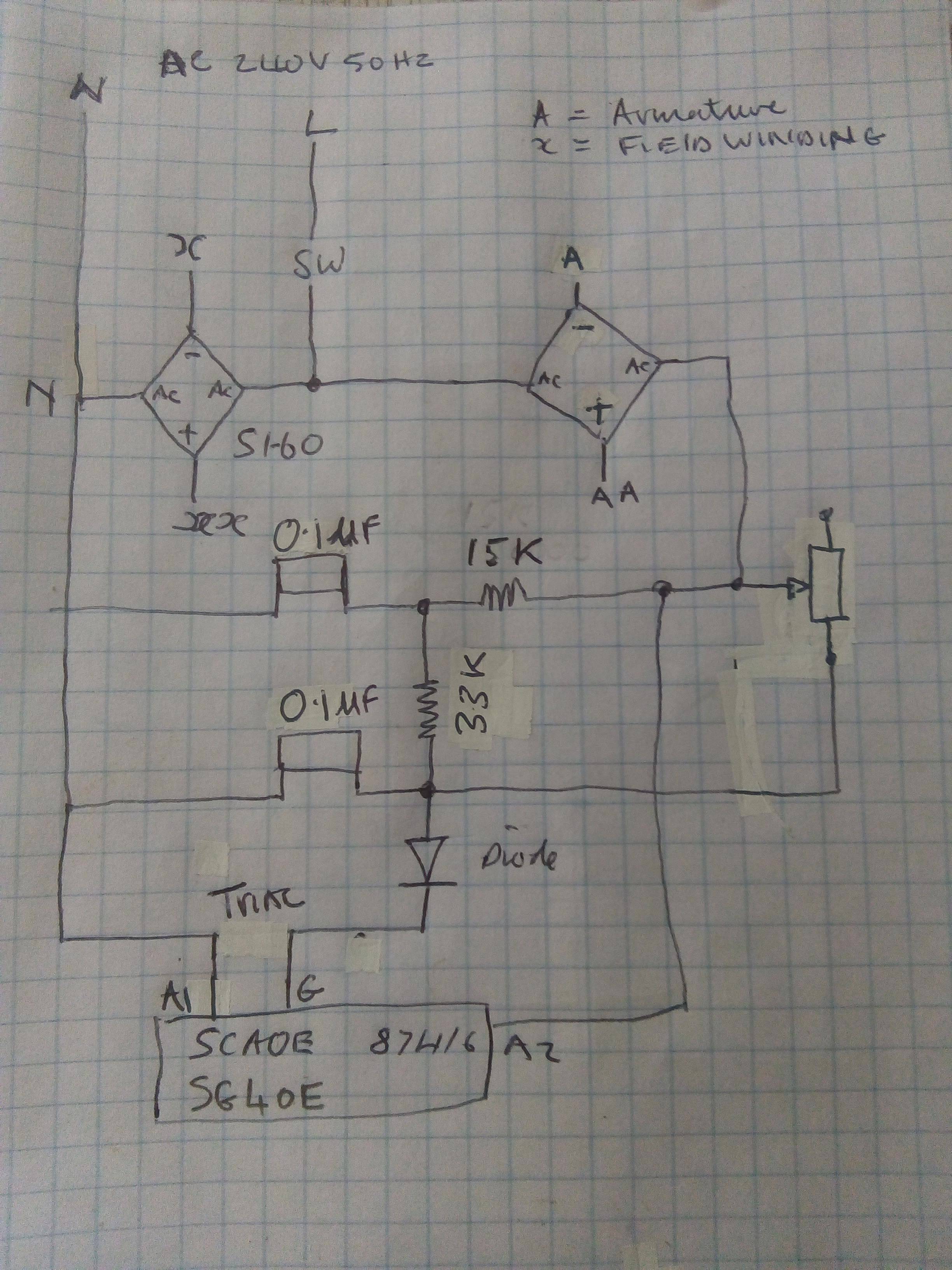 So this looks as if the circuit controls armature current?

would it be better if the winding current was controlled?

Controlling armature current with an outer voltage or speed control loop would be better, but more complex.

The above seem to be the only actual questions asked. The question seems to imply that you wish to improve the control scheme because the motor " runs slightly erratically." You have not actually described what aspect of motor performance is undesirable.

Speed decrease with increased load is normal for a simple armature voltage control.

Random speed variation with a steady load could be due to line voltage variation, other power quality issues, motor brush problems or a loose connection. Failure to start relably would like be a brush problem.

Not the answer you're looking for? Browse other questions tagged motor dc dc-motor speed brushed-dc-motor or ask your own question.

1
220VDC motor slow and jerking
2
Need help with 90vdc PM motor speed control circuit
0
What is the concept behind speed change in a constantly loaded DC series motor?
2
How to Wire a 120V Dryer Motor for Use in Other Projects?
0
small AC commutator motor issue
9
Why does my BLDC motor change behavior at high speed?
0
Field Flux control and Speed Of DC motor