What happens in real and how is it modelled when electric and magnetic fields couple to this simplified circuit?

I’m trying to make the question clear by simplifying a single ended circuit as a constant voltage source is coupled to a measuring device such as a scope or an ADC ac below: 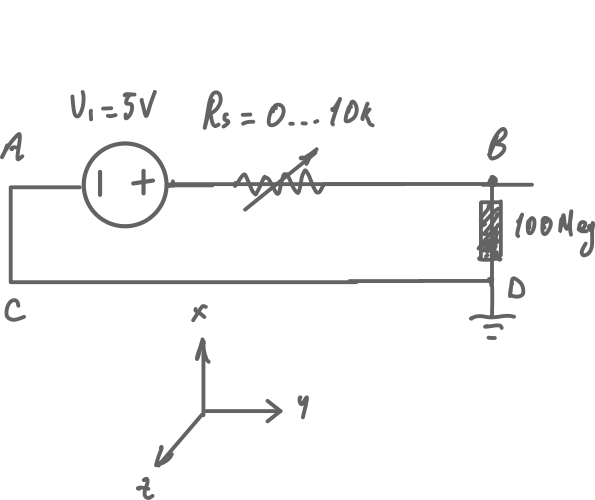 The source V1 above has an output resistance Rs we can vary. And the source is coupled to a measuring unit which has 100Meg input resistance. And as in the drawing the wires form a rectangle |ABDC|. I also draw x y z coordinates where x is horizontal axis of rectangle y is the vertical axis and z is the axis going out of screen which penetrates the rectangle loop.

Now It I assume there is 60Hz magnetic and electric fields around this circuit.

1- If we only focus on magnetic field’s effect on this can we say the following?

According to Faraday’s law, the varying magnetic field component through |ABDC| (along with z axis) will induce voltage across the loop. Can we say that the more Rs is increased the more the 60Hz noise will be observed at B? How can we model this coupling as a lumped circuit element? A series 60Hz voltage source?

2- If we only focus on electric field’s effect, regarding Maxwell equations what is the 60Hz electric field’s path which induces 60Hz displacement current through the circuit? Is it the electric field looping through |ABDC|? (x an y axis). And how is this type of coupling modelled? Will increasing Rs increase the 60Hz current?

electromagnetism
share|improve this question
asked May 5 '19 at 19:23

Here is two models for (1) magnetic coupling, and for (2) electric coupling.

(1) assume the source of the magnetic field is a long straight wire, in the plane of a rectangular loop; you will encounter lots of these topologies (a wire and a loop) in circuitry.

To compute the induced voltage, which we model as a source inserted into the loop, I use this formula (which ignores the Integral needed for accuracy when the wire is near the loop)

Notice the wire is NEAR the loop, thus this equation needs the Integral (Using natural log) for complete accuracy.

(2) I will provide example of Efield interference modeling, later in the day. 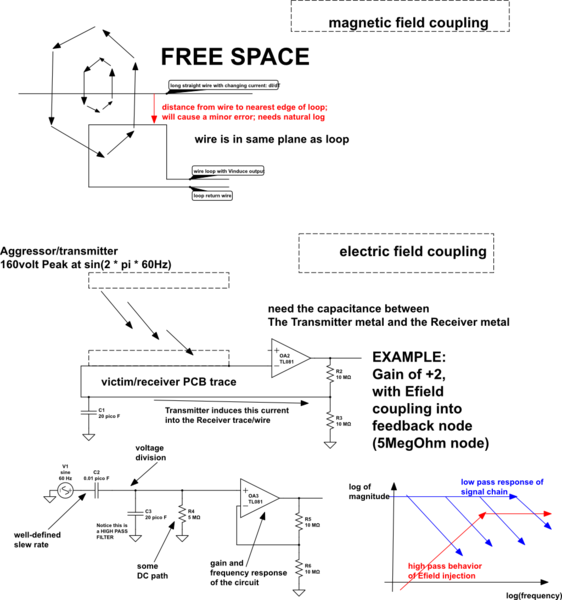 We need the capacitance between Transmitter and Receiver. To get started, pick the smaller area of the two, and use the parallel-plate capacitive model:

Suppose trace is 30mm by 2mm, and is 30mm from a 117VAC (160v peak) at 60Hz power wire, that has NO SPIKES ON THE POWER; if pure sin, we know the slew rate exactly; if power has motor spikes, assume 100X faster spikes; if next to MCU Dataline, assume 5 volts/1nanosecond dV/dt.

What is the capacitance, between Transmitter and Receiver?

That forms a voltage divider with the 20picoFarads I assumed the Receiver PCB trace to look like: metal over ground + ESD diodes of the OPAMP + FET gate capacitance of the OpAmp's diffpairs + capacitance of the 10MegOhm resistors. Thus 20 pF is a useful starting point.

Notice this is capacitive divider, just like a scope probe. We have

Unless the High_Pass_Filter dominates. Does it? What is the time constant of 20pF and 5MegOhms? 100 microSeconds, or 1,600Hertz HPF corner.

Notice we are assuming a CLEAN PURE SIN, no spikes, at 60Hz.

If the Transmitter has 10uS spikes, the HPF would have no effect.

And an MCU dataline, with 1nanoSecond edges, would ignore the HPF.

If the output of source V1 is loaded by so high resistance like 100Meg, the small Rs affects the loop almost nothing.

According to electrical model, I would simulate it as coupled inductors: 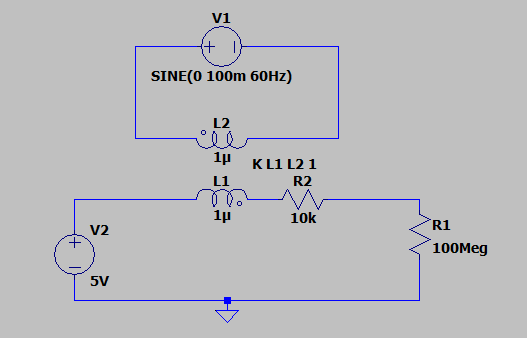 2) Its the electric field generated from probably power line wire, which has some little inductance.

Michal podmanicky is correct for the magnetic coupling. It appears as a voltage in series with the circuit. And the electric field coupling can be modeled as a current injecting into the signal wire. The magnetic coupling ( a series voltage) arises from some currents flowing around a loop somewhere. The electric coupling ( a current injected) arises from a changing voltage on some conductor somewhere.