Meaning of discontinuity in a diode circuit, analyzed using a simplified model for the diode

In our microelectronic circuits class we have been taught about the following simplified model for the diode,

where \$i_D\$ is the current on the diode, \$v_D\$ is the voltage across it and \$V_k\$ is its knee voltage (neglecting the breakdown effect). We usually use this model for quick pen and paper calculations, which our teacher sometimes doesn't do, however.
I was reviewing one (basic) circuit the other day, which is one of those for which the teacher didn't do all the calculations during the lecture. The LTSpice schematic of the circuit is the following: 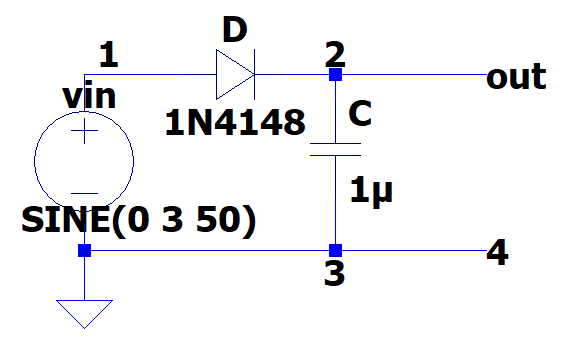 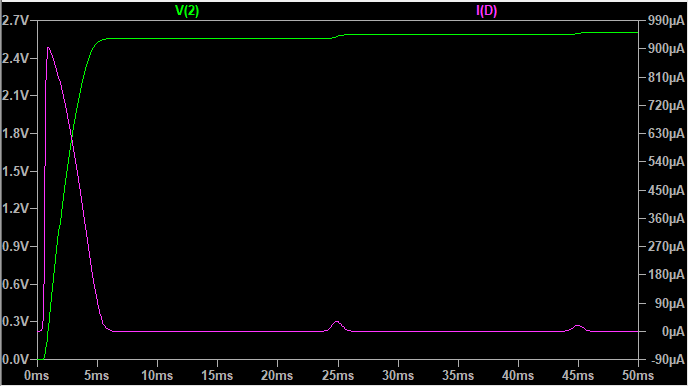 During the lecture, our teacher, who didn't do the calculation explicitly, asserted that, from time \$T/4\$ onward, the output voltage is constant because the capacitor cannot discharge, which is only approximately true: the diode appears to conduct a small (but of greater order than the saturation current of the diode) amount of current in certain instants. When looking at the simulation for the first time, I thought that this discrepancy was because we were using a simplified model.

However, by the direct calculation using the simplified model above, I found out that, for time instants \$t_h = T/4 + hT\$, where \$h > 0\$, the diode is not forward biased or reverse biased: if it was reverse biased, \$v_{out}(t_h)\$ would be equal to \$v_{out}({t_h}^-)\$, as its derivative would be constant. However, (2R) would not hold, as \$v_{out}({t_h}^-) = v_{in}(t_h) - V_k\$.
On the other hand, if (1F) were to be true, \$v_{out}\$ would have a maximum in \$t_h\$, thus making (2F) false.
Since the only discontinuity in the diode model happens when it switches on / off, I assumed this means that in \$t_h\$ it is switching on and then off (because after this instant the diode turns out to be reverse biased again). The simulation also confirms this. The question is: in cases such as this one, when using the simplified model above, I find some instants for which the diode appears not to be in any state, can I assume that it's in the middle of switching on/off? Or am I relying too much on a simplified model?
Thanks.

Yes you are relying too much on the simple model.

This corresponds to a forward current of approx 50uA which is approx, what you simulated.

Then on the 2nd cycle another 40uA peak is conducted and the voltage rises another xx mV and on the 3rd peak it reaches ~2.6V or a diode Vf =0.4V

For this test the knee voltage Vk appears to reduce with current but we know it also rises with current. So the thing to remember is what is the Vk & tolerance @ some specified forward current. I use 0.6V@ 1mA @ 25’C

Get used to reading datasheets for the VI curve and keep in mind, the tolerance @25’C is due to a series bulk resistance due to process controls and Vk (@ x mA) is fixed, but can shift negatively with rising temp (it’s also a thermometer)

For low currents it has a log VI straight line from Shockley’s Equation then a linear straight line scale from bulk series resistance near rated current.

6
Solving diode circuit with iteration - why doesn't it work?
11
Proof that every circuit with diodes has exactly one solution
2
How to solve a boost circuit (or any switched RLC circuit) in time domain?
1
How these two diodes used in the ciruit protect from the voltage spikes?
3
Complex Voltage and Current in Steady State DC Circuit with Nonlinear Component
0
Diode capacitor circuit, what is the output across the diode?
3
A conflicting result in the diode and capacitor circuit
2
Biased Clipper Circuit