Unusual behaviour between two seperate electrical circuits in a race-car 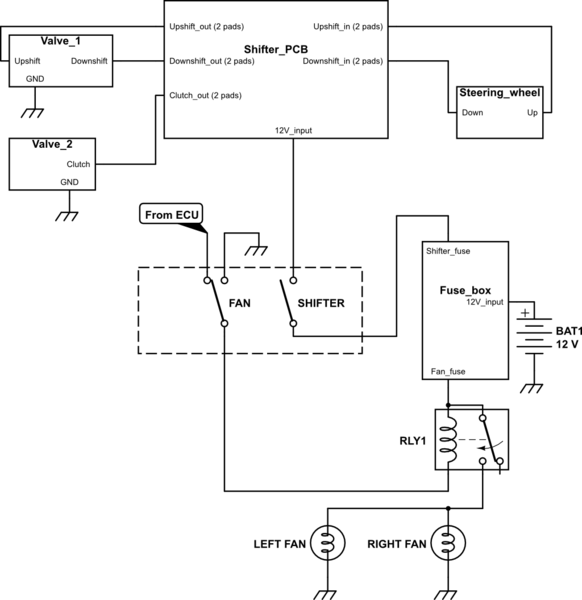 I have designed and created two systems that are currently present in a small race-car.

The first one is a circuit to control the fans of the car. The topology of the system is the following: Battery -> Master switch ->Fuse box -> Relay -> 3-way switch When using the switch, the first mode is to let the ECU (DTA s80) control the fans and the other is to turn the fans on constantly (through the relay).

The second circuit is the electro-pneumatic system that controls the two double 3/2 pneumatic valves responsible for the gear changes. There are two parts in this system. First there is there is the pneumatic part. I am using two valves (one for upshift/downshift and one for the clutch). These valves are controlled by the second part of the system which is the electrical. They are connected via individual cables to a PCB that has as an input two buttons coming from paddles from the steering wheel.The principal of operation is that both pads to whom the cables are connected have always +12V and when an input is detected, the micro-controller (STM32F103) outputs a signal to an analog circuit that grounds one of two pads so that the valve can "see" 12V. Between the fuse box and the PCB there is an on-off switch.

Now there comes a problem. Both circuits work fine except one critical moment. When I have the switch for the PCB to the on position and the 3-way one is either on mode 1 or 2 and I turn the fans off, the upshift valve fires to the piston. Note: These two system are not crossing each other in no point (in fact there are on separate sides of the vehicle).

Does anyone have any idea why there is such a weird behavior ?

I actually found the source of the problem and the solution that worked perfectly fine for my case. The problem was inductive kickback. The solution was to replace my fan relay with a relay with an integrated diode.

Not the answer you're looking for? Browse other questions tagged pcb circuit-design or ask your own question.

7
PCB layout for high ampere
2
Connect pins with same pin designator in Altium footprint
4
PCB track clearance
3
Kicad PCBnew: Cannot figure out why DRC reports unconnected pads
1
Circuit to limit a set of outputs so that only one is on
2
How to mount a PCB in a project box
1
How to use a sprinkler valve in multiple zones?