Opamp output to source and to sink

What is the meaning of to source and sink and how does it influence the output voltage source of an opamp? The input current of an opamp is 0 so, how is it able to supply a output current? Explain me please!!

What is the meaning of to source and sink and how does it influence the output voltage source of an opamp?

Real op-amps have all sorts of non-ideal behavior; they have non-zero output impedance, they have distortion, and they cannot drive the output to the supply rails (even "rail to rail" outputs can't do the last few tens of millivolts). All of those behaviors will happen.

Most often, you'll just notice that you can't drive things to the supply rail. Less often, you'll notice the distortion (this is why only a few op-amps are good enough for audio reproduction), or the output impedance plus a capacitive load will work against the op-amps internal compensation to make the circuit oscillate.

The input current of an opamp is 0 so, how is it able to supply a output current?

The signal input current is nominally zero. But real op-amps have supply pins -- that's where the output current comes from (or goes to, when the op-amp is sinking current).

We'll consider this using the ancient (and not very good) 741 op-amp. 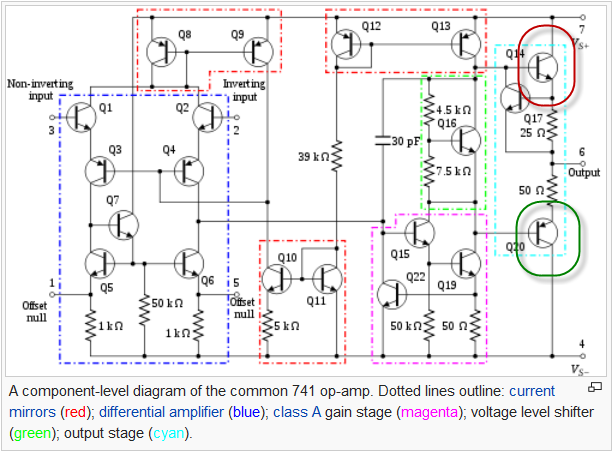 In practice this would work as follows:

If the op-amp output goes above ground then Q14 will be on and it will source (supply) current out to the LEDs. Since the RED is forward biased it will turn on.

If the op-amp output goes below ground then Q20 will be on and it will sink (consume) current in from the LEDs. Since the GREEN is now forward biased it will turn on.

The input current of an op-amp is 0 so, how is it able to supply a output current?

The output power doesn't come from the inputs. It comes from the supply rails - pins 7 and 4 on Figure 1. All those internal transistors are used to control the output transistors, Q14 and Q20, and they adjust their conductance (remember that the are made of semiconductor material) to maintain the required output voltage.

What is the meaning of to source and sink and how does it influence the output voltage source of an opamp?

Sometimes the output stage on an op amp is not symmetric as shown in the op amp schematic below. If the op amp is sourcing current, it can go through the darlington pair. In sinking current the only way to get through -Vee is through the resistor. Since these currents will not be the same, configurations like this the sourcing and sinking current can be different. (doesn't mean this one is, we'd have to know all the components to really analyze it). There are many other different output stages for op amps, so to really know, one would have to look at the ouptut stage for that op amp. 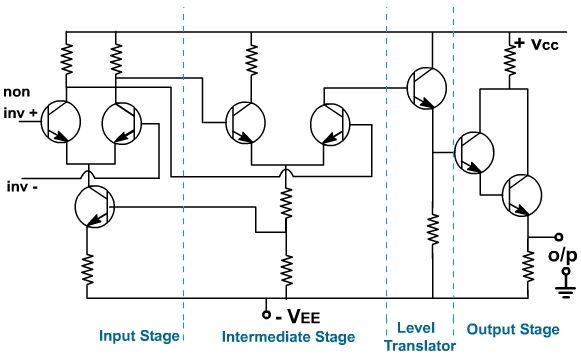 To supplement the other answers:

Most OpAmps (OA) have push pull “Totem Pole” drivers configured as complementary Darlingtons or CMOS drivers that can supply current to the load.

Thru a series of differential gain amplifiers the voltage is amplified from 1e5 to 1e7 while reducing the input current by a similar order of magnitude.

For large signals the internal current limiting sensed by a shunt resistor cuts off the output stage to limit the output current then the voltage is said to saturated, the gain drops to zero and the current is limited to some level by design of OA. So you see , for small signals of current, it is pretty close to an ideal voltage source with 200 Ohms / 1e6 for a unity gain buffer being 200 uohms.

Adding additional complementary emitter followers to the OA output can increase the current gain by another factor of 100 or so and then becomes limited by temperature rise of these and drivers. These also push and pull the output voltage to match the input voltage of any OA differential or single ended input. Putting feedback at these connected emitters eliminates the crossover distortion. ( but reduces full swing by diode drops)

There are tradeoffs with Gain bandwidth (GBW) such that the gain drops to 1 at f=GBW so the impedance rises with f from near 0 to 200 Ohms at say 1MHz for GBW=1e6 and unity gain.

Not the answer you're looking for? Browse other questions tagged operational-amplifier current output source or ask your own question.