As far as I understand, Faraday’s law states that a varying magnetic field through a closed path creates an E-field along the closed path. And the integral of this field we call electric potential or voltage.

And if the loop is an open at one end, I guess all the potential exhibits itself across this gap. Below I assume a varying magnetic field across the wire loops. 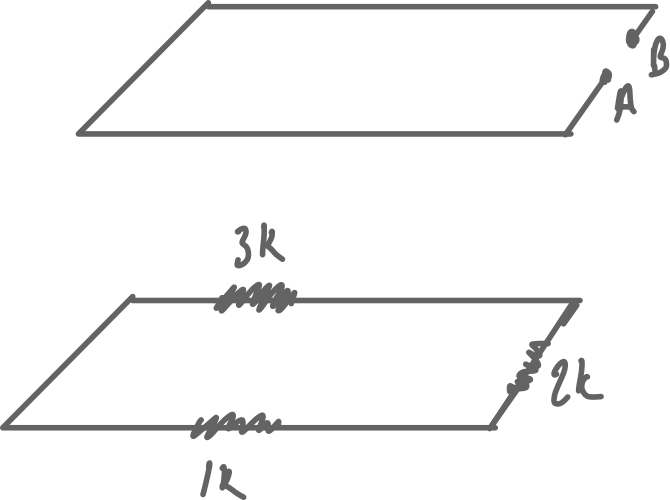 Above the top loop is open at A and B. If we observe 6V across A and B, and then if we replace the same loop this time closed but with 3kΩ, 2kΩ and 1kΩ resistors; can we say that 3V will be induced across 3kΩ, 2V across 2kΩ and 1V across 1kΩ?

If so, what causes the higher voltage across bigger resistors? Is there any formula which shows such a relation, which uses E-field and resistance not the current? Because in the original Maxwell equations, Faraday’s law is about the E-field created by changing magnetic field.

Knowing the magnetic flux through your loop, you can calculate the voltage around the loop.

The continuity equation \$\nabla\cdot\vec{J} = -d\rho/dt\$ tells you that your current density is constant around your loop, since there is no charge being added or taken away.

You would integrate over a distance to turn this into the more common form of Ohm's law \$I = V/R\$.

There's no universally useful solution for Maxwell's equations, all cases are different. But many practically important geometries are well examined and your loop is one of them. Quantities inductance and mutual inductance carry the effect of induction into the circuit theory - there one doesn't think electricity as fields between the wires, but as voltages and currents. It's convenient, but the electric and magnetic vector fields still stand behind all.

You wanted the voltages over the resistors straight from the induced electric field without a slightest hint and usage of current (nor current density, I guess) which the electric field causes. That's unfortunately impossible. We can eliminate the current from the resulted voltage formula, but the derivation of that formula is impossible without current. That's because saying "they are resistors" you take the current along. The meaningful measure for the resistor is resistance and that's defined as U/I, there's no more fundamental criteria for to be or not to be a resistor.

The assumption of the existence of more fundamental definition for resistance is common. The possiblity of the existence of such definition is included to sentence "Resistors obey Ohm's law I=U/R". Georg Ohm found that many materials behave in electric field in such way that current through a piece and voltage over that piece are proportional. The proportionality factor U/I, the resistance, depends on used material and dimensions. Essentially Georg Ohm found that many pieces act as resistors and declared what it means to be a resistor.

About happenings in your loops:

Assuming the dimensions are so short and the transient is so slow that we can omit the radiowaves and resonances, all induced voltage in your open loop really occurs over the gap. That's because the induced electric field moves the electrons. They accumulate at the end of the wire until the field caused by the non-uniformly distributed charge is in balance with the induced field. The accumulation process is actually current. It isn't instant, it takes time. The process can be modelled with a circuit which contains a voltage source caused by external magnetic field, wire capacitance, wire resistance and inductance. The inductance is for the induction in the magnetic field of the accumulation current. The current in the loop changes and it also induces E, which partially cancels the externally induced E.

In your closed loop the resistance has bigger role, it easily hides the effect of capacitance and the resonant behaviour of capacitance and inductance - at least, if the frequency is only 60Hz, the loop size is only few meters and the resistors are kOhms. The field of displaced electrons still cancel partially the induced E, but not totally.

Circuit theory gives to us a model for the induction of the both external magnetic field and the field caused by the loop current. We can think the existing external magnetic field is caused by a current in another circuit and there's mutual inductance between that circuit and your loop. For convenience we assume the capacitance is neglible. As well we assume that the external "primary" circuit is so massive that the mutual induction must be taken into the account only in your loop. Here's the circuit:

Think it as loosely coupled transformer with resistive load R = the total resistance of your loop. The primary circuit has current I1, your loop has current I2 and there's mutual inductance M and loop inductance L2. A=the area of the loop.

In the top line there's 2 phasor equations for sinusoidal current and voltage. The voltage U2 over the total resistance is written in two ways. It's by Ohm's law and the induced voltages together. We can eliminate loop current and get the total voltage over the resistors. It's written as phasors and as the absolute value of the phasor, the RMS voltage.

The external magnetic field is assumed to be sinusoidal. B is it's density (RMS) and H is the field strength, also RMS.

If you let R grow towards the infinity, you get the open loop as the limit case. Loop resonance needs the capacitance. The simplest way to insert it is to replace R in the phasor formula with the impedance of R and C connected in series or parallel.

Taking the radiowaves into the account is a leapfrog in complexity. I skip it.

You should note that loop area A and inductance L2 are not independent, they are both connected to same loop dimensions.

So if we go with the assumption that no-load voltage is 6V and with a single 6k resistor all 6V is over one resistor. You can imagine that there is a 6V battery instead of induced voltage if that helps. Ohm's law says that in this case a 1mA current flows. Now replace the 6k resistor with resistors of your choosing that adds up to 6k, is there a difference? Will identical amount of current flow through each resistor? What does Ohm's law say when applied to each resistor? So yes, 1k resistor has 1V, 3k resistor has 3V over them. Since the resistance is higher, higher voltage is needed to push same amount of current.

Not the answer you're looking for? Browse other questions tagged induction faradays-law or ask your own question.

0
Total changing flux in Faraday's law of induction
0
Clarification on This Transformer Statement
3
How does this RPM sensor work? – Induction in an open circut
7
Can two voltmeters connected to the same terminals show different values? Circuit with induced EMF
2
Possible contradiction between Ohm's Law, KCL, KVL and Faraday's Law of Induction?
0
Electromagnetic farady's law direction
1
What're the differences between eddy current, current generated in electric power generator and inductive crosstalk generated between adjacent lines?
2
Waveform of induced EMF in a basic AC generator
8
Why does analysis indicate that ground lifts do not fix ground loops?
0
Inductor Back EMF Direction Relative to Changing Current