I have a feedback application to set the voltage of a node in which there is considerable loss in the loop. Simulations tell me that a differential voltage gain of 10000, 80dB (roughly about what you normally get from a single open-loop opamp) is not adequate and I would need on the order of 140dB to make the application feasible.

Note that noise is not really an issue in this application (within reason), but a bandwidth of ~1MHz is desirable, which sets a somewhat insane GBW product of \$~10^{13}\$. In addition I need very low input bias current (<1µA.)

A multi-stage amplifier does not seem viable, as this would increase the order of the system and would tend to make it unstable under feedback conditions. Before I even start considering discrete designs and optimizations (or building my own ICs for this application), or simply scratch the whole idea and go back to the drawing board, I would like to know how viable this would be:

I am currently designing around a somewhat hard to get LTC6269IDD-10. A non-unity gain compensated 4GHz GBW op amp. But even this is proving to be a challenge.

Conceptual schematic (note that most parameters cannot be modified and are somewhat random in nature, that includes the resistors, capacitors, and signal source): 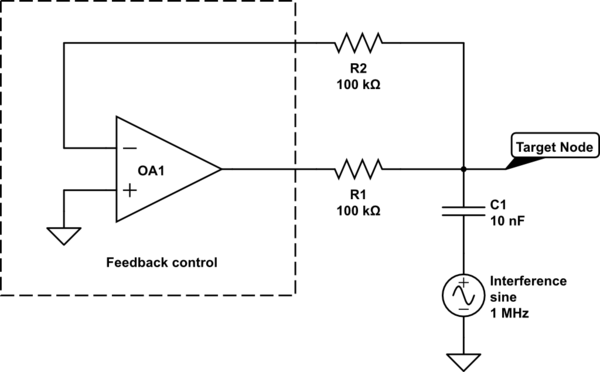 What is the largest gain configurable with an opamp?

What is the largest single-stage/single-pole wide-bandwidth gain/GBW attainable (I seem to recall that a gain of ~200 is about the limit of discrete electronics).

These chopping amplifiers are the highest gains I've seen, at 240dB or higher with a unity gain of 300kHz. Thats a GBWP of 3*10^29, Don't get too excited, they are expensive.

What is the largest dual-stage gain/GBW attainable (most op amps would fall into this category). Could a multi-stage (>3) amplifier be compensated in such a way to make this possible?

IMO the main problem will be noise, especially if the op amps have a high gain feedback network. The problem is the noise of the first will be multiplied by the second, so if you have a gain of 10^6 on the second stage and a 1uVpp noise on the first stage, the second stage will see 1Vpp of noise from the first. 1uVpp isn't going to be useful for most designs.

In all of the high gain systems I've designed, it's best to take care of most of the gain in the first stage. Even resistors become major noise sources at 1MΩ, and if you want a gain of "only" 10^6. 1/F noise is an even larger problem with high gain.

But really, what are you trying to do? Typical analog digital systems have a pre amp that feeds into an ADC. If the noise is gained up, one will only be increasing the number of noisy bits on an ADC. Even if the preamp is not being used for digital conversion, noise still applies in control systems. In my experience it's really SNR that matters, so if that figure hasn't been calculated then it should be.

There are multi stage options, on the preamp stage, the amplifiers can be paralleled for lower noise, with the noise being \$\sqrt(2)N_{amps}\$. Typically with normal op-amps gains higher than 10000 are difficult. I have tried paralleling op amps for lower noise, it works well.

Would a different topology (e.g., Norton or Transconductance amplifier) provide a way around these limitations?

Not that I know of, the way to get around high gain problems is most likely chopping amplifiers which help lower noise. The learning curve is very steep however.

Whatever you do, it is going to be both costly in both hardware and time to design. Now would be a good time to look at the system level requirements and make sure that they are correct and the cost of this design is justified.

The largest practical stable closed loop gains possible (V/V) that are useful would IMO be around 10000.

Here is a single-stage-of-gain opamp, gain about 100,000; was gain-of-ten stable, settling in about 7 nanoSeconds for 1nanoSecond input edge, gain of 11X. 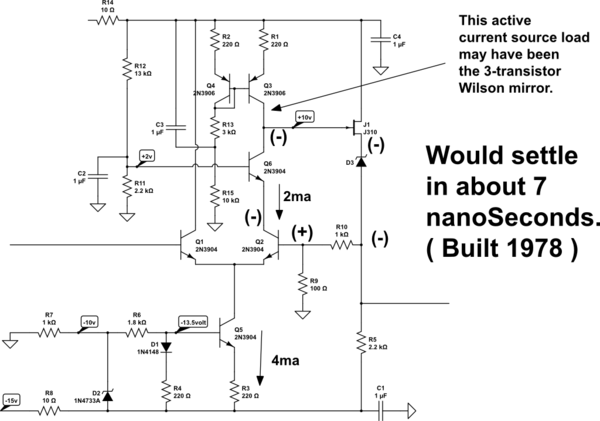 Not the answer you're looking for? Browse other questions tagged analog feedback gain loop-gain gain-bandwidth-product or ask your own question.

26
What's special about “unity-gain stable”?
2
What is the largest gain configurable with an opamp?

2
What's the use-case for gain selection on a DAC?
2
Why Bandwidth Affects Response Speed
2
Working with current feedback opamps [CFA]
0
Gain-bandwidth product proof for open loop/closed loop opamp
15
Why do (microphone) preamp designs tend to limit opamp gain to max 60 dB?
0
Gain-Bandwidth of LTC6409
0
gain of opamp circuit with current output
1
Confusion with the gain concept of an amplifier
9
Opamp stability given in not inverting configuration
0
MATLAB model of an op-amp's Open Loop Gain