Finding the negative feedback loop in the amplifier circuit

Today I was learning about the negative feedback in the amplifier circuits and some quick ways of discovering whether a negative or a positive feedback exist in the circuit by finding a feedback loop and counting the number of pi-s (phase changes) that exist in that loop.

If we look at the general scheme of feedback in a system we can see that the loop of feedback goes from Output->B->+->A->Output and the total phase change is 0 meaning it's a positive feedback. 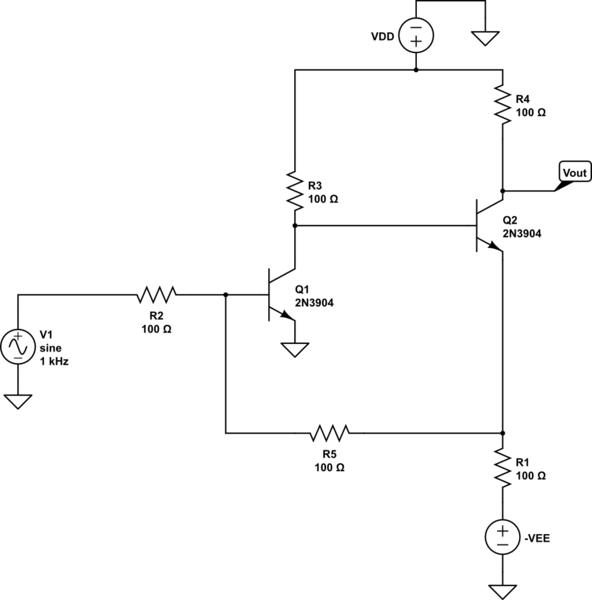 Clearly, there is feedback in the circuit. I know in advance that phase shift of a bjt transistor are: BE=0, BC=pi, EC=0.

Now i need to determine the loop and count the number of pi-s that exist inside the loop to determine which feedback it is. To me a logical way of determining this was going from Vout to the input and back and i did it like this:

This is however not the way they showed the loop in class as the went like this:

Why is my way of finding a loop wrong and theirs right? Isn't the loop always from Vout to Vin or is there something I'm not understanding here?

I'm primarily in understanding this method rather than calculating and figuring out the sign.

Why is my way of finding a loop wrong and theirs right? Isn't the loop always from Vout to Vin or is there something I'm not understanding here?

No, the loop isn't always from \$V_{out}\$ to \$V_{in}\$. A loop happens if you can trace the signal path in a loop. In this case the loop that your prof is talking about is the common-emitter stage around Q1, which is applied to the base of Q2, where the emitter of Q2 follows Q2's base voltage. Then that emitter voltage is applied to R5, which feeds back to the base of Q1. Yes, \$V_{out}\$ is being picked off of Q2's collector -- but that's not part of the loop in question. 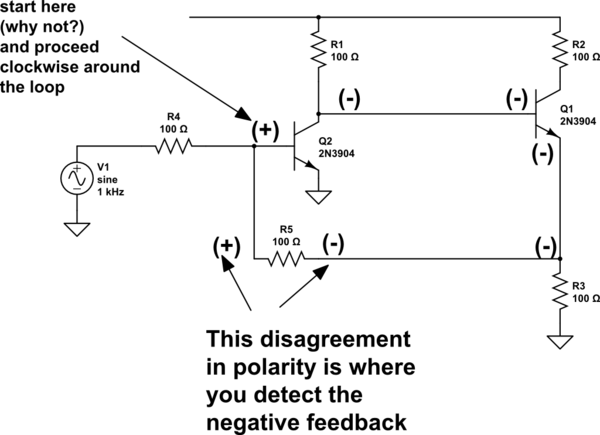 Not the answer you're looking for? Browse other questions tagged operational-amplifier bjt feedback negative-voltage or ask your own question.