I am watching this video.

at 1:05 it shows a diode as "blocking" current, even though there seems to be a return path through the diode and back to the battery via the capacitor or light bulb? 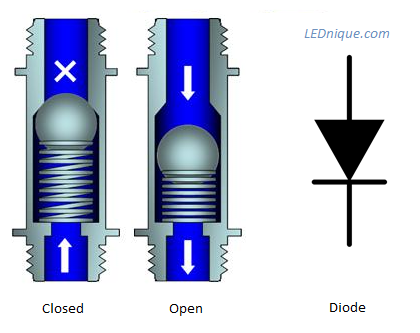 Figure 1. A diode is like a one-way valve in a water circuit. Source: What is an LED.

Diodes are electrical non-return valves. If you look at the check-valve in the figure above, it should be clear that the spring normally keeps the ball in position and prevents back-flow. When “forward-biased” the ball shut-off can be moved against the spring but it will take some initial pressure to move the ball. This results in a pressure drop across the valve: the pressure downstream will be less than the inlet pressure.

In a similar manner the PN junction causes a voltage drop. For silicon it is about 0.7 V. Since there is a PN junction in the base-emitter of your transistor you can expect a 0.7 V drop across it when forward biased.

I have written a little more on the topic of LEDs in the linked article but the principle is the same as LEDs are light-emitting diodes.

At 1:05 it shows a diode as "blocking" current, even though there seems to be a return path through the diode and back to the battery via the capacitor or light bulb?

This would be analogous to having a direct feed into the bottom of a water tank in your attic. You don't want it to drain back out when the water pressure drops so the addition of a non-return valve in the line - the diode - prevents this. Watch the video again and you'll see that the diode only conducts when forward biased.

It would be nice if you mention what is your knowledge in the electronics and physics. It all comes down to physics we are talking about the diode. There's something called potential barrier that plays the major role during the conduction of current through the diode. The potential barrier(measured in volts) is the minimum voltage required across the diode to conduct in the forward direction(direction the diode is pointing). Typically the value is 0.7V for silcon diode. This implies that the n-side of the diode is at 0.7V with respect to the p-side. So in order to conduct through the diode, the diode must have p-side at higher potential than the n-side. This is called forward biasing.When the diode is forward biased, the diode conducts current in the direction it(diode) is pointing to. This is the case for forward conduction through diode.

Its a nice way to explain something with graph. Here's a graph showing the V-I curve for a typical silicon diode 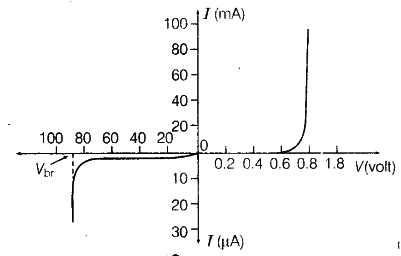 Increasing value of V in forward biasing implies incresing the potential of p-side. Once the p-side raeches 0.7V, the n-side and p-side are at same potential, so no any potential barrier now. Now, when the p-side's potentail is increased further, the diode is forward biased and allows significant current to flow through the diode.

In the reversed bias zone, note that the unit of current is in microAmps. When the reverse bias voltage is less than Vbr(Breakdown voltage), the current is few microamps which can be considered as "no conduction". Beyond the value of Vbr, there is whole new story again. The normal diode is not supposed to be operated at this value of reverse bias. But there are something called Zener diodes which are diodes but operating at reverse bias at value higher than Vbr.

Setting aside the topic of forward biasing a diode, at 1:05 in your video the input side of the diode (or, the anode) is connected to ground.

In an ideal circuit, when the switch is closed there is a direct 0 Ω connection to ground, which shorts out the rest of the circuit.

0
Will current flow beyond the diode?
4
3.3v Zener Diode as Clamp not working
0
Current through a resistor and diode in series
3
Do I need a Schottky diode as a flyback diode with PWM @ 30khz?
0
Boost converter, how does diode allow current from inductor to flow towards capacitor?
0
What kind of magic is energizing the coils in this simple stepper motor driver?
1
Does return path need a diode?
0
Are there two band contributions to diffusion current at the PN (diode) junction?
0
What diode do I use when charging 2 batteries in parallel?