I made a simple LED circuit using a battery, a variable resistor, and a LED. When the light intensity satisfied my demand (I do not need the full intensity) by changing the resistance, the condition was: R1 voltage: 0.5V LED1 voltage: 2.3V Current: 86 uA

Now, I want to add one more LED in a series to make a dual LED system. But I don't know how to calculate the appropriate supply voltage and resistor to keep the light intensity the same (= same current of 86 uA through 2 LEDs). For example, what should be the resistance if I use 4.5 or 6V supply? Any thoughts or suggestions? 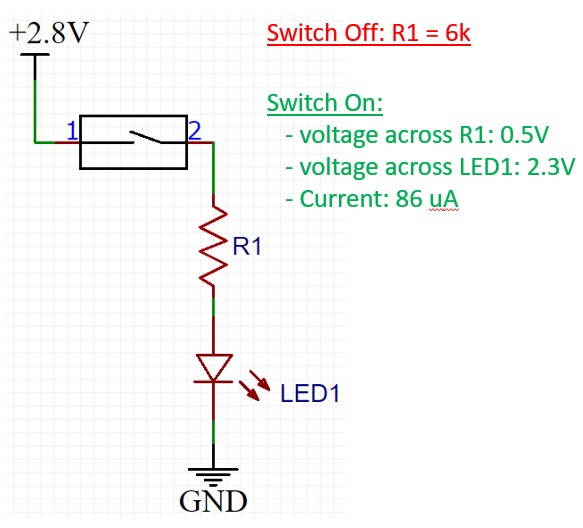 Okay, now I update a new circuit to supply 5.5V using a voltage regulator. It is battery powered (6V: 4 x 1.5V AA), so I want to keep the current (or voltage) constant ( ~ 86 uA) during the period of operation. Do you think this circuit would work as intended? (Let's ignore the product error between the same LEDs) 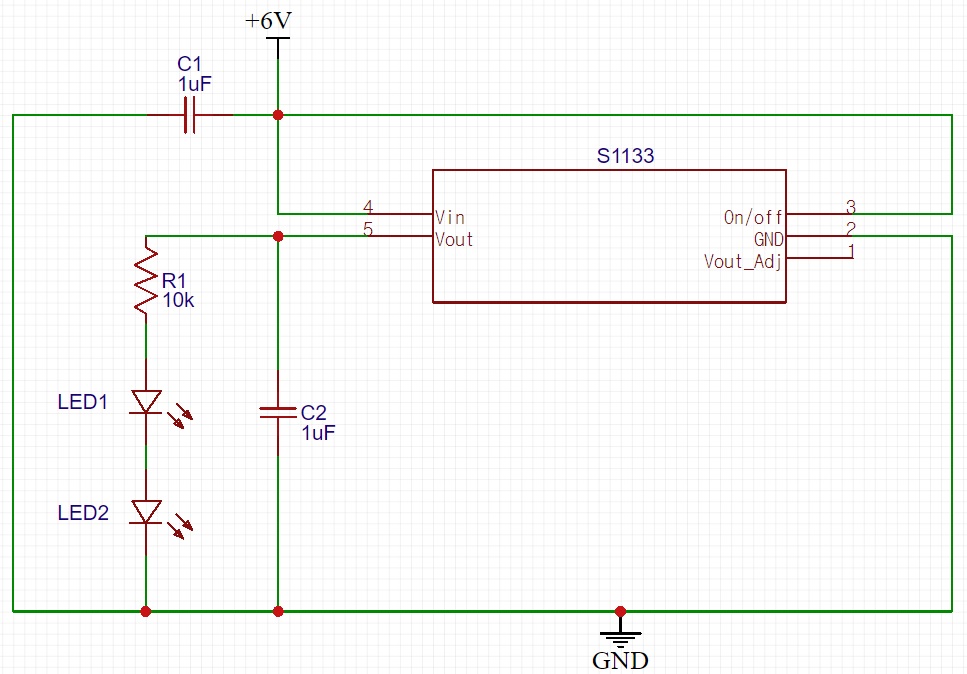 Or what about this design for the parallel arrangement?

I want to supply the constant voltage while the battery voltage goes down. That's why I need to use the voltage regulator.

For a supply voltage of 4.5V, what you're asking is impossible. Apparently, if you run 86uA through your LED, it has a forward voltage of 2.3V. (Forward voltage increases as the current through the LED increases.) So for two LEDs in series you'd need at least 2*2.3V=4.6V

On a side note: Applying excactly 4.6V to your two LEDs in series without a resistor is not a good idea. LEDs need a series resistor, or something else to regulate the current through the LED. LEDs work on constant current, not on constant voltage.

Now looking at the datasheet of your LED, you should realise that you're not even close to using the LEDs at the intended current and brightness. The LED is intended for a current somewhere around 350mA, where their light intensity is quite high. They are called Xlamp for a reason... :-) You might get better results with an LED intended for lower current and brightness. When operated near the recommended or intended current, you will probably get more consistent light output.

Also, as others have commented already, brightness might be different for the two LEDs, even though the current is the same. Especially at these low brightness levels, a small difference in LEDs will be noticeable very quickly. 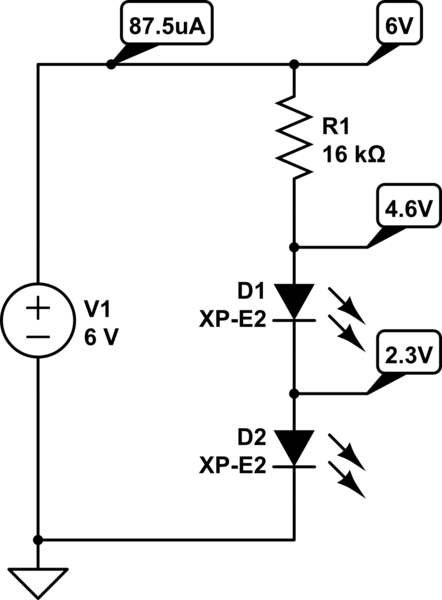 It does not matter what the supply voltage is, you just need two resistors and two LEDs. You should not need a regulator, it's a total waste. Any voltage above 2.3 V will be sufficient.

You can try two in series with a higher supply voltage and a higher resistance, that may work fine. Seems like additional and unnecessary work.

At this low current most of the recommendation for LED design go out the window.

At this low current it would be acceptable to power the LEDs without a resistor if you can supply the exact voltage required (e.g. 2.3V).

3
How to drive high power LED and Arduino by the same power source?
0
Designing a power supply that drives an LED array supply
1
Side LED - Orientation wrong
1
How to drive multiple LEDs from a Li-ion battery (with varying voltage)?
0
Drive 3 5050 SMD RGB LEDs with 12v Lead-acid battery
0
Indicator LED pulling up line
1
Explain this tiny circuit (2 LEDs in parallel)
0
How to connect Multi-Directional Switch in EasyEDA
0
Connect different "blinking LEDs" in parallel