Questions about Inductive Kickback and what causes an inductor to discharge?

This is most likely a dumb question, just for some reason I have just forgotten the fundamentals about how charging and discharging work.

Essentially my question is for this simple circuit: 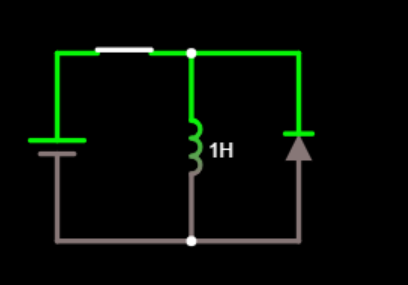 Is it due to the diode voltage drop? Hence charge out is always less than charge in? (I know its a bit of a dumb question but I would like to just clear my confusion).

Also if the diode wasn't there and say the inductor had charge in it already (the switch is open at this time) and say the diode shorted completely, no charge will be lost will it?

The inductor does this by becoming a power source using the energy stored in the magnetic field to produce a voltage as high as necessary to push that level of current through any obstacles so that the current flowing through the inductor is the same. If the easiest path is across the air gap of the open contacts of a mechanical switch or relay, the voltage required to spark across that air gap will be very high so that's the voltage that will be produced. That requires a lot of energy so the current will collapse to zero quickly.

If the easiest path is something like a diode then then the voltage (i.e. the diode's forward voltage drop) required to push that current won't need to be so high and the energy stored in the magnetic field lasts longer so the current drops more slowly.

Not the answer you're looking for? Browse other questions tagged power-electronics inductor kickback or ask your own question.

3
What do you call it when you add energy to an inductor?
14
Questions About Inductors
1
Differences between inductor and electromagnet?
3
Using a capacitor instead of inductor in a switching regulator, and viceversa
0
Complete discharging of Initially charged capacitor through Inductor
1
(THEORY QUESTION) If a diode was not placed in a buck convertor, when the switch is off would the load still be powered on?
1
Capacitor voltage in buck converter and how it steps down voltage
2
How can I use the voltage generated from inductive kickback?
2
Why is inductive kickback not V=IR?
0
How to find current through inductor when connected in series with an ideal diode?